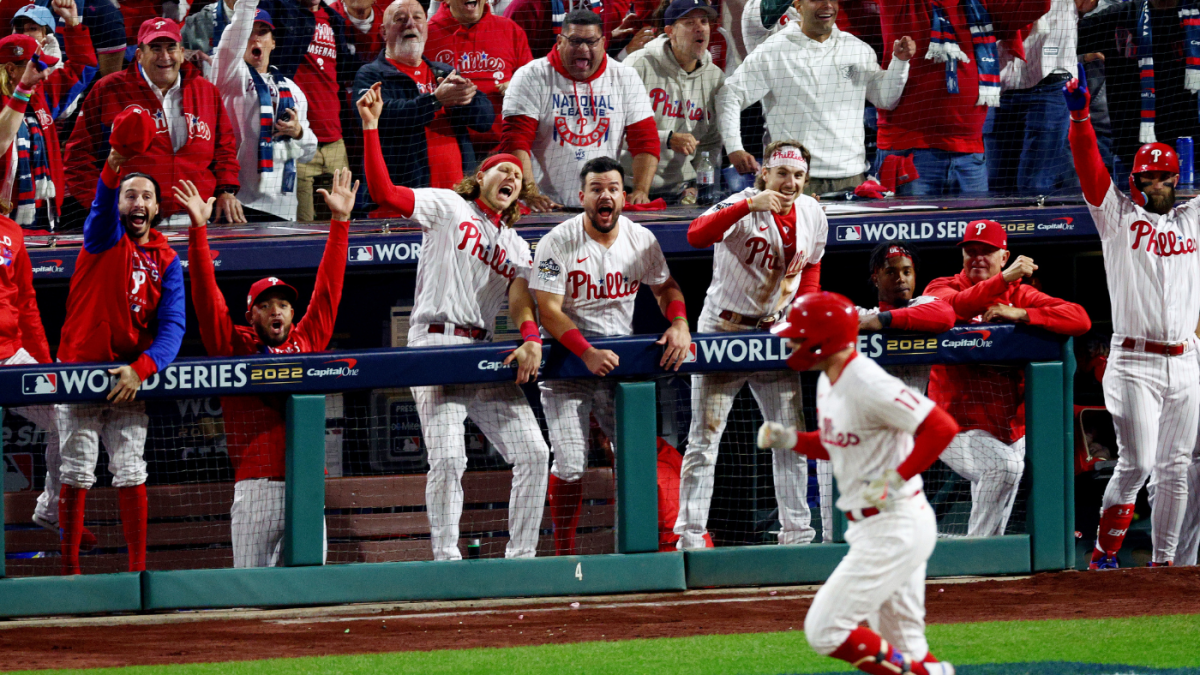 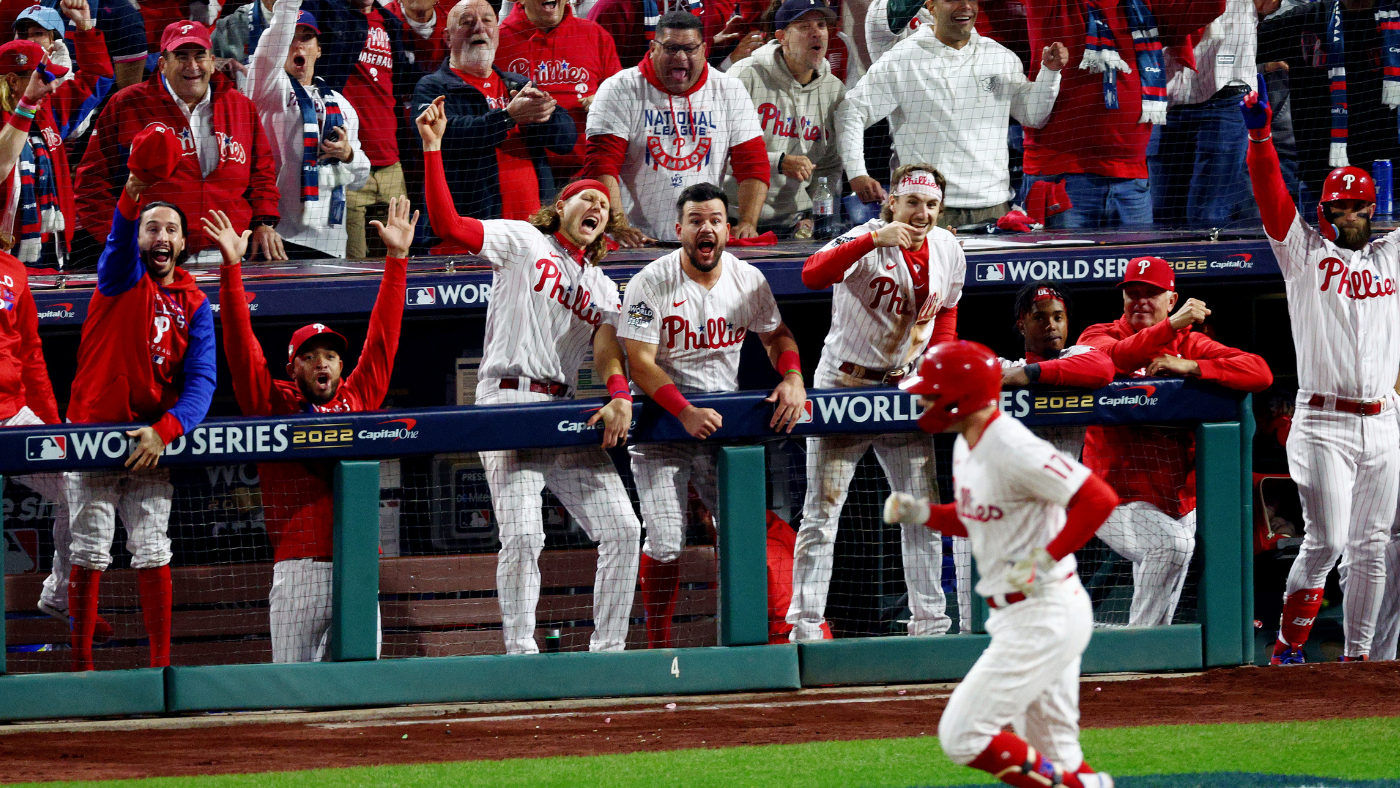 PHILADELPHIA – That was an emphatic performance, huh?

In the first World Series game in Philadelphia since 2009, the Phillies wowed their home fans with an onslaught of home runs, clubbing five homers off Astros starter Lance McCullers, Jr. and making him the first pitcher in World Series history to allow that many longballs in a game. It started with Bryce Harper in the first inning, continued with Alec Bohm and Brandon Marsh in the second and then Kyle Schwarber and Rhys Hoskins dropped the hammer with back-to-back jacks in the fifth.

Along the way, an electric group of Phillies fans in Citizens Bank Park were having the time of their collective lives.

The final score was 7-0 and the Phillies are now in the driver’s seat to win the World Series with a 2-1 lead.

I couldn’t help but think back to a sentiment that I offered back in August a few times in my weekly power rankings: The Phillies have the most potential variance of any contender — to the point that it wouldn’t surprise me if they won the World Series or lost something like 12 straight games and missed the playoffs.

They lost 10 of 13 through the middle of September and flirted with missing the postseason. And now, they are just two games away from winning it all.

I also couldn’t help but think back to them signing two big bats that most people believed should be relegated to DH duty in March.

News broke that they agreed to terms with Kyle Schwarber on March 16. Surely he’ll DH, we thought. On March 19, it was Nick Castellanos. Well, maybe they’ll take turns. To be clear, first baseman Rhys Hoskins probably profiles as a DH, too. I loved it, by the way, and mentioned it several times in the power rankings. If there aren’t solutions to make it a well-rounded ballclub, just embrace the boom-or-bust in the lineup and grab the two available sluggers. There’s no reason to run away from who you are, and the Phillies embraced it.

Meanwhile, early in the season it was revealed that Bryce Harper has a torn UCL, which leads to Tommy John surgery in pitchers. He can still hit, but he can’t throw. So he has to DH. This meant the Phillies were fielding a lineup with three DH types in the field.

It’s a flawed team. They score very poorly in most defensive metrics (except, it should be noted, that Gold Glove catcher JT Realmuto is exceptional). They can run very cold at times (see their losing streaks that first got Joe Girardi fired and then later threatened to keep them out of the playoffs). Obviously, the “bust” part in boom-or-bust means you have to take the bad with the good.

The good is so good, though. They rake in spurts, and it’s a beauty to behold. We’ve seen it throughout the playoffs as Schwarber, Harper, Realmuto and Hoskins have come through with a litany of extra-base hits. Castellanos hasn’t been hitting at all, but he has actually made two big catches in the World Series — possibly saving Game 1 and then setting the tone on Jose Altuve’s leadoff liner in Game 3. Supporting cast members like Bohm and Marsh and Bryson Stott fit right in. Jean Segura grinds out at-bats.

Hoskins said it’s “contagious” how the lineup feeds off each other. “It’s a fun thing, right?” he said. “We’ve been having a lot of fun lately. Obviously, we’re where we are. I think to see a lot of different guys get in on the action is what makes us proud.”

“I think all year we’ve kind of known what we have and felt good about our team and knowing that everywhere you look on our roster we got really good players, some experience,” Bohm added. “So we should be confident. I think the more you show yourself you belong in these situations I think that confidence just naturally grows.”

It’s such a fun group to watch as a spectator. It has to be incredibly annoying to watch from the opposing side, of course, when they are on one of their heaters.

“Anyway you put runs on the board is pressure,” Castellanos said, noting that their huge comeback in Game 1 of the Wild Card Series was done via small ball. “Traffic is pressure. Home runs are pressure, too. They know that every single person in our batting order could hit a home run at any time. That’s pressure.”

“I think the thing that to me is more impressive than that is just the at-bats and how guys aren’t trying to go up there and just hit homers,” said Bohm. “We’re hitters. Guys were working at-bats. Guys are taking singles the other way. And sometimes they make a mistake and we get ’em.

“But I think it’s just a collective group effort. And just having good at-bats and trying to move the line along and get the next guy up and set him up for success. You look back and, well, Schwarber hit one 450 feet, you know. Bryce is coming up now. You know, it’s a deep lineup. So I think when we get momentum and guys are building on each other, it’s just kind of what happens.”

As for those on the opposite side, the Phillies have been the Kingslayers this postseason. They have been heavy underdogs in three of the four series and were slight underdogs against the Padres. They took out the NL Central champion Cardinals before dispatching of the NL East champ, 101-game winner and defending World Series champion Braves. Now they have the Astros on the ropes.

This is an Astros team that has won four of the last six AL pennants. Houston won 106 games in the regular season with a juggernaut +219 run differential. This team also swept the AL side of the playoffs, taking down the Mariners in three games before the 99-win Yankees in four. It’s a deep team that was firing on all cylinders and well rested. Before the series started, it could have been argued that the Astros don’t have a weakness. Not a glaring one, at least.

Heading into the series, one of the storylines was the contrast in the two. This was the biggest difference in regular-season wins between the two combatants (106 vs. 87) since 1906. It was David vs. Goliath. When the Astros sprung out to a 5-0 lead in Game 1, I actually thought to myself, “uh oh.” I’m always rooting for seven games for dramatic purposes and at that point got worried it would be a sweep.

Instead, the Phillies erased a five-run deficit to win in Game 1, a true World Series rarity that hadn’t happened since 2002. And they just pounded the Astros here in Game 3.

The flawed underdog is standing toe to toe with the titan. In Philadelphia. Hmmmm. Sounds like Rocky Balboa, no? The quintessential Philadelphia underdog story. He didn’t win the title until Rocky II, of course, but maybe, just maybe, these flawed underdogs are here to finish the job in their first try.

The Phillies also know the battle is far from over.

“Those guys are a good team,” said Hoskins. “They’ve been pegged as the best team in baseball for a few years for a reason. They’ve got good players and good arms, so we’ve got our work cut out for us for sure, but we definitely will enjoy this tonight and talk about what went right for us. We’ll talk about what we could do better for tomorrow and get after it tomorrow.”

They’ll get after it with a 2-1 series lead. They’ve embraced their flawed nature from the get go. They’ve taken their lumps on the bust parts of the season. They have now ridden a boom to an 11-3 postseason record. Two more wins before three more losses and they’ve got rings.

Those last forever, flawed team or not.