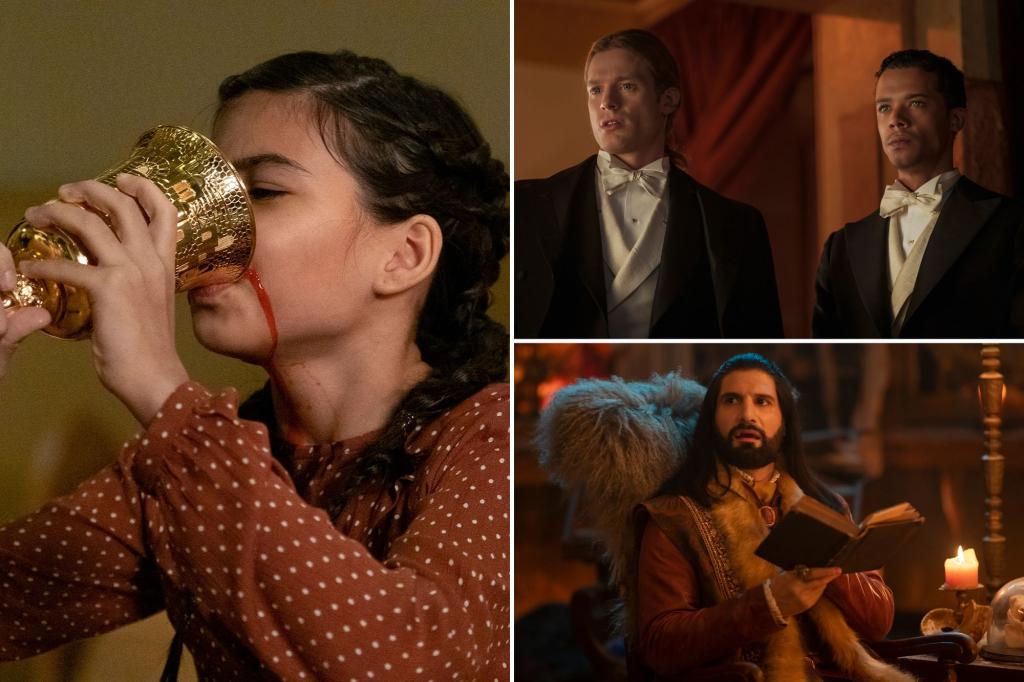 It’s a fang-tastic time in television.

Vampires are back in a big way after climbing into their coffins in recent years after hitting it big on “True Blood,” “The Vampire Diaries” and all the “Twilight” movies.

But then it seemed as if Hollywood sucked all the blood out of the trend, rendering it lifeless for nearly a decade … until now.

The undead never die, of course — there’s even buzz about a potential “True Blood” reboot — and whether you like your bloodsucking fiends to be serious, funny, sexy, or playful, there’s a menu of recent shows with different takes on the timeless spooky tale.

“Interview with the Vampire”

Anne Rice’s classic 1976 novel (also a 1994 movie starring Brad Pitt and Tom Cruise) has undergone a sexy modern facelift. In this version of the story, Louis (Jacob Anderson, “Game of Thrones”) still tells the story of his life (and death) in 1910 New Orleans to a journalist. Here, he’s a black man, and the sexual undertones of his relationship with his mercurial vampire sire Lestat (Sam Reid) are more obvious. It’s a thoughtful take on a familiar story, and it has bite.

“Let the Right One In”

Based on the 2004 novel of the same name (that was also a 2008 movie), this series place vampires in the context of a coming-of-age tale about Mark (Demián Bichir), a father raising his 12-year-old daughter Eleanor (Madison Taylor Baez), who has been a vampire stuck at that age for a decade. The father and daughter try to live as regular a life as possible while he searches for a cure.

This one is for audiences who are nostalgic for “Buffy The Vampire Slayer” as well as “The Vampire Diaries,” since it’s got elements of both (and the latter’s co-creator, Julie Plec, also helms this series). Based on a popular teen books, it’s set in a society that has a strict caste system between different groups of vampires, and follows half-vampire Rose Hathaway (Sisi Stringer) as she navigates forbidden love, friendship, and trains to ward off evil bloodsuckers.

Where to watch: Peacock.

“What We Do in the Shadows”

With four seasons behind it (it’s been renewed for two more), this hilarious mockumentary-style series is, thankfully, sticking around for a while. It follows vampire roommates Nandor (Kayvan Novak), Laszlo (Matt Berry), Nadja (Natasia Demetriou) and “energy vampire” Colin Robinson (Mark Proksch) as they live in present-day Staten Island and don’t do a very good job of blending into human society.

Where to watch: Hulu.

Although Netflix canceled this after it premiered in June, the lesbian vampire show is still available to stream and it’s a different spin on the genre. It follows two teen girls — one from a prominent vampire family, one from a family of slayers — as they fall in love while navigating high school, various creatures and monsters and their families’ expectations.

Where to watch: Netflix.

This unique show is set in an underground town in Australia, and it follows Indigenous vampire hunter Tyson Walker (Collins), and his adopted daughter Shanika (Shantae Barnes Cowan) as they protect their unusual community from creatures of the night. It’s a spin on an age-old tale that has many fresh elements.

Where to watch: AMC+ (streaming).