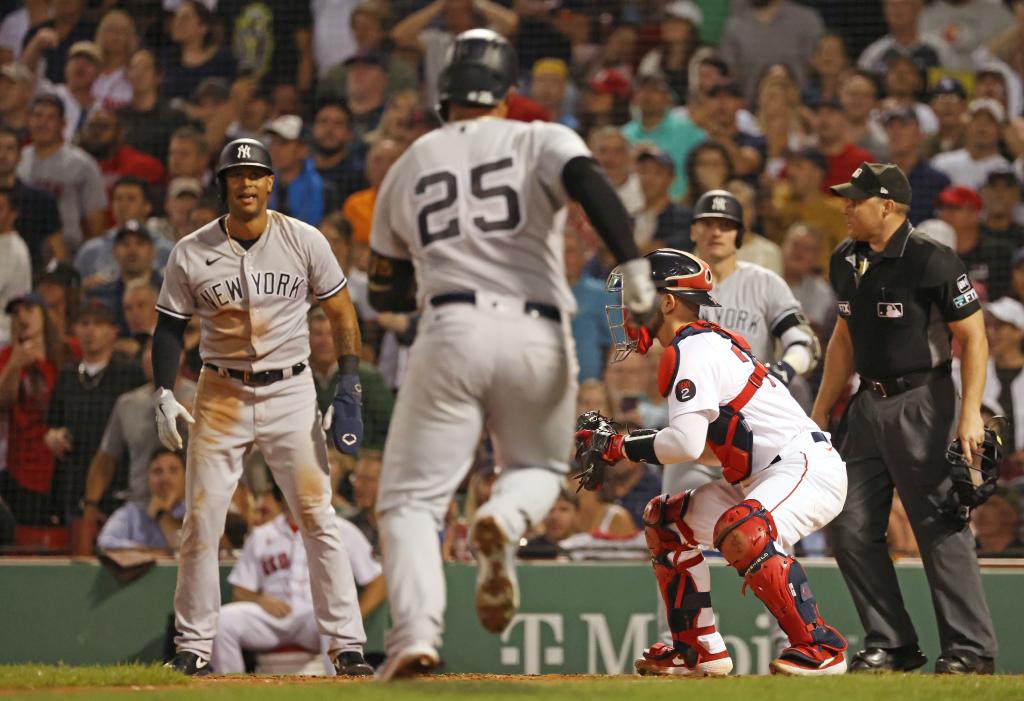 BOSTON — The way Gleyber Torres has been swinging the bat lately, he doesn’t need any extra help from opposing teams.

But the Red Sox served up a Little League three-run home run to him on Wednesday night that keyed the Yankees’ 5-2 win at Fenway Park.

A night after smacking the game-winning three-run double in extra innings, Torres had another strong effort, going 3-for-5 with three singles. But the third single turned into a doozy, courtesy of the Red Sox, and changed a scoreless game into a 3-0 Yankees lead.

With runners on first and second and two outs in the fifth inning, Torres roped an RBI single to right field. Alex Verdugo’s throw home trying to nab Hicks was late, but Torres had taken a wide turn at first base — trying to protect Judge as he raced for third, Torres said — and was seemingly dead in the water for the third out.

But catcher Connor Wong’s throw to first base sailed into right field, allowing Judge to score from third and Torres to hustle all the way around to dive safely into home plate. It was ruled a single and a three-base error.

“Sometimes Gleyber thinks he’s invisible out there. Sometimes it works,” manager Aaron Boone said with a chuckle, adding that his thought process on the play was, “No, no, yes!”

Judge was pumped up on the play, emphatically signaling safe from behind the plate before going to pick up a tired Torres off the ground.

“I was a little nervous in the beginning because I didn’t want to be thrown out at home plate,” Torres said. “I was exhausted, but happy to do something.”

Torres has been doing plenty lately. The multi-hit night was his third in his last four games, a stretch in which he is hitting 8-for-19 with nine RBIs to help spark the Yankees’ shorthanded lineup.

In the ninth inning, Torres helped bring home an insurance run, again with some help from the Red Sox. With Tim Locastro on second base and one out, Torres drilled a 407-foot fly ball to dead center field, where it bounced out of the glove of Abraham Almonte just in front of the garage door. It was ruled a two-base error instead of a double, but it scored Locastro for the 5-2 lead.

It wasn’t just Torres’ bat that stood out on Wednesday night, though. He also added some heads-up baserunning, stealing third on Wong’s throw back to pitcher Bryan Bello in the fourth inning.

“I’ve just seen many videos of the catcher,” Torres said. “Sometimes he throws really slow to the pitcher. All season long, we’re really aggressive on the bases and particularly now. Just tried to keep going.”