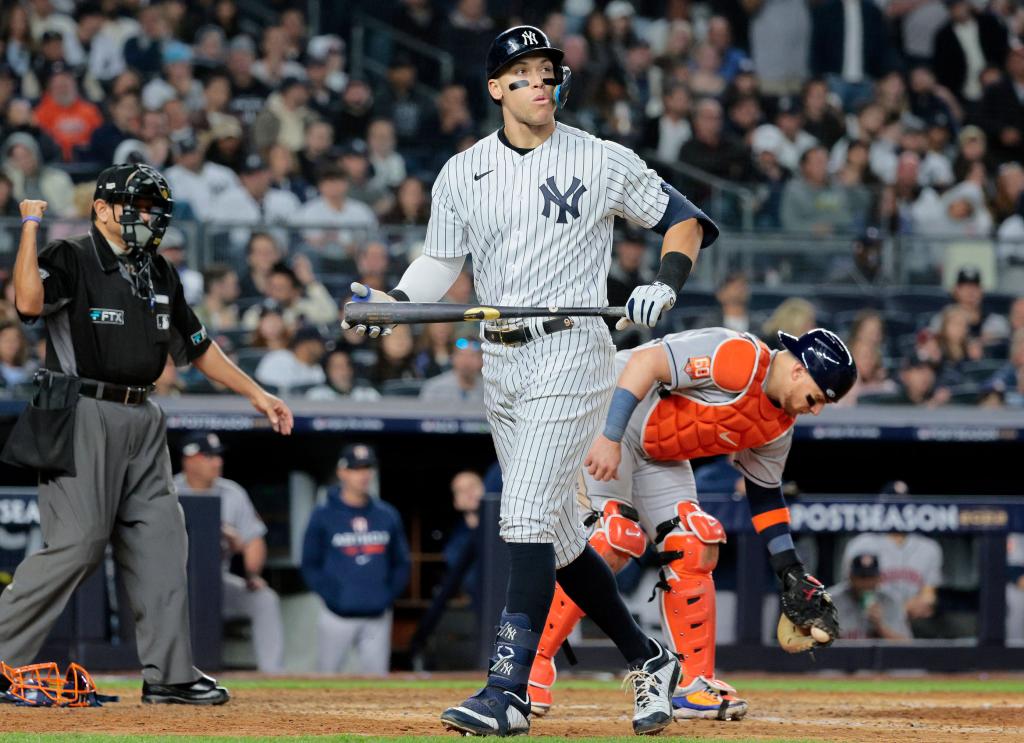 Imagine “Citizen Kane” without being shown what “Rosebud” is. “Friends” without resolution on Ross and Rachel. “The Great Gatsby” without its final page.

Is Aaron Judge’s unforgettable season really going to end so forgettably? Is the Judge Era in Yankees baseball going to be remembered for the inability to even reach the World Series because they notably could never solve the Astros?

Judge carried the Yankees in good times, and especially in bad, during one of the greatest regular seasons ever. But he has been no postseason weightlifter. He was a co-conspirator in historic offensive ineptitude during these playoffs. But, of course, he is Judge. So he is no sidekick to the badness. He is the face of it.

The Yankees have played 10 games against the Astros this season and the only two they won — hell, the only two in which they have had a lead after any of the 91 innings these teams have played in 2022 — came on Judge walk-off hits in two late June games. Then, like now, the Yankees go as Judge goes.

Thus, the Yankees are about to go home.

Which means the conversation is about to shift from envisioning Judge’s free agency to the reality of free agency. Thus, this might be the year in which we remember that Judge ended the season as a giant and ended the offseason as a Giant. And that, in between, he came up small. That in between the love fest with the Yankees crowd actually took a detour to jeers.

Judge had a miscommunication on defense with Harrison Bader to help gift the Astros two runs in the second inning and, with one final chance to perhaps launch his team back into the game, he grounded out with two on and two outs in the eighth.

The Astros won 5-0. They lead this AL Championship Series 3-0. Thus, for the third time in six years — the entire Judge era — the Yankees are on the brink of being eliminated in the ALCS by the Astros. Their excuses (sign-stealing, buzzers, opening of a retractable roof) are like their performance against Houston — getting worse. They lost in seven games in 2017 and six games in 2019 and are on the doorstep of humiliation this time.

The Astros, in their sixth straight ALCS, are just better. Period. The Yankees? They have never gotten closer to the World Series in this period than they did during Judge’s rookie season (2017), even after taking away one of Houston’s aces (Cole) following the 2019 ALCS loss. These Yankees have played the postseason bully, capable of beating up on weak AL Central teams and crumbling before the Rays once, the Red Sox twice and likely now the Astros three times.

Even without Cole, Houston has assembled a dynamic staff. The Yankees did not hit much against the Guardians. But those were the Guardians. They still found a way through. These are the Astros. It is just a different beast. And the Yankees are trying to win without the professional at-bats of Andrew Benintendi and DJ LeMahieu, with a diminished Matt Carpenter and a decrepit Josh Donaldson.

That only heightened the need for Judge to emulate the MVP-level player who hit an AL-record 62 homers and spent six months delivering one huge hit after another. But that Judge has not shown up in these playoffs, even though he hit two homers against Cleveland.

Game 3 of this ALCS was the worst. Bader and Judge are probably the Yankees’ two best defenders. Christian Vazquez lifted a fly ball between them that should have been the third out of a scoreless second inning. Instead, Judge verged on Bader, who had the ball go off his glove for an error. Chas McCormick followed with a short-porch two-run homer and the Yankees were in chase mode again.

They had bemoaned that open roof in Houston that perhaps kept a Judge drive to right in the eighth inning of Game 2 from getting out and giving the Yankees a late lead. It would have been a homer in Yankee Stadium. But neither Judge nor anyone else on this bedraggled offense could get the ball over the fence at the actual Yankee Stadium.

Cristian Javier had pitched the best game against the Yankees this season, throwing the first seven innings of a June 25 no-hitter with 13 strikeouts. He was not as crisp Saturday, yet still yielded no runs on one hit in 5 ¹/₃ innings. He only threw a first-pitch strike to six of 19 hitters. Yet, the Yankees could do nothing, even ahead in the count.

These are the moments the Yankees look to Judge for magic. Instead, he struck out twice more. He is 5-for-32 with 14 strikeouts this postseason. Against Houston, he has one hit in 12 at-bats. The Yankees as a team are hitting .128 in the first three games.

You need to be neither jury nor Judge to see the obvious. The Yankees’ only path to overcome a superior team living in their heads would be if their best player rose to this moment.

That has not occurred.