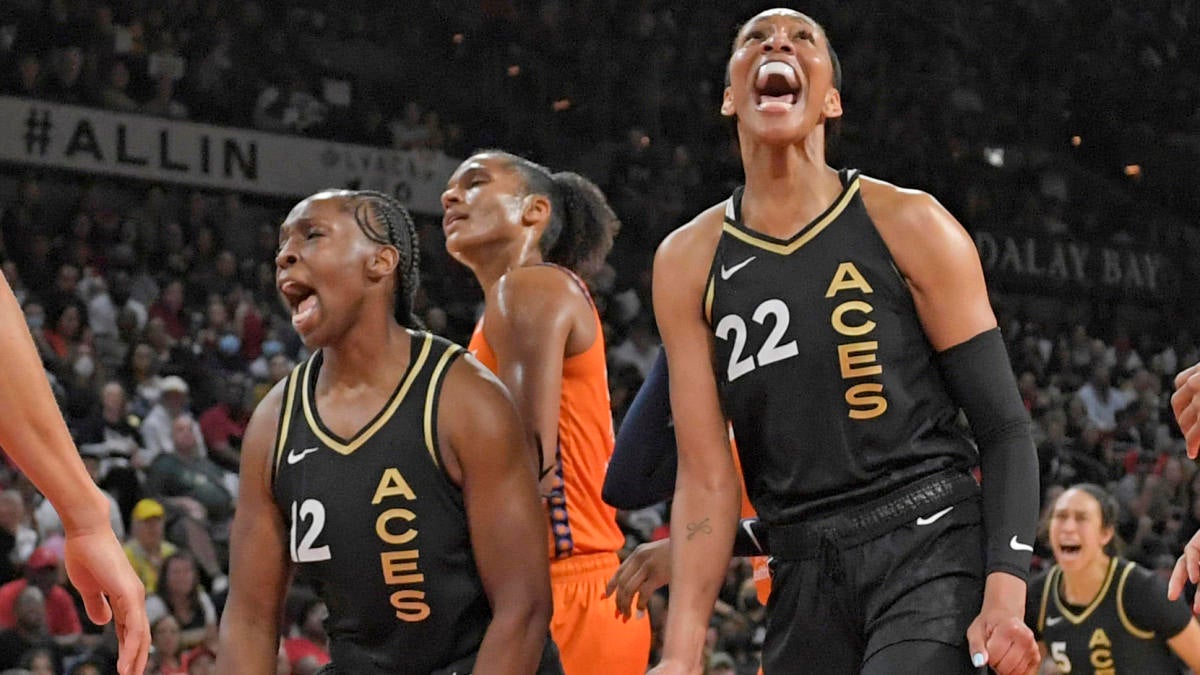 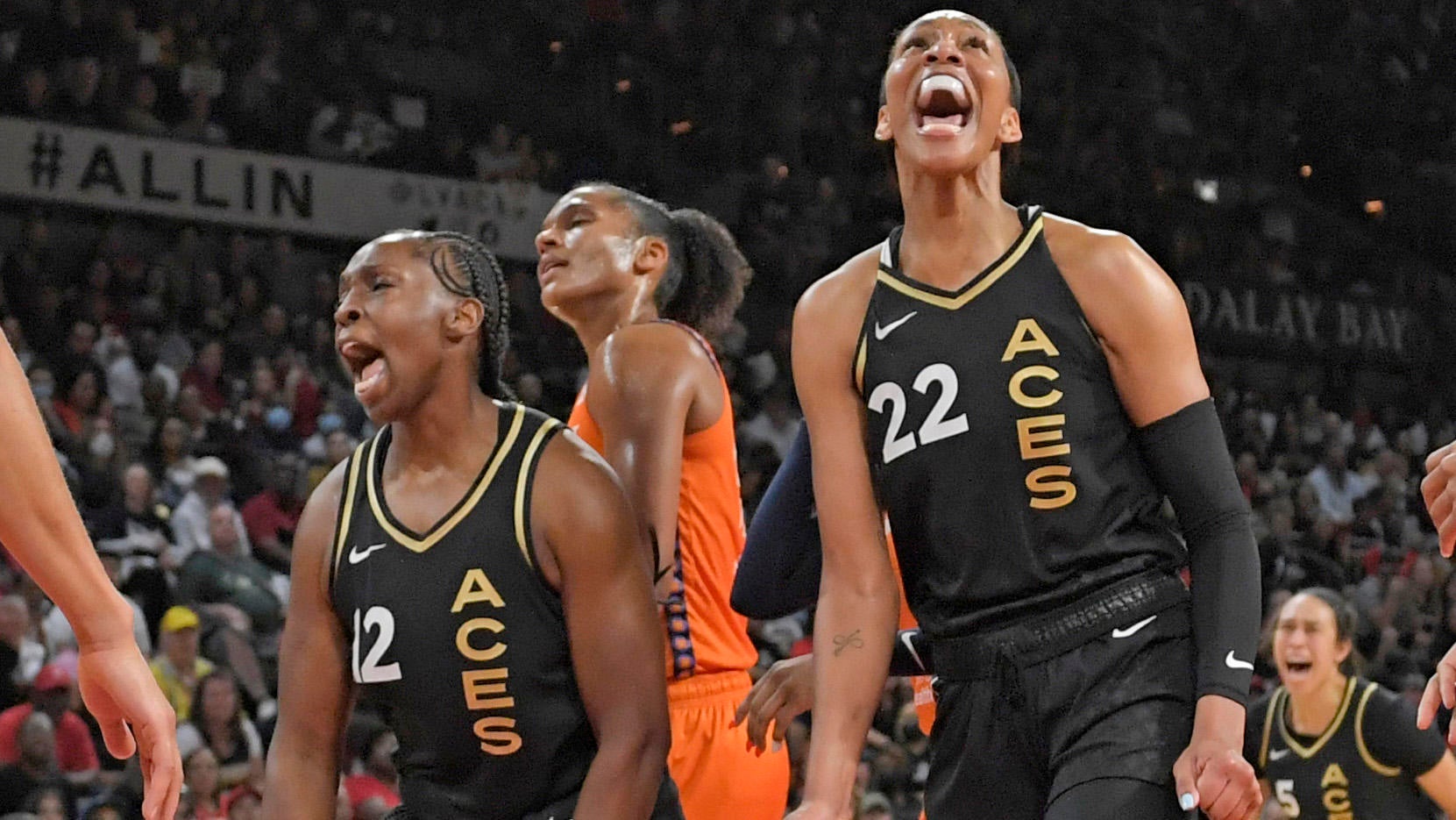 The Las Vegas Aces are one win away from the first title in franchise history. On Tuesday night, they pulled away in the second half to secure a comfortable 85-71 win over the Connecticut Sun in Game 2 of the WNBA Finals. With Las Vegas up 2-0, the series will shift to Connecticut for Game 3 on Thursday.

For the second consecutive game, the Aces jumped out to an early lead, only for the Sun to muck things up and claw their way back into the game. This time, though, the Aces had a second wind and made sure there would be no dramatic ending. They opened up a double-digit lead late in the third quarter and cruised the rest of the way.

A’ja Wilson and Chelsea Gray were at it again, combining for 47 points, 13 rebounds, and eight assists on 19 of 29 from the field to lead the way for the Aces as they’ve done all postseason. The big difference on Tuesday was that regular-season Kelsey Plum made her postseason arrival. She had more made field goals in this game than points in Game 1, finishing with 20 points and seven assists. Those three scored 20+ points and became only the second trio in WNBA history to do that in a finals game.

Jonquel Jones and Alyssa Thomas both had solid games for the Sun; Jones went for 16 points, 11 rebounds and three assists, while Thomas had 13 points, three rebounds and four assists. Courtney Williams, meanwhile, led the team in scoring with 18 points. Those three got no help, though, as they combined for 47 of the Sun’s 71 points.

When the MVP result was announced last week, A’ja Wilson became the youngest multi-time winner in WNBA history was obviously the headline. But if you looked closely at the full voting tallies, you noticed that Kelsey Plum (third) and Chelsea Gray (ninth) were also in the top 10. The Sun were the only other team to have two players finish in the top 10.

In Game 2, the Aces’ star trio showed exactly why they were so highly regarded this season. Wilson went for 26 points and 10 rebounds on 10 of 13 from the field, extending her record-setting 20-point, 10-rebound streak to five games.; Gray had 21 points and eight assists; Plum added 20 points and seven assists. Together they combined for 67 points, nearly matching the Sun’s total as a team (71).

They also made history, becoming just the second trio of players to all score 20-plus points in a Finals game. Coincidentally, the other time it happened was against the Aces in Game 2 of the 2020 Finals, when Breanna Stewart, Natasha Howard and Alysha Clark did so. The Storm went on to sweep that series, and perhaps the Aces will do the same this year.

A’ja Wilson and Chelsea Gray were awesome yet again, but the major difference for the Aces in Game 2 was Kelsey Plum. She led the team in scoring in the regular season at 20.2 points per game, while adding 5.1 assists and shooting 42 percent from 3-point land. Those marks were good for second, ninth, and fourth in the league, respectively.

Her dynamite offensive season led to a third-place MVP finish and played a major role in the Aces finishing with the best record in the league and the second-best offense in league history. She has not been able to find that level on a consistent basis in the playoffs, though, and in Game 1 finished with six points on 1 of 9 from the field — her lowest scoring game since August of last year.

In Game 2, “regular season Plum” returned, and she did so by attacking the basket over and over and over again. Courtney Williams may have had a strong offensive night, but on the other end she gave up as many points as she scored. Plum went past her at will and converted all six of her attempts in the restricted area.

While Plum still had a rough night from behind the arc (1 of 6), her ability to get into the paint gave the Aces the additional offensive boost they needed. In addition to her first 20-point game since Game 1 against the Seattle Storm in the semifinals, Plum dished out seven assists.

“I told [Plum] she needed to get her s— together,” Wilson said. “At the end of the day, that’s what she needs to do. Make sure she understood that we need her to make shots, and I know it sounds harsh, but KP is a pro and she went out there and took care of business. I think she understands that we believe in her and like I said in the last press conference, I have ways that I talk to my teammates to get them to understand where I need to be and where we need to be. Yeah, I cussed her out.”

History says the Sun are done

Game 1 of this series was played completely on the Sun’s terms, and afterward there were two ways to look at the result. Either as a positive for the Sun because despite the defeat, it showed they could impose their will, or as a huge blown opportunity to steal a winnable game on the road.

The latter turned out to be the correct viewpoint. Game 2 was played on the Aces’ terms, as their elite offense broke free and proved to be far too much for the Sun. Now, the Aces have a 2-0 lead in this short best-of-five series and are one win away from their first-ever title.

History says they will get it. Since the WNBA Finals moved from best-of-three to best-of-five in 2005, teams that have taken a 2-0 lead are 15-0. Not only has no team ever come back from a 2-0 deficit in the Finals, but no team in that situation has also even managed to force a deciding Game 5.

The Sun are 3-0 in elimination games this postseason, though, and came back from a double-digit deficit in the fourth quarter of Game 5. While the odds are stacked against them, they’ll be ready to give it their all in Game 3 and keep their season alive.