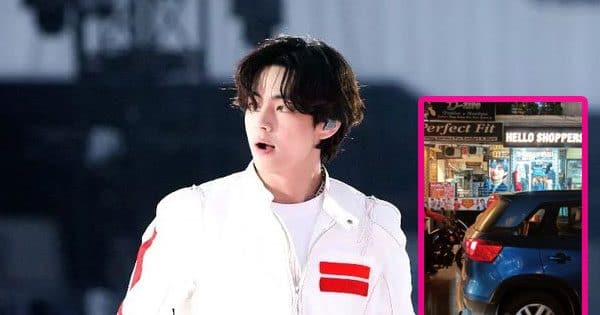 BTS is slowly becoming a rage pan-India. While the craze for K-Pop and K-Dramas apparently originated from the Northeast, the BTS wave is spreading all over the nation. Some months back, we told you how Jungkook’s pic was used to advertise an English-speaking class in Sonepat, Haryana, here is a new incident. An ARMY has shared a picture of BTS V aka Kim Taehyung’s picture being used by a business owner in Prayagraj, Uttar Pradesh. The city was formerly known as Allahabad. His picture has been used for visual purposes outside a men’s suiting shop. It makes perfect sense as BTS V is voted as the Most Handsome Man by many polls, and is a total fashion icon.

An ARMY shared this pic on her Twitter handle. Well, the BTS craze is spreading to India’s smaller towns. From locally made merchandise to BT21 characters, Indian BTS fans are enjoying the new wave. Take a look at the picture…

Guys ????? Look what I found when I went for shopping today ??? It’s the first time that I saw anything related to @BTS_twt here in my city ???? bro they’re becoming so famous everywhere here in India ??? pic.twitter.com/ovqUs1mU6F

Needless to say, desi fans of BTS reacted with a lot of joy. As we know, Indian BTS fans cannot buy merchandise via Weverse or purchase albums. They have to buy through other mediums. In fact, a special request by made by the Indian fan club for Proof album. BTS V aka Kim Taehyung is perhaps the most popular member. He is the fastest celeb to reach the landmark of 50 million followers on Instagram. BTS V is known for his drop-dead gorgeous visuals and rich baritone voice. This is how some fans reacted….

OMGG had I been there I would have stopped and screamed!!! This would have made you so happy!!
Also wait till we Indian Armys see their pics on barbar shops instead of Zayn Malik and Justin Bieber. I know that day will come soon ?
Something like this ?? pic.twitter.com/dZWEmaTYkG

Besides his discography with BTS, he has put out chartbusters like Sweet Night, Christmas Tree, Inner Child and so on. The K-Pop sensations will be heading to the military from 2023. They will resume group activities from 2025. Jin will be performing his upcoming single The Astronaut in Argentina with Coldplay’s Chris Martin.