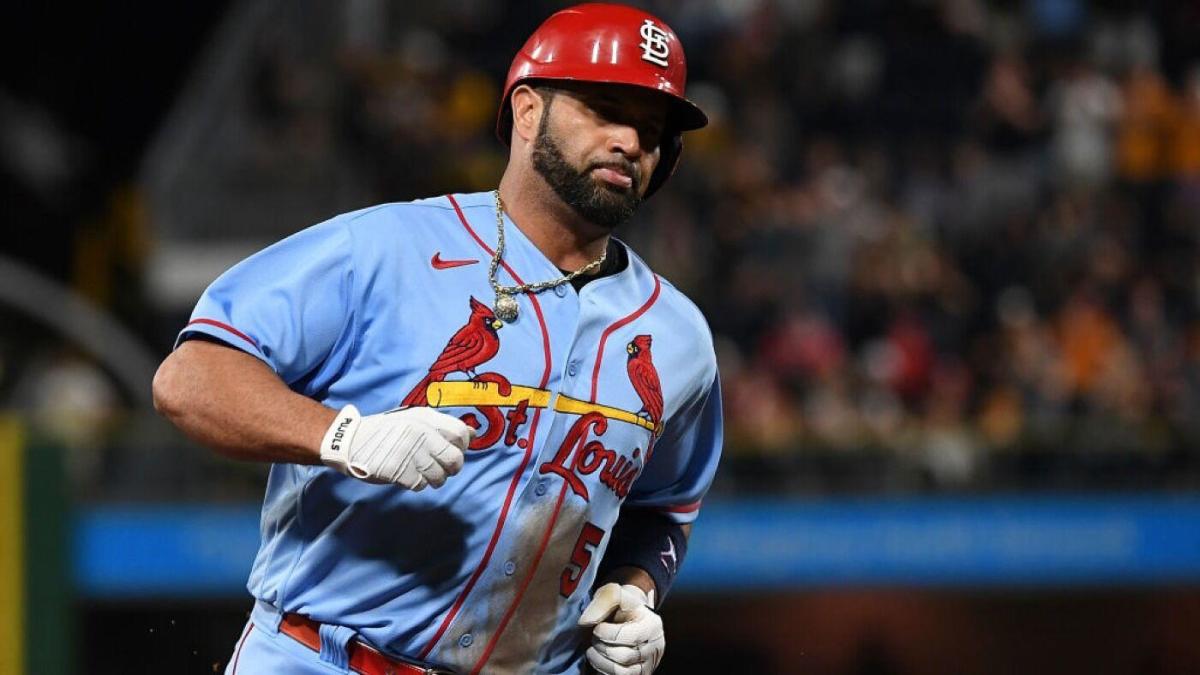 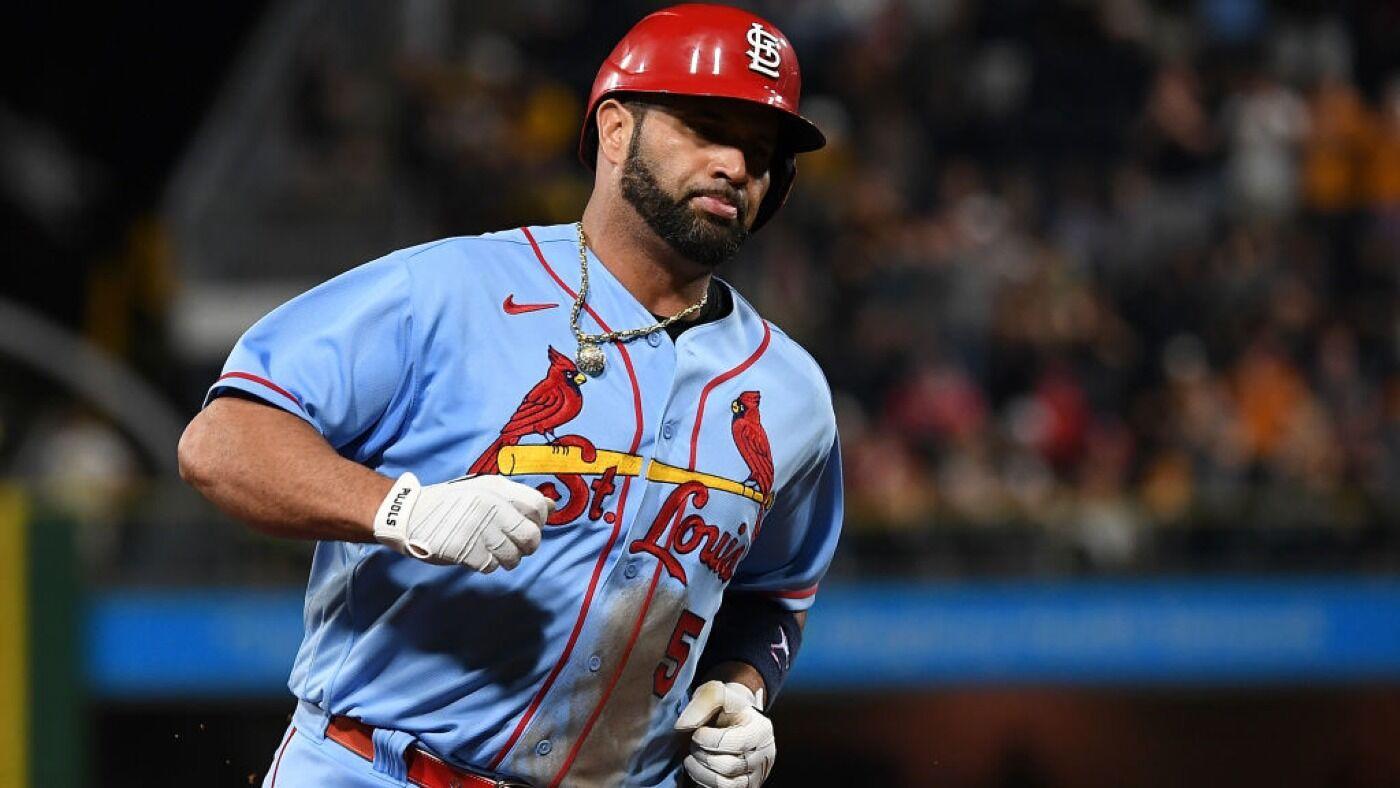 Pujols swatted his 696th career home run on Sept. 10, tying him with Alex Rodriguez for fourth most in MLB history. The 42-year-old Pujols rejoined the Cardinals this season and it’s more than a farewell tour. He’s been a very productive platoon bat, recently going deep seven times in a 10-game span to make 700 homers a real possibility. He hit No. 694 against lefty Ross Detwiler, the 450th different pitcher he took deep in his career. That topped Barry Bonds for the all-time record.

Of course, Pujols would almost certainly have already hit his 700th homer if not for the shortened pandemic season in 2020, but that was beyond his control.

So, the question on everyone’s mind is can Pujols actually reach 700 career home runs before the end of the season? Here’s what you need to know about Pujols trying to become the fourth member of the 700-homer club.

Pujols currently sits in a tie for fourth on the all-time home run leaderboard and, given his recent hot streak, he could move into sole possession of fourth place relatively soon. Only three sluggers in history have hit 700 home runs:

For what it’s worth, Pujols has averaged one homer ever 16.3 at-bats in his career, which is a top-40 mark in history but does lag behind other premium power hitters. Mark McGwire is the all-time leader with one homer every 10.61 at-bats. Giancarlo Stanton is the leader among active players with 13.82 at-bats per homer.

Keep in mind that, should Pujols pass A-Rod on the career home run leaderboard, he will take over as the all-time home run leader among infielders. Bonds, Aaron and Ruth were primarily outfielders. Pujols has spent the vast majority of his career at first base. Jim Thome is the only other primary infielder with 600 career home runs. He is eighth on the all-time list with 612.

The historical relevance of 700 homers is obvious. Only three players have ever done it, and there’s a chance we may never see another player approach the milestone in our lifetimes. Unless Miguel Cabrera finds the fountain of youth and hangs on another few years, the active player with the best chance at 700 homers is … probably Juan Soto? He joined the 100-homer club at age 23 earlier this season and has a very, very long way to go. It’s not often a player approaches 700 homers.

As some fans and certain segments of the media are wont to do, we can attach asterisks to almost anyone on the all-time home run list. Bonds was connected to performance-enhancing drugs. A-Rod admitted to using them in multiple seasons. Ruth played before integration. Aaron played when amphetamines, now a banned substance, were prevalent throughout the game. Any sort of on-field controversy involving Pujols lacks convincing evidence. You can never be 100 percent sure, but Pujols and his reputation are as squeaky clean as they come.

How often should he play?

At this point in his career, Pujols is a lefty masher and a lefty masher only. It has been years since he was a viable hitter against righties. The Cardinals are aware of this, and Pujols is seeing a higher percentage of at-bats against lefties as the season has progressed.

Pujols has hit 12 of his 16 home runs against lefties this season, including nine of his last 10.

The Cardinals have one of baseball’s best records since the trade deadline and they’ve separated themselves from the Brewers a bit in the NL Central race. The division race is not over, but St. Louis is definitely in the driver’s seat right now with an eight-game lead entering Saturday. On paper, the Cardinals have a favorable September schedule, so it’s possible they will run away with the NL Central before long.

And, if the Cardinals do begin to run away with the division, would they give Pujols more playing time against righties just to give him more at-bats and maximize his chances at 700 homers? I think it’s a real possibility. You know the fans will want to see it, and the universal DH would allow Pujols to play every single game without the wear and tear of playing the field. There’s a box office element to this too. The chase will put butts in the seats and that equals more revenue for the team.

For now, the Cardinals are committed to using Pujols as a platoon bat against lefties only, and that should continue as long as the NL Central race remains an actual race. The ultimate goal is winning the World Series — Pujols himself would tell you that — and the Cardinals should do whatever necessary to improve their World Series chances. That means sitting Pujols against righties because it gives St. Louis the best chance at a division title. If the Cardinals open up a big lead, then yes, more at-bats against righties could be in order, just to give Pujols as many bites at the apple as possible.

Back in spring training Pujols said he is planning to retire after this season, but what if he finishes the year with, say, 699 homers? Surely he would come back in 2023 to get the milestone, right? Nope. Pujols insists he is retiring after this season. He reiterated as much to USA Today:

“I’m still going to retire, no matter whether I end up hitting 693, 696, 700, whatever,” Pujols said. “I don’t get caught up in numbers. If you were going to tell me 22 years ago that I would be this close, I would have told you that you’re freakin’ crazy. My career has been amazing.”

“No, I’ve had enough,” he said. “I’m glad I made the announcement this was it when I signed. Really, I wouldn’t change a thing.”

If Pujols does finish the season with 699 homers, I’m sure failing to become the fourth player ever to hit 700 homers would be a bit of a letdown, but there’s no shame in being the fourth player ever with 699 homers. Pujols has accomplished everything a player could ever hope to accomplish in this game. Getting to 700 homers would be the cherry on top. If he gets there, great. If not, then it is still a career well worth celebrating. The chase is officially on.