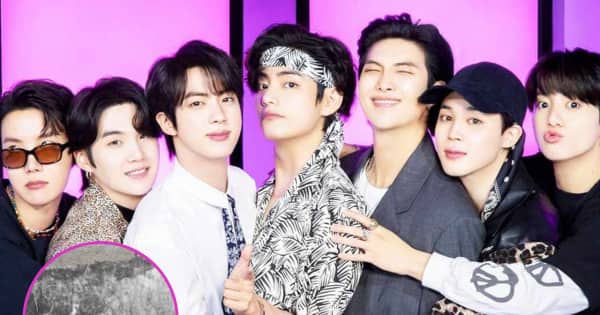 BTS is one of the most popular groups in the world. While they have been in the music industry for about a decade now, their worldwide fame spread about a couple of years ago. BTS has 7 members which are RM, Jin, Suga, J-Hope, Jimin, Taehyung and Jungkook. All of the seven members have a humungous fanbase in India. And their fan ARMY has reached far and wide across the country. One of the ARMYs has reached Golconda Fort, it seems. Yes, you read that right. Also Read – Has Pathaan impacted the release of BTS Yet To Come In Cinemas In India? Worried desi ARMY wonders what happened to February 1 screening [Read Tweets]

Hollywood News is buzzing hot with the latest updates about BTS. But this one is shocking and surprising. An ARMY had shared a picture of an optical store selling glasses. The poster above hanging has the pictures of all seven members. All of seven members – RM, Jin, Suga, J-Hope, Jimin, Taehyung and Jungkook are seen wearing shades. And replying to that, an ARMY said that she visited the Golconda Fort recently and found that someone had written on the fort’s wall – Jimin’s name and the BTS Fan chant. Check out the tweet below: Also Read – BTS: Kim Taehyung does a quick VLive; ARMY goes gaga listening to Jungkook singing in the background

I am from hyd and I went to Golconda fort recently this is what I saw on the walls. Some wrote jiminie pabo and literally a whole fan chant on the walls of the fort which is 500-year-old history. pic.twitter.com/7XBlVD38at

The ARMY also expressed how it is sad to see the ARMY ruining heritage and cultural sites such as the 500-year-old fort. Anyway, the BTS members are currently dropping their projects one by one. RM and J-Hope have dropped their albums. Suga, Jimin and Jin have dropped their solo songs. Taehyung remains to release a solo song or his album since the hiatus announcement. Meanwhile, Jin has enlisted in the military and it’s been more than a month now. The BTS members are scarcely coming online. Also Read – BTS: Jimin departs Paris after the Dior show; France airport steps up security for the VIBE singer; ARMY super impressed with security team

Talking about the military enlistment, BTS will one by one, as their schedules complete will enlist in the military. They will be done by their mandatory enlistment by 2025. The group will then reconvene and continue their musical career.