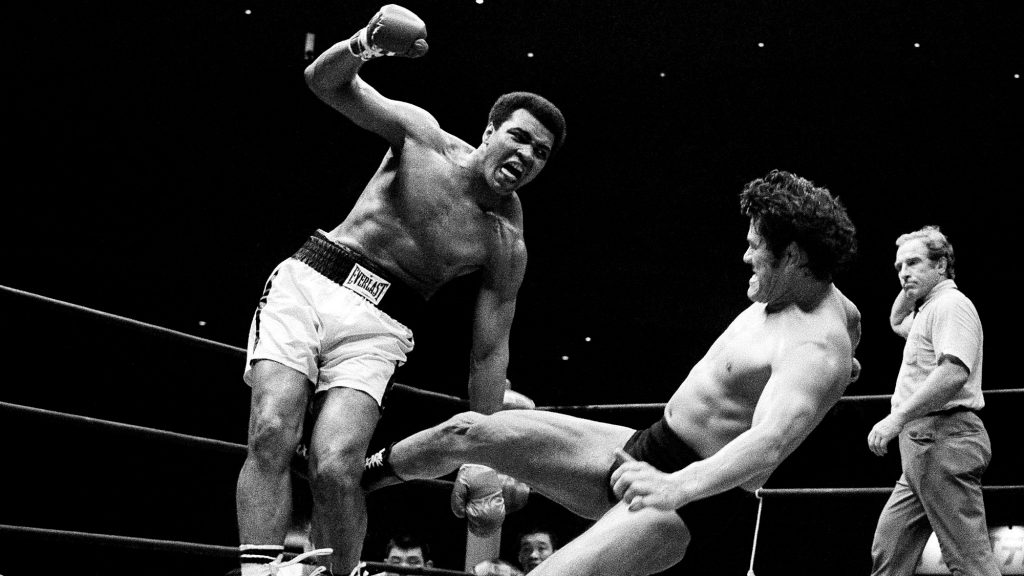 Muhammad Ali was quite possibly one of the most famous men in the world in 1976.

Arguably at the peak of his powers, in the boxing ring, he’d triumphed in the Rumble in the Jungle against Joe Frazier the year before, while in 1974, he beat George Foreman in the Thriller in Manilla.

By June 1976, Ali had defended his WBA, WBC, and The Ring heavyweight titles three times and was heading for a showdown with Ken Norton.

However, before he could get to that business, he had an itch he wanted to scratch in professional wrestling.

Inoki is one of the greatest professional wrestlers ever. He founded NJPW in 1972, which remains the leader in Japanese professional wrestling today and though he never competed in WWE, he was inducted into their Hall of Fame for his contributions to the business in 2010.

A bonafide legend in his homeland, Inoki was 33 in 1976 and like Ali, was in his prime.

After being trained by Karl Gotch, he had an MMA pedigree and he had every intention of showing Ali what he knew.

Upon his arrival in Japan, Ali was completely unaware Inoki was preparing for an actual fight. The legendary heavyweight had assumed this would be like a pro wrestling exhibition where they would choreograph some sequences and the outcome would be predetermined.

Think Rocky Balboa vs Thunderlips in Rocky III and you get the idea.

Ali’s understanding was he would ‘accidentally’ knock out the referee and while he was checking on the official, Inoki would kick him in the head and knock him out.

The referee would wake up and count him out, thus giving Inoki the hero’s win in his home country while Ali is protected in defeat, because kept his morals by checking on the ref and Inoki had to cheat to beat him – everyone wins.

But when Ali landed and asked when rehearsals were, he soon learned he was in for a real fight and Ali’s camp had to scramble to agree to the rules and regulations of the contest.

A meeting was arranged at a nearby hotel to set the rules of the fight, but they had to favour Ali. Inoki was not allowed to throw or tackle Ali and he was also not allowed to throw any kicks while standing on two feet. He either had to have one knee on the mat or be on his back. Ali’s camp also didn’t want the rules to be made public.

The fight that ended up transpiring was not what one would expect. These two men didn’t put on a show; Inoki was solely interested in beating Ali and as a result, he spent the majority of the fight on his back, a place where he could kick Ali from and eat no punches.

Ali was visibly upset with Inoki’s tactics and screamed at him to get up. Inoki continued to chop away at Ali’s legs and put him down in the fifth round. By the sixth, the boxing legend’s leg was a bloody mess.

The fight drew massive boos as it went on. To sum it up, Ali threw six punches all fight.

The end result was a draw, essentially so both men could save face. There was no tears from Inoki like when Floyd Mayweather – the best boxer of his generation – travelled to Tokyo to fight Japanese kickboxer Tenshin Nasukawa.

What Ali thought would be a jovial and lucrative affair turned into him nearly losing his leg thanks to two blood clots, according to his promoter Bob Arum.

“So fine, OK. It was terrible, it was embarrassing. But Ali is bleeding from the legs. He gets an infection in his legs; almost has to have an amputation. Not only the [Ken] Norton fight would’ve been not happening, but Ali could’ve been a cripple for the rest of his life.”

But what it did do was pave the way for crossover bouts like the one enjoyed by Mayweather, who also made a lot of money fighting Conor McGregor, who cited Inoki in the build up to the 2017 bout.

Three months after facing Inoki, Ali fought Norton and won. He’d defend his title successfully two more times before losing to Leon Spinks in 1978. However, he did avenge that loss and reclaim his belts five months later leading to his retirement.

That didn’t last long and he fought twice more before finally retiring in 1981 as the only three-time lineal heavyweight champion of the world. His career ended with loses to Larry Holmes and Trevor Berbick.

Four years later, Ali, who died in 2016, appeared at the very first WrestleMania as a referee in the main event between Hulk Hogan and Mr T. against Paul Orndorff and Roddy Piper.

Like with Ali, there was a great outpouring of grief when Inoki died on Friday night from the combat sports world given his pioneering ways also led indirectly to the birth of the UFC.

The 79-year-old lost his fight against a rare disease called amyloidosis and former UFC light-heavyweight champion Lyoto Machida, who was taught by Inoki early in his MMA career, said: “I really appreciated everything he did for the world of fighting and what he represented as a human being and fighter. Thank you my godfather and RIP.”