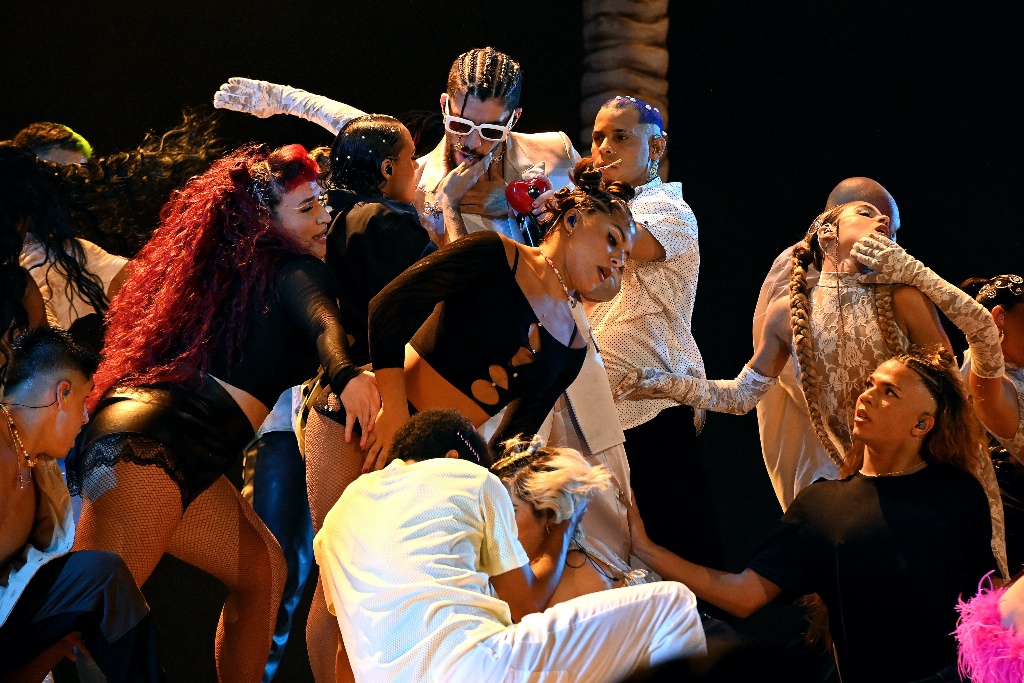 While performing his song “Titi Me Pregunto” live from Yankees Stadium for the occasion, the rapper was sharply dressed in a beige double-breasted suit and white tank top. Adding to his look’s edge was a gleaming flower brooch and white-rimmed Gucci sunglasses. However, this wasn’t the only reason his performance went viral; Bad Bunny also made simultaneous headlines for kissing one male and one female backup dancer during the event, which many are comparing to Britney Spears and Madonna’s viral kiss at the 2003 Awards.

Following his landmark kissing moment, Bad Bunny continued his evening by giving an acceptance speech entirely in Spanish for his Artist of the Year award. This was also a landmark for the VMAs, marking the first time a Latin artist has won the Artist of the Year trophy.

The 2022 MTV Video Music Awards were held on Aug. 28 at the Prudential Center in Newark, NJ, hosted by Nicki Minaj, Jack Harlow and LL Cool J. Minaj was notably recognized with the event’s Vanguard Award for her contributions to the music industry, while the Red Hot Chili Peppers were given the Global Icon Award. The 2022 Awards also included performances by Blackpink, Anitta, Panic! At the Disco, Lizzo and Maneskin. This year’s nominations are led by Harlow, Harry Styles and Doja Cat, tied with eight nominations each.

Discover more celebrity arrivals at the MTV Video Music Awards 2022 in the gallery.