Biden’s new weapon against Covid-19: Don’t call it a mandate 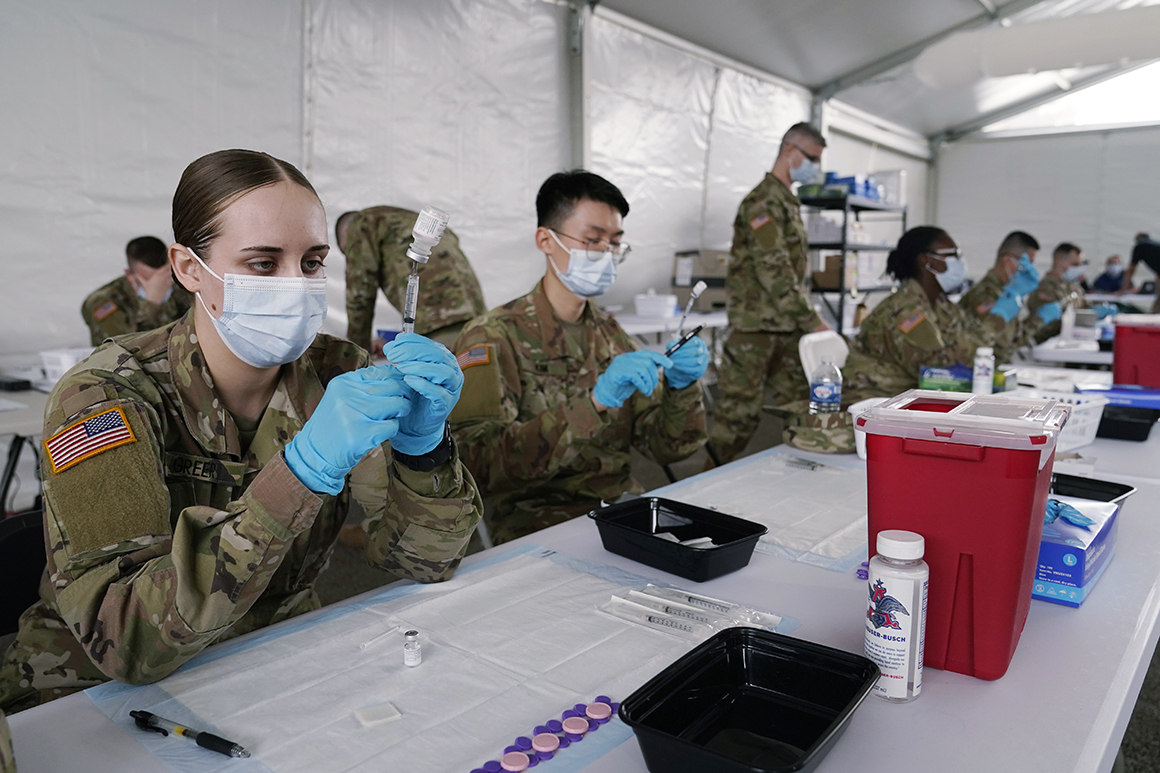 While details remain in flux, the people close to the conversations said it would serve as a powerful incentive for unvaccinated individuals to get shots, without conflicting with the administration’s earlier insistence that it would not impose a mandate.

The vaccine requirement would be the latest of several measures that top officials are pulling out, including renewed calls for masking, as the Delta variant surges while businesses and schools move toward reopening. It comes after Biden faced questions over whether he was doing enough to contain the resurgence of the virus and drive up vaccination rates after he had all but declared victory earlier this month.

The White House and several other government agencies, including the State Department, have already issued notices requiring masks indoors.

“I think we are heading in a direction where anything needs to be reconsidered,” said one Biden health official.

The details of the upcoming announcement are being closely held inside the White House. Multiple officials across various federal agencies, including at the Centers for Disease Control and Prevention and the National Institutes of Health, said they were unaware the president was planning an announcement on vaccine requirements.
A White House spokesperson declined to comment. But Principal Deputy Press Secretary Karine Jean-Pierre told reporters Wednesday that if the administration went ahead with new requirements, restrictions for unvaccinated employees could include “stringent Covid-19 protocols” like mandatory mask wearing and regular testing.

Using an honor system approach for vaccine status stops short of the top-down requirements that Republicans have railed against. But it could still be applied unevenly across agencies. For example, some departments like Health and Human Services and the Department of Homeland Security are considering more stringent requirements, at least for certain staff who interact with patients or civilians, two people with knowledge of the discussions said.

Biden would need to sign a separate waiver obligating Covid-19 shots for the military, something that two sources familiar say he is unlikely to do. That would leave vaccine guidelines for the armed services up to the Pentagon. Military leaders already require active duty troops to get a range of vaccinations, including an anthrax shot. But Biden would have to cite national security reasons to add the Covid-19 vaccines to that list.

“The Pentagon position has been that as long as CDC authorization for vaccines is ‘emergency,’ troops cannot be ordered,” a former national security official told POLITICO. “There are legal differences … troops can be ordered to take vaccines, but civil servants cannot. This is also political. Civil servants are older and overwhelmingly liberal-left of center. Troops are young and a high percent are Fox [News] watchers.”

The Defense Department will be reimposing the mask mandate in the Pentagon building, a DOD official said Wednesday night.

Civilian federal employees are already required to attest to a range of details, from their finances and potential conflicts of interest to how many hours they worked and travel expenses, depending on their position and department. They typically sign a form confirming that the information is true. Attesting to a Covid-19 vaccination would be similar, in that employees would not need to prove their status unless their agency takes the requirement a step further.

The federal move comes as some states and localities are imposing similar requirements on their workers. Both California and New York City said earlier this week that they would require government employees to be vaccinated or face repeated Covid-19 testing.

On Wednesday, Nevada announced that it would take a similar step. The Biden administration’s plan could give more states the political cover to follow suit, with advocates for tougher vaccination rules speculating it could touch off a wave of new policies.

“I think the political backlash is going to go down,” said Ezekiel Emanuel, a bioethicist who advised the Biden transition on Covid-19 and has advocated for widespread mandates. “I think it’s the kind of thing that can be repeated.”

The administration has discussed the new requirement with labor leaders, who raised concerns about a mandate being premature and who feared a backlash among their members. That persuaded Biden’s team to back off an all-employee Covid-19 vaccination policy.

But the administration is planning to couch the measures as part of broader instructions that Biden gave earlier in the year to agencies like the Office of Management and Budget to establish Covid-19 safety protocols for federal employees, officials said.

And other outside organizations have endorsed the approach. “This is not an easy decision President Biden made, but it’s the right one for our members and for the nation,” the International Federation of Professional and Technical Engineers said in a statement.

Industry sources told POLITICO that they encouraged the Biden administration during a Friday meeting at the White House to change guidance that states fully vaccinated individuals can refrain from testing programs. The administration continues to view testing as an option largely for people who will not say whether they were immunized.

“A core component of having any kind of real return to work policy the federal government is contemplating is to ensure that there is a robust testing component that applies to all employees,” one industry source said.

David Lim and Lara Seligman contributed to this report.

Tammy Abraham wins over the Roma fans by singing along to…

The FBI withheld a decryption key for weeks to run an…

Vampire Bats May Coordinate With “Friends” Over a Bite To…

Makrinitsa on Mount Pelion: The Most Beautiful Village in…