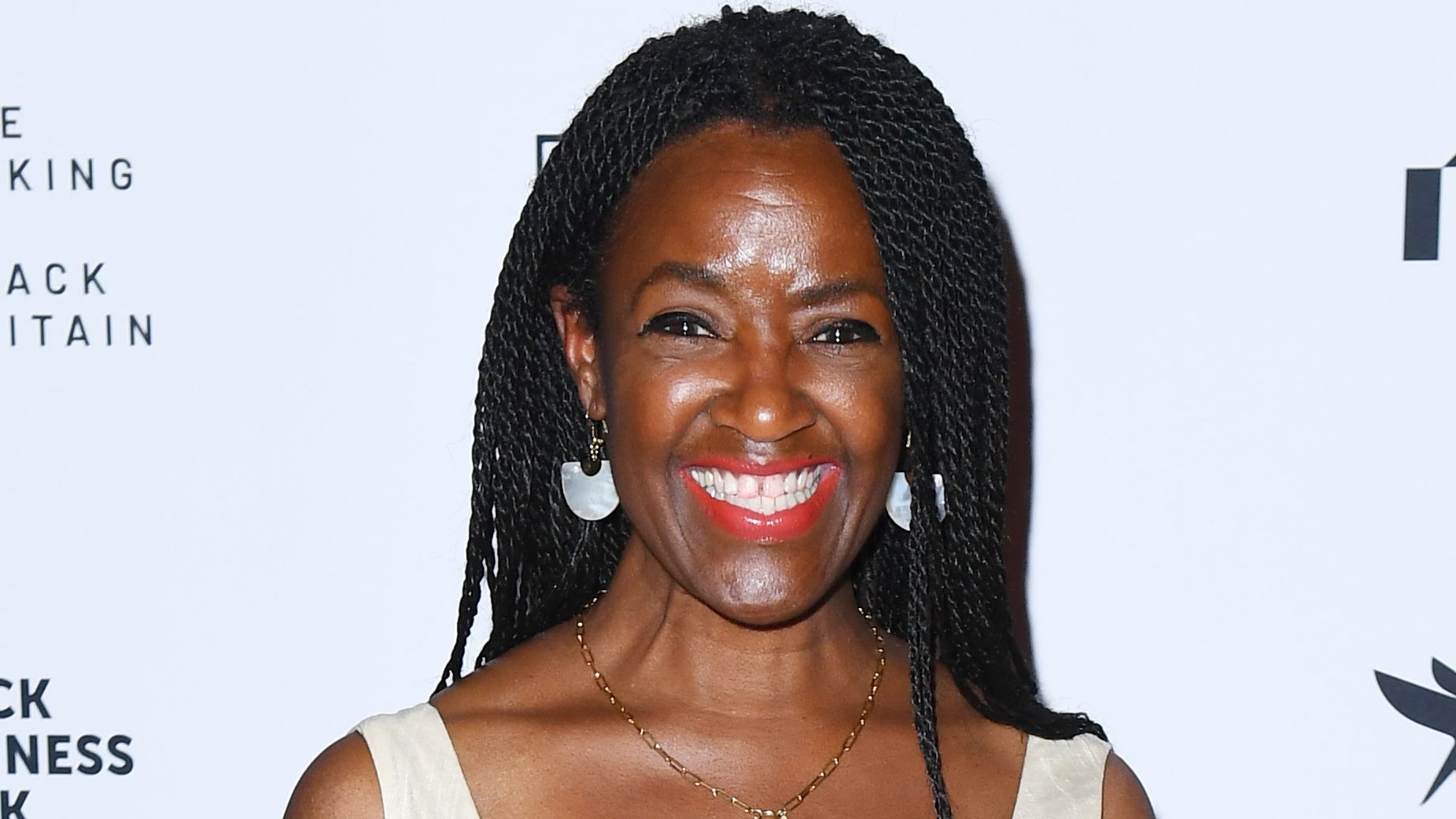 But six years before landing the high profile telly gig on talent alone, she was explicitly told by the director of Rose Bruford College that she would never make it on-screen unless “they were casting for freaks”.

In an exclusive interview Diane, who has founded the inspiring oral archive The Making of Black Britain, says: “In the third year, when we were getting prepared to leave college, the course director said to me ‘Diane, you’re actually a really natural actress, you’re great, but you’ll never get a job because you look too young for your age, you wouldn’t play any of the main leads on the stage, you’re only 5ft, so on TV you’re the wrong size for the cameraman to measure you up and also, because you’re black, unless they’re casting for freaks, you don’t stand a chance’.

“He wasn’t being mean, this was the early 80s, things were just beginning to change then. The theatre world was really diverse and exciting. I think he was thinking about mainstream work and was trying to help. At that point I thought ‘I don’t know if I really want to be an actress, but what I don’t want to happen is I’m restricted based on things I can’t change’.”

Diane, 62, only applied to the college as a dare from friends to help with her aversion to public speaking that often left her stammering and unable to put sentences together.

After graduating, the budding actress quickly proved her mentor wrong, securing a continuous stream of work and later winning rave reviews from critics for her turn as Eliza Doolittle in a stage adaptation of My Fair Lady.

“I turned out to be the only person in our year who left college with a guaranteed job and the equity card and then for seven years I was pretty much never out of work,” says Diane.

“I played in theatres the length and breadth of the country, I played the romantic lead; my height, my colour, my age, none of it was a barrier.

“Of course, when I got the Blue Peter job my co-presenters were John Leslie and Yvette Fielding. Yvette had vitiligo so was really pale, I was dark, John was 6ft something, I was 5ft nothing, in terms of a camera person trying to frame that up we’re a nightmare. But we were all right for the job so we all got the job because of who we are not what boxes we fit in.”

Upon getting the Blue Peter role, Diane was told to expect a hostile reception from some of the viewership and. for a time. she received nasty letters making it clear they were unhappy about her appointment.

Adding more pressure to the position was a significant trauma in Diane’s personal life that saw her become a mother in the most tragic of ways.

She took on the role of single guardian of her niece Justine following the sudden death of her sister Jay from a virus.

While others might have been overwhelmed by grief and stress, Diane managed to make her new role not only work but flourish.

She says: “I was definitely told it was a big thing for me to become the first black presenter. ‘There’ll be media interest and there may be members of the public that aren’t happy about this’. At that time Blue Peter was a bit of an institution. It was the nation’s favourite children’s programme. There was a lot that rested on that decision.

“For any Blue Peter presenter you’re more than a presenter, you’re an ambassador really, and so to be the first black presenter I definitely knew getting that job was much more than representing myself. I
knew the spotlight was on me and if I got it wrong that might reflect in a negative way on others like me.

“When I started the job I was told to prepare for a few dissenting voices, and as expected there were letters that very vocally expressed how much they disliked someone like me, but within not too long a period of time the viewers got to know me, and when you get to
know somebody the fear about who you assumed them to be, on the whole, tends to dissipate.”

By the time her tenure on the show came to the end in 1996, those complaints had all but disappeared.

She recalls: “There were sack loads of letters they had from fans saying how upset [they were] that I was leaving, children were now distraught I was leaving, I was their favourite presenter… It was so warm and lovely…

“I went from being potentially something that could bring the programme into some awful disrepute to being one of the presenters that is very warmly received.”

Diane, who presents the BBC’s Songs of Praise, has always been guided by her morals, turning down lucrative offers to host programmes such as The National Lottery to stay true to her beliefs.

The National Lottery Draw was a ratings juggernaut in the 90s and early 00s, with millions tuning in to see if they had the winning ticket.

Some of the biggest names on TV have hosted the programme, from Anthea Turner and Bob Monkhouse to Noel Edmonds and Dale Winton.

Diane says: “That particular situation with The Lottery, I did struggle because the profile was great, the money was fantastic, easy job, there was so much I could have said yes about, but it just so happened I had a real, stark reality check about a week before when I was up in the north East and really saw first hand a whole community utterly devastated through poverty.

“A lot of us don’t realise in this western country, one of the richest countries in the world, the level of poverty we live amongst. I actually saw people choosing to buy a Lottery card rather than buying food for the kids in the hope that they could change their lives because that was the only hope for them, and I just knew that I couldn’t in all good conscience be on a show… I don’t mind if people do the Lottery. I know that people trust me and I just felt that I would have betrayed that trust.”

Her latest endeavour is very much a passion project with a purpose.

The Making of Black Britain began as a way for Diane to document her own family history, from her childhood as the daughter of Jamaican migrants living in Hatfield, London, in the 1960s, through her experience as one of the few black pupils at school, and her later career as a successful TV star and philanthropist.

But it soon became apparent that the storytelling platform had a wider appeal and was an effective way of exploring what it means to be Black British.

MOBB now uses the 1948 Nationality Act that kick-started mass migration from the Caribbean to the United Kingdom as its anchor point.

The oral archive features stories from people of all ethnicities and has even made waves in the corporate world, partnering with major retailer Tesco.

Diane, who recently introduced the project to a younger audience for the first time during a talk at Coleridge Community College, says: “At the moment I’m living and breathing The Making of Black Britain. This coming July is the 75th anniversary of the ‘48 Nationality Act which is the act that triggered mass migration from Commonwealth countries into the UK.

“We are working quite intensely at the moment to get a huge number of stories ready that will mark that piece of history. Definitely between now and then I will be consumed with it.

“This idea I had for an archive to mark my own history has so touched a nerve with the British public and organisations, not just businesses like Tesco, but some of our national charities and the community at large. I think I’ll be consumed with it for a little longer. My dream is to set up an archive that can outlive all of us because we all represent a living history.”

While some of the stories told contain harrowing details, Diane describes the project as a “beautiful experience” that leaves listeners feeling closer.

“We’re in a very interesting period of history whereby in the last couple of years, as somebody of colour, there’s never been a time where there’s been such an interest in hearing voices like mine,” she says. “You’ll see in the rise of publications, TV programmes; across the board, there’s definitely a space for these voices to be heard, but equally, and here’s the paradox, I’ve never lived in a time where so many of us are afraid to speak for fear of being cancelled.

“I think the reason an organisation like Tesco, and even the general public, has had such a positive response to MOBB is because we sit somewhere in the middle. We’re not projecting our views on anybody, we’re creating a space where we can get to know people. They can tell their life experiences.

“What we’re finding is the day to day real life stories challenge the headlines we read sometimes and challenge stereotypes all of us have about ourselves and each other.”