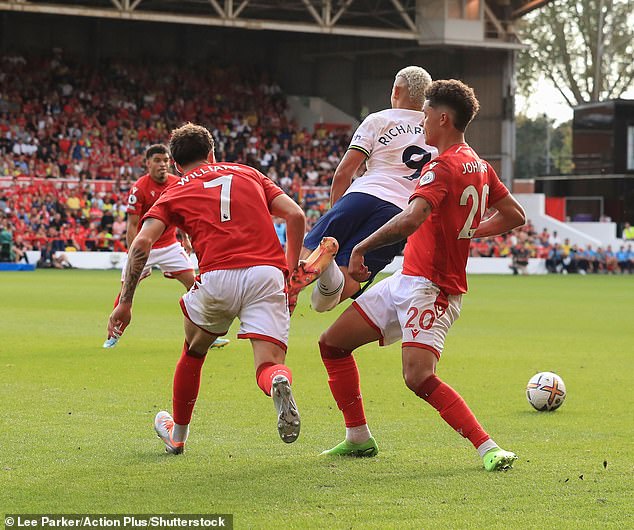 ‘No one comes to the City Ground and takes the p***!’: Brennan Johnson’s footballer dad David backs son for CLATTERING Richarlison after showboating – while Jamie Carragher doubles down on criticism after admitting ‘he winds me up’

By Sam Brookes For Mailonline

Brennan Johnson’s dad David has appeared to back his son for making a heavy challenge on Richarlison during Nottingham Forest’s match against Tottenham after the Brazilian striker started doing keepy-ups in the closing stages of the game.

Tottenham moved into a 2-0 lead thanks to goals in either half from Harry Kane, and with the clock ticking down, the points appeared to be in the bag for the visitors. Richarlison certainly thought so as he began to showboat deep in Forest’s half.

However, after attempting several keepy-ups he then gave the ball away, and when it quickly rebounded to Richarlison, Johnson seized his moment and clattered into the Spurs forward. Johnson was shown a yellow card, but it seems his father, who played for Forest between 2001 and 2006, had no issues with the tackle. 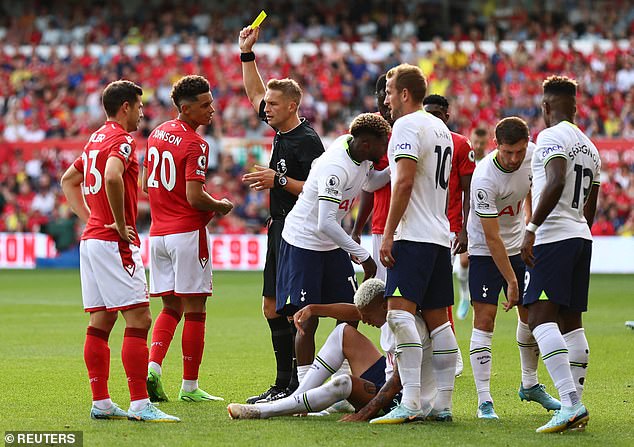 Johnson received a yellow card, while Richarlison was helped to his feet by his team-mates

‘No one comes to the City Ground and takes the p***,’ the elder Johnson wrote on Twitter after the final whistle.

Richarlison’s actions have caused controversy, with Jamie Carragher admitting on commentary on Sunday that the 25-year-old ‘winds me up’.

Carragher has been critical of Richarlison in the past as he hit out at his theatrics during his time at Everton.

Some Everton fans have defended Richarlison following his showboating, including the host of YouTube channel ToffeeTV.

Carragher was having none of it, though, and still feels that Richarlison was wrong to do keepy-ups.

Jamie Carragher has hit out at those defending Richarlison, claiming they would not be happy if he started showboating against their team

‘Your channel can get to f*** asking me to come on! It’s not skill keeping a ball up with no one near you, it’s taking the p***. If an opposition player did it at Goodison you’d all be screaming for someone to put him in the stand,’ he tweeted at the ToffeeTV host.

The former Liverpool defender then sent a further tweet on Monday afternoon, insisting that Richarlison was ‘daft’ for trying a fancy trick as he risked picking up a serious injury from the subsequent tackle.

‘It doesn’t matter what we all think of the #Richarlison showboating, it’s what the opposition think. They thought it was taking the p**s and tried to take him out. You can’t condone that but the worst that happens is a red card, for Spurs it’s a bad injury. That’s why it’s daft,’ he wrote.

Forest boss Steve Cooper was also critical of Richarlison’s conduct in his post-match press conference, claiming that he would not have been happy to see one of his own players showboating on the pitch.

‘I would not want my players to do that; to do what Richarlison did.

‘But if that is acceptable at Spurs, it is nothing to do with me. But it would not be accepted here, that is for sure,’ he said.