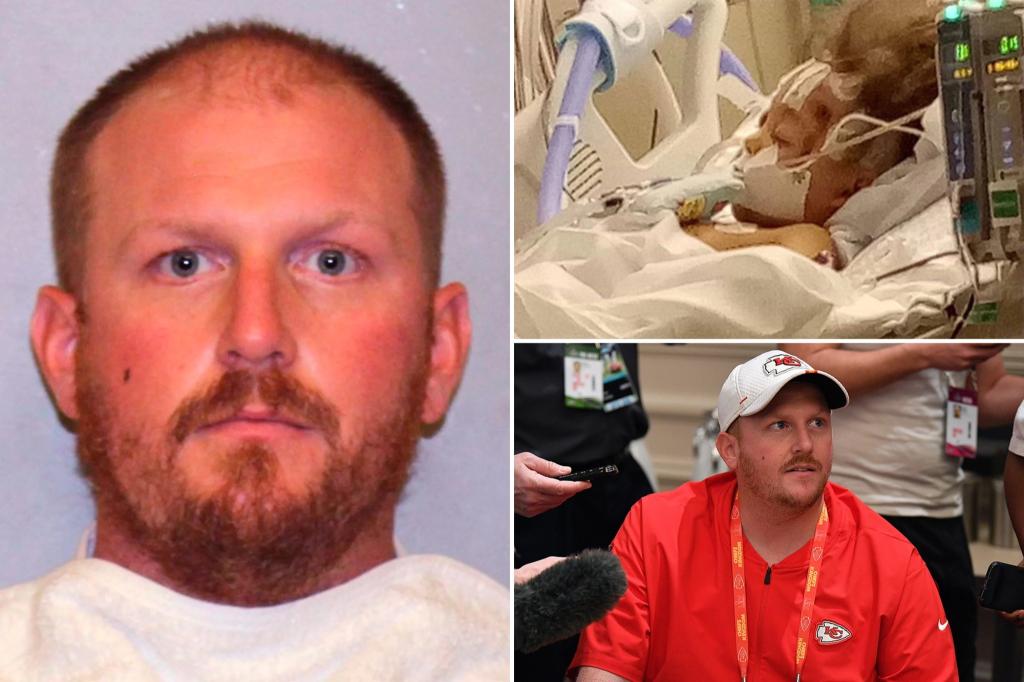 In a court transcript obtained by Yahoo Sports, Reid — the son of Chiefs coach Andy Reid — admitted for the first time his whereabouts before the crash that injured multiple people.

During a court hearing in Jackson County Circuit Court in Kansas City last month, Reid, 37, pleaded guilty to felony DWI, and stood under oath to answer questions from his attorney J.R. Hobbs.

“On February 4th, 2021, were you present at Arrowhead Stadium?” Hobbs asked.

“Was there a point in time when you began driving home around 9 p.m.?” Hobbs asked.

Until the release of the transcript, it was only known that the accident took place near Arrowhead Stadium, which is adjacent to the team facility.

A separate portion stated that Reid “acknowledges operating a vehicle while under the influence of alcohol as he attempted … to return home from his workplace.”

The crash scene was around a half mile from the team’s offices and, as noted by Yahoo Sports, a route Reid would logically take to get to his home in Overland Park, Kansas. There reportedly are no bars or restaurants on the way. At the time, Reid was unable to attend such establishments due to the NFL’s 20202 COVID-19 protocols.

Tom Porto, an attorney representing the Young family, said last month that they are “outraged” over the plea deal. The Young family is expected to appeal to the judge for a longer sentence.

“The five victims of this crime are outraged the prosecuting attorney is not seeking maximum sentence allowable by law,” Porto said. “The defendant is a prior offender whose actions caused a 5-year-old girl to be in a coma and seriously injured three others.”

The accident — which happened three days before the Chiefs lost to the Buccaneers in the Super Bowl — left 5-year-old Young with a traumatic brain injury and caused non-life-threatening injuries to a 4-year-old.

Court documents say Reid measured a 0.113 blood alcohol level and was driving 84 miles per hour 1.9 seconds before the crash.

In November 2021, Young’s family announced they had reached a care plan for her. The Chiefs agreed to a deal to provide medical care and “long-term financial stability,” according to Porto.

Reid was hospitalized from the crash and immediately suspended by the Chiefs. After he missed the Super Bowl, his contract was not renewed.

Neither the Chiefs nor the NFL have shared any information regarding their investigations into the crash.

Reid reportedly had been in and out of treatment for years. In 2007, he was sentenced to 23 months in prison for a road rage incident in Philadelphia, where his father coached the Eagles. He was paroled into a treatment center.

Reid also reportedly entered a separate guilty plea on DUI and drug charges stemming from him driving his car into a shopping cart in Pennsylvania.