BTS’ Jin to become an uncle, Cardi B shows off baby bump in teeny-tiny golden bikini and more 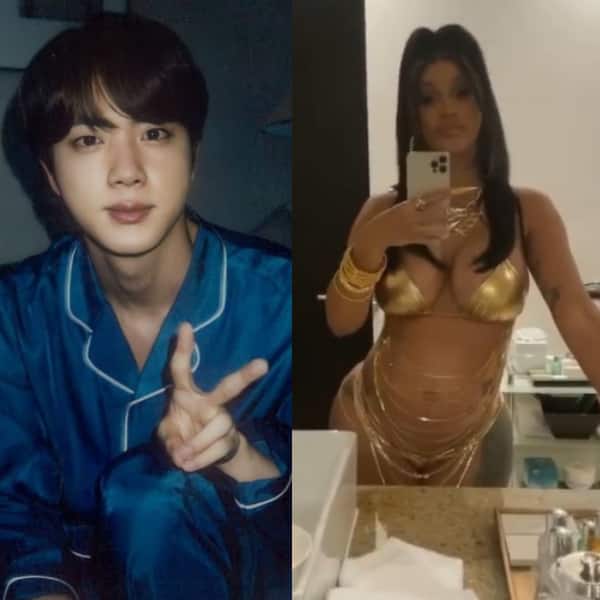 It’s time for your daily dose of Hollywood stories. As the day comes to an end, here are all the trending stars and stories that ruled the headlines. From K-pop band member Jin to pregnant Cardi B, a lot of stars kept buzzing in the news circuit. Without any further delay, here’s all the dope from Hollywood. Also Read – Mira Kapoor’s reaction to Regé-Jean Page’s exit from Netflix web series Bridgerton is basically all of us

Cardi’s B baby bump show off in bikini

Preggers Cardi B shared a video on Instagram flaunting her baby bump. We see her dressed in a teeny-tiny golden bikini set with chains around. Golden bangles and hoop earrings, Cardi B looks SEXY AF!

While Jennifer Lopez and Ben Affleck are painting the Hollywood red with their love, the lady has taken their romance to another level by sporting a necklace with his initials. While on a holiday in Monaco , she was seen dressed in a white dress and wore a delicate necklace that had alphabets B, E and N as pendents.

Meanwhile, Jennifer Lopez’s ex Alex Rodriguez was spotted enjoying a jet ski ride with NFL presenter Melanie Collins. As reported by dailymail.co.uk, they rode nearby Jennifer’s $130M yacht where she had spent some quality time with Ben a few days ago.

On Dax Shepard and Monica Padman’s Armchair Expert podcast, Mila Kunis and Ashton Kutcher admitted that they do not bathe their kids regularly. Mila was quoted saying, “But when I had children, I also didn’t wash them every day. I wasn’t that parent that bathed my newborns — ever” while Ashton said, “Now, here’s the thing: If you can see the dirt on them, clean them. Otherwise, there’s no point.”

Half of Hospitalized COVID-19 Patients Develop a Complication

At least 1 dead, 12 injured after ‘horrific’ shooting at Tennessee grocery…

Afghanistan’s Health System Is on the ‘Brink of Collapse,’…

Drake Hits the Links With a Pretty Sweet Golf Collection