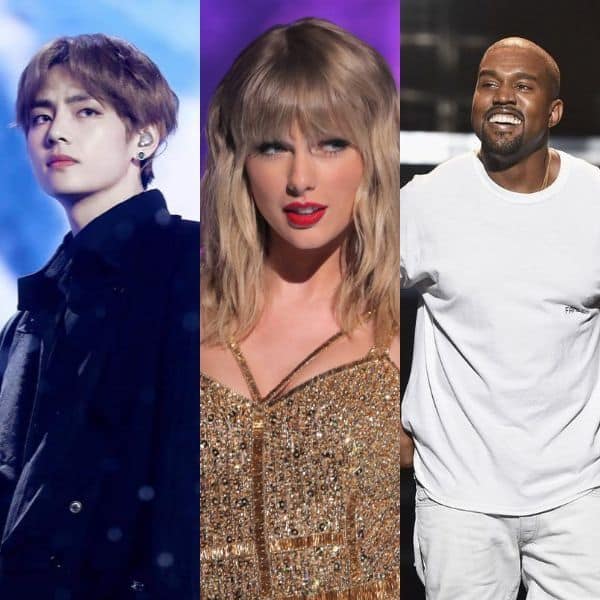 It’s that time of the day when we present to you our trending Hollywood news today. Taehyung, Taylor Swift, Kanye West, Robert Pattinson and others are a part of our top Hollywood news today. So read on to know more about today’s Hollywood newsmakers. Also Read – BTS: South Korean legislature divided over the band’s military service exemption – deets inside

BTS member Taehyung to lend voice for BFF Choi Woo Shik
According to reports, BTS’ Kim Taehyung may lend his voice for BFF Choi Woo-Shik’s new K-drama Our Beloved Summer. The series is based on a Naver webtoon and also also stars Kim Da-Mi, Kim Sung-Cheol and Roh Jeong-eui. Also Read – BTS: When Japanese singer Yuiko told RM, ‘Thank you for kissing me’ on stage and the leader was left blushing — read deets

Read the full story here: BTS member Taehyung to lend voice for BFF Choi Woo Shik Also Read – BTS: Did you know Jungkook and V were nervous to give their AMAs speeches? Here’s how RM turned a saviour for them

Taylor Swift and Kanye West’s last-minute additions for Grammy Awards
The Recording Academy decided to expand the number of Grammy nominees just 24 hours before the list was announced on Tuesday — to the benefit of artistes including Kanye West, Taylor Swift, ABBA and Lil Nas X, according to a report in the New York Times. The move, which saw the list of nominees in the top four general categories grow from eight nominees to 10, was positioned as a natural progression by CEO Harvey Mason jr. when asked about it by Variety on Monday. “We saw it as an incredible opportunity for us to honour more artistes and shine a light on more great music, and potentially offer a greater opportunity for more genres of music to be honoured,” he said, reports variety.com.

Rapper Kanye West has said that he “made mistakes” in his marriage to reality TV star Kim Kardashian and declared “I need to be back home”. He made the confession during an emotional speech at Los Angeles Mission’s Annual Thanksgiving event in Los Angeles this week, reports femalefirst.co.uk.

Actress Zoe Kravitz, who is playing Catwoman alongside the former ‘Twilight’ star Robert Pattinson, who takes on the title role in ‘The Batman’ and has assured fans that his transformation is something to be amazed by. She said: “Rob is perfect for this role. He was incredible. His transformation was out of this world. (Director) Matt Reeves has a lot of heart, and he cares so much for these characters. I’m just very excited for him to be able to go on vacation because he deserves it.”

Andrew Garfield is done with questions about Spider-Man: No Way Home

There have been non-stop speculations about what the new narrative ‘Spider-Man: No Way Home’ will be and whether or not Tobey Maguire and Andrew Garfield’s versions of the iconic character will be present. Tom Holland’s Spider-Man will have many enemies to face, and many believe that he will have some help from some very familiar faces as villains such as Doctor Octopus, Green Goblin and what appears to be a new and updated version of Electro are confirmed to return.

(With inputs from IANS)

Euro exposed as ‘stepping stone to single state’ after Christine…

U.S. Threat to Squeeze Russia’s Economy Is a Tactic With a Mixed Record

Pfizer Says Its Booster Is Effective Against Omicron

New Research Reveals How the Body Uses Fat To Fight…