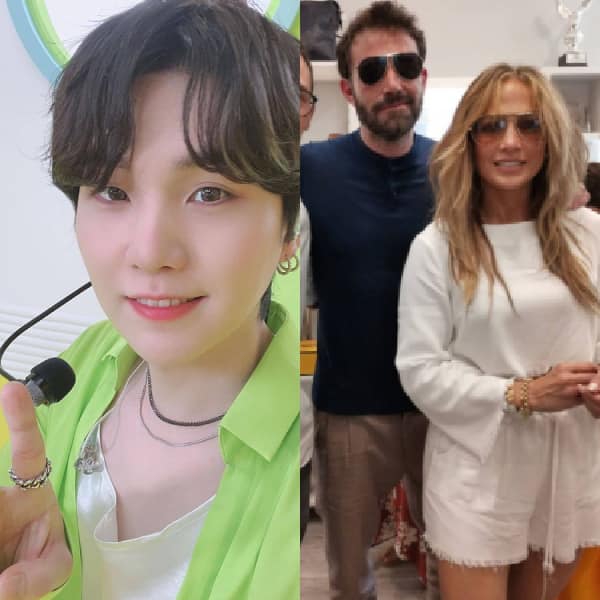 We won’t let your day end without your daily scoop of all the trending Hollywood news. Among the newsmakers of the day, BTS’ Suga made the maximum noise as he slammed the ‘pushy’ labels who treat artists as their property. Further, Jennifer Lopez’s pictures waving goodbye to the yacht crew went viral, with fans guessing that her trip with Ben Affleck has come to an end. Read more here. Also Read – Hollywood Weekly News Rewind: BTS’ Jin to become an uncle, Jennifer Lopez – Ben Affleck’s whirlwind romance, Dwayne Johnson to not be a part of Fast & Furious and more

In an interview, BTS’ Suga expressed his gratitude to label HYBE for always being considerate towards the artists. He then spoke about how there are some labels who consider artists as their property and in turn destroy the industry. He was quoted saying, “I do not I think the label ought to actively accommodate the artist’s views about what they can and cannot do. An attitude that’s just like, Oh, we made you kids, and as long as you just do what we tell you to it’ll all work out, so just do it—I think that really doesn’t make any sense. Of course, there could still be situations where the label has to be pushy like that, obviously. But I heard there have been times where a label will just say, Do it, without any explanation to the artist, or, Why are you talking so much? I think that’s the biggest issue and it’s destroying the industry. If you just see the artist as a product, how can they do anything creative? I really think it’s very contradictory to ask the people on stage to put on an enjoyable performance when they’re experiencing neither fun nor enjoyment.” Also Read – Jennifer Lopez and Ben Affleck’s latest cuddling, giggling and kissing pictures prove they are truly-madly-deeply in love with each other

In some of the viral pictures, one can see Jennifer Lopez waving goodbye to the yacht crew. With this, it is being reported that Jennifer Lopez’s birthday trip with Ben Affleck has come to an end.

As per a report in HollywoodLife, a source has revealed that Kim Kardashian wants to have more of communication and family unity despite filing for a divorce from Kanye West. Stating that the duo has made a pact to support each other no matter what, a source said, “Kim wants more communication and family unity and plans with Kanye. She wishes it wasn’t like this and it was more often. It’s her hope that he’ll support her when the time comes for her to promote or do something big, but she’s unsure if he will. She knows he’s a bit unpredictable like that and that devastates her but she does the best she can for the sake of the children. She absolutely will continue to show up for him though.”

A few pictures of the Sex and the City star Sarah Jessica Parker enjoying her time at the beach have gone viral on the social media. The pictures have her dressed in a black swimsuit. Fans are ogling over how stunning she looks even at 56.

Dwayne Johnson thanks fans for making his Jungle Cruise number 1

Taking to social media, Dwayne Johnson aka The Rock thanked fans for showering his latest release Jungle Cruise with immense love. He wrote, “Thank you again, for making JUNGLE CRUISE the #1 MOVIE IN THE WORLD delivering a phenomenal 93% Audience Score ~ the highest audience score of Emily’s and my career.”

Here's what comes next for the $1 trillion bipartisan infrastructure bill

Madonna reveals she has been ‘checking in’ on Britney Spears amid…

At just $15, this lighter red wine from Greece makes for fine sipping

Biden Asks Those Not Yet Eligible for Boosters to Be Patient

Simple Blood Test Is All It Takes During Prostate Cancer…

No charges for driver who killed Jets’ Greg Knapp in…