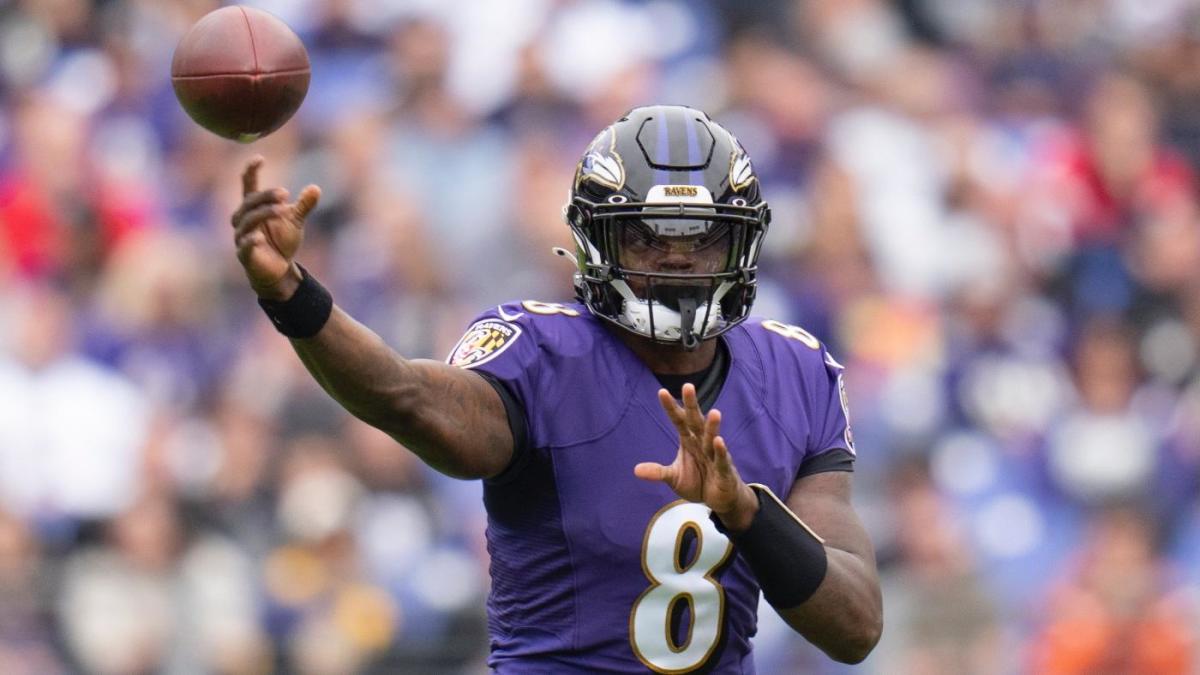 The Tampa Bay Buccaneers are coming off a pair of embarrassing losses to the Pittsburgh Steelers and division rival Carolina Panthers, but they have an opportunity to get back on track on Thursday night as they host the Baltimore Ravens on Thursday Night Football. Baltimore has alternated wins and losses in every week this season and has seen its offense slow down of late.

Both teams are dealing with injury issues at the moment, and they’ll keep some important players off the field. We’ll still have plenty of star power, though, with Tom Brady and Lamar Jackson going to battle against defenses that have shown themselves capable of playing at a high level, though not with the desired degree of consistency.

Which of these two teams will capture the victory? We’ll find out soon enough. Before we break down the matchup, here’s how you can watch the game.

When the Ravens have the ball

Lamar Jackson started the season on fire, completing 56 of 88 passes (63.6%) for 749 yards (8.5 per attempt), 10 touchdowns, and two interceptions, while also rushing 26 times for 243 yards and two additional scores, across the Ravens’ first three games. He’s since cooled down considerably (65 of 109 for 648 yards, three touchdowns, four picks, 40 carries for 267 scoreless yards over the last four games) as teams have started playing more man coverage (to dare an underwhelming receiving corps to beat them on the perimeter) and getting more pressure (which limits his scrambling ability, to a degree).

The good news is the Ravens might get Rashod Bateman back after he put in a full practice on Wednesday and was listed as questionable. The bad news is they might not have Mark Andrews, who didn’t practice at all this week after being limited last week and going catch-less against the Browns on Sunday. If Andrews sits, we’ll be robbed of what would have been the most fascinating matchup in this game, with one of the NFL’s best tight ends going up against one of the best coverage linebackers in the league in Lavonte David (and one of the most aggressive, forward-moving linebackers in Devin White).

The Buccaneers are also dealing with a rash of injury issues in the secondary as cornerbacks Carlton Davis and Sean Murphy-Bunting, along with safety Antoine Winfield Jr., are all out. That’s in addition to Logan Ryan going on injured reserve.  The Bucs are possibly going to be rolling out Jamel Dean, Dee Delaney, and fifth-round rookie Zyon McCollum as their top three corners, with Keanu Neal (who failed at linebacker in Dallas last season because he couldn’t even cover from that spot) alongside Mike Edwards at safety. So if there were ever an opportunity for the Ravens to get their pass-catchers going on the outside, this might be it.

Tampa also surprisingly got torn up in the run game by the Panthers last week, with D’Onta Foreman and Chuba Hubbard gashing them for 181 yards and a touchdown on 24 carries. If Akiem Hicks (questionable) sits out again, it could be vulnerable up the middle. The return of Gus Edwards last week was especially welcome for the Ravens after J.K. Dobbins went on injured reserve, and Edwards immediately looked like Baltimore’s best runner. He’ll likely still rotate with Kenyan Drake and Justice Hill, but Edwards should see the bulk of the carries and be the guy who gets the looks in the red zone. He’s big and powerful, and his downhill style has always meshed well with the threat of Jackson taking off around the edge.

When the Buccaneers have the ball

Tampa’s offense is arguably the most disappointing unit in all of football.

After checking in seventh and second in yards and third and second in points during Tom Brady’s first two seasons, the Bucs are down to 22nd in yards per game and 24th in points per game this season. The underlying metrics are not encouraging. Tampa ranks 25th in yards per play, 27th in points per drive, and 22nd in the share of drives that end in a touchdown or field goal; and all of this is despite the league’s second-lowest turnover rate so far. They just… keep punting. They’ve punted on 44.2% of their drives, the sixth-worst mark in the NFL, according to Tru Media.

It all starts with the downfall of what was once arguably the league’s best offensive line. Alex Cappa left in free agency. Ali Marpet retired. Ryan Jensen suffered a knee injury during preseason, and Aaron Stinnie tore his ACL. Both Donovan Smith and Tristan Wirfs have dealt with injury issues this year, while rookie Luke Goedeke has been overmatched and overwhelmed just about every week.

Tom Brady clearly does not trust his protection, and has been antsy in the pocket all year. He’s always been among the league’s quickest passers at getting rid of the ball, but he’s taken it to a new level entirely this season, releasing the ball more than a tenth of a second faster than any other quarterback. The issue with that is, while he used to be able to throw quickly and push the ball downfield, he’s now routinely throwing well short of the sticks. And while his pressure rate is down due to how quickly he’s getting the ball out of his hands, he’s getting sacked far more often when pressure does hit home.

The book on Brady for years has been that you can’t blitz him, because he’s seen everything and he’ll just dice you up. But blitzes are giving him issues this year, as he ranks just 28th out of 35 qualifying quarterbacks in EPA per dropback when opponents send at least one extra rusher, compared with ninth when they don’t. Some of that surely has to do with the shuffling at wide receiver, but again, he just seems wildly uncomfortable with everything that’s going on around him in the pocket.

Lucky for the Bucs, the Ravens don’t blitz as much this season as they used to under former defensive coordinator Wink Martindale. They’ve blitzed at an almost exactly average rate so far this year (26.3% of opponent dropbacks vs. a league average of 26.1%), but they’ve gotten a sack almost twice as often as the average team when they’ve sent pressure. They’ve been susceptible at times to scrambles, but, well, Brady can’t really scramble.

All of this would be less problematic if the Bucs could run the ball, but unfortunately, the run game is in even worse shape. Tampa has the NFL’s worst run-blocking grade at Pro Football Focus, ranks 28th in Adjusted Line Yards at Football Outsiders, and sits 29th in yards before contact per carry despite facing heavy boxes less often than the average offense. Leonard Fournette looks like he’s running in mud; he ranks 61st out of 69 players with at least 25 carries in yards after contact per tote, 53rd in the share of his runs stopped at or behind the line of scrimmage, 58th in third- or fourth-and-1 conversion rate, and 51st in explosive run rate. Byron Leftwich vowed weeks ago to get rookie Rachaad White more involved in the offense, and White has certainly appeared to have more juice than Fournette, but his ranks in these metrics aren’t much better.

So, what do the Bucs have going for them in this matchup? Well, Baltimore is dealing with injury issues in the secondary. And coming into the season we never would have thought the Tampa passing game would be this bad, so maybe it gets back on track.