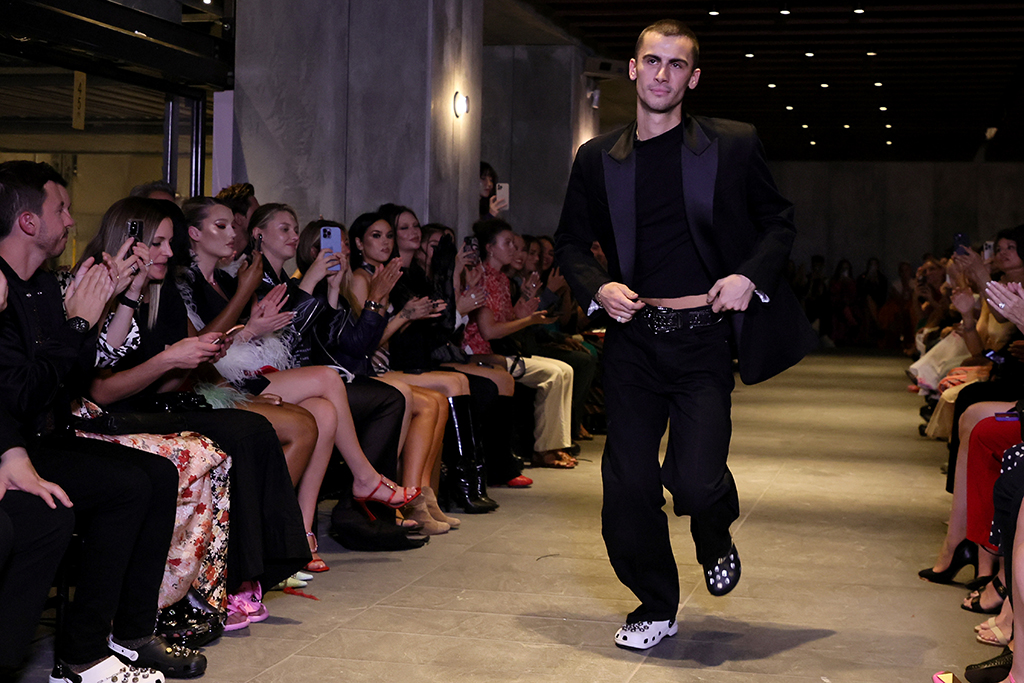 Christian Cowan x Crocs is here. On Tuesday night, the designer held his spring ’23 runway show during New York Fashion Week where models could be seen walking down the catwalk in Crocs.

This marks the debut of the first-ever partnership between the two brands. The collab consists of three styles, which Cowan re-imagined.

“I wanted to have the variation because they all have different kind of uses in your day-to-day life,” he told FN backstage at the show. “And then I wanted to bring our brand identity to the Crocs brand identity. I’m known for glitz and glam, checkerboard, and pink and bows. So it’s just quintessentially us all in one. And it’s just about bringing glamour, which makes so much sense to do it with Crocs because Crocs experiments so much. That’s my favorite thing with fashion — it’s to experiment.”

The Christian Cowan X Crocs Mega Crush Clog, for instance, stands at 61mm tall and features an enhanced rubber tread and heightened proportions. The shoe is crafted in all-black and is detailed in detachable metallic chains that can also be worn as a necklace with a Crocs pendant. For the first time, Christian Cowan X Crocs introduces Jibbitz charms that can be converted into other wearable accessories.

In addition, the collection introduces an ode to yin and yang with the Christian Cowan X Crocs Classic Clogs, featuring a left clog in black and a right clog in white. This new style also includes Jibbitz charms, including jeweled accents and metallic chains.

And lastly, Cowan took the classic Crocs sandals and turned it into bubble-gum pink with oversized pink bows that can also be worn as statement hair clips.

“We are a ready-to-wear brand so I wanted the Crocs to become ready to wear,” he noted on the multipurpose Jibbitz. The Crocs collab also inspired looks in Cowan’s spring ’23 collection, as seen in a black-and-white leather look, reminiscent of the yin and yang clog style.

“This spring collection was about expression and freedom and as you can tell, it’s like every pattern and color and texture under the sun. I wanted to show that it doesn’t always have to be heels. And even though we always do those and still do, it can still be really fabulous,” said Cowan.

The limited-edition capsule retails from $50 to $100. All styles will be available on Crocs’ websites beginning September 28 in the US and Europe, and September 29 in Japan and Australia. The collab will also available in select retail locations across Europe, including Offsprings at Selfridges, Galeries Lafayette and LuisaviaRoma.

A portion of the proceeds from the Christian Cowan X Crocs collaboration will be donated to The Ali Forney Center, which provides assistance to LGBTQIA+ homeless youth in the United States.