Christina Applegate revealed she has gained 40 pounds since being diagnosed with multiple sclerosis and now struggles to walk without the support of a cane.

The 50-year-old actress — who shared her diagnosis in August 2021 — reflected on the difficulties she experienced while filming the final season of her Netflix show, Dead to Me, amid her battle.

‘This is the first time anyone’s going to see me the way I am. I put on 40 pounds; I can’t walk without a cane. I want people to know that I am very aware of all of that,’ she said in a new interview with The New York Times.

Going through changes: Christina Applegate revealed that she gained 40 pounds since being diagnosed with multiple sclerosis; (L) Pictured in December 2021, (R) pictured 2019

Applegate was diagnosed with MS while in production on the final season of the show, which then took a five month break that that she could begin her treatment.

Multiple sclerosis is a disease in which the immune system eats away at the protective covering of nerves, and interrupts the flow of information between the brain and the body.

The Anchorman star said of shooting the last season: ‘I had an obligation. The powers that be were like, “Let’s just stop. We don’t need to finish it. Let’s put a few episodes together [with previously recorded footage].” I said, “No. We’re going to do it, but we’re going to do it on my terms.”‘ 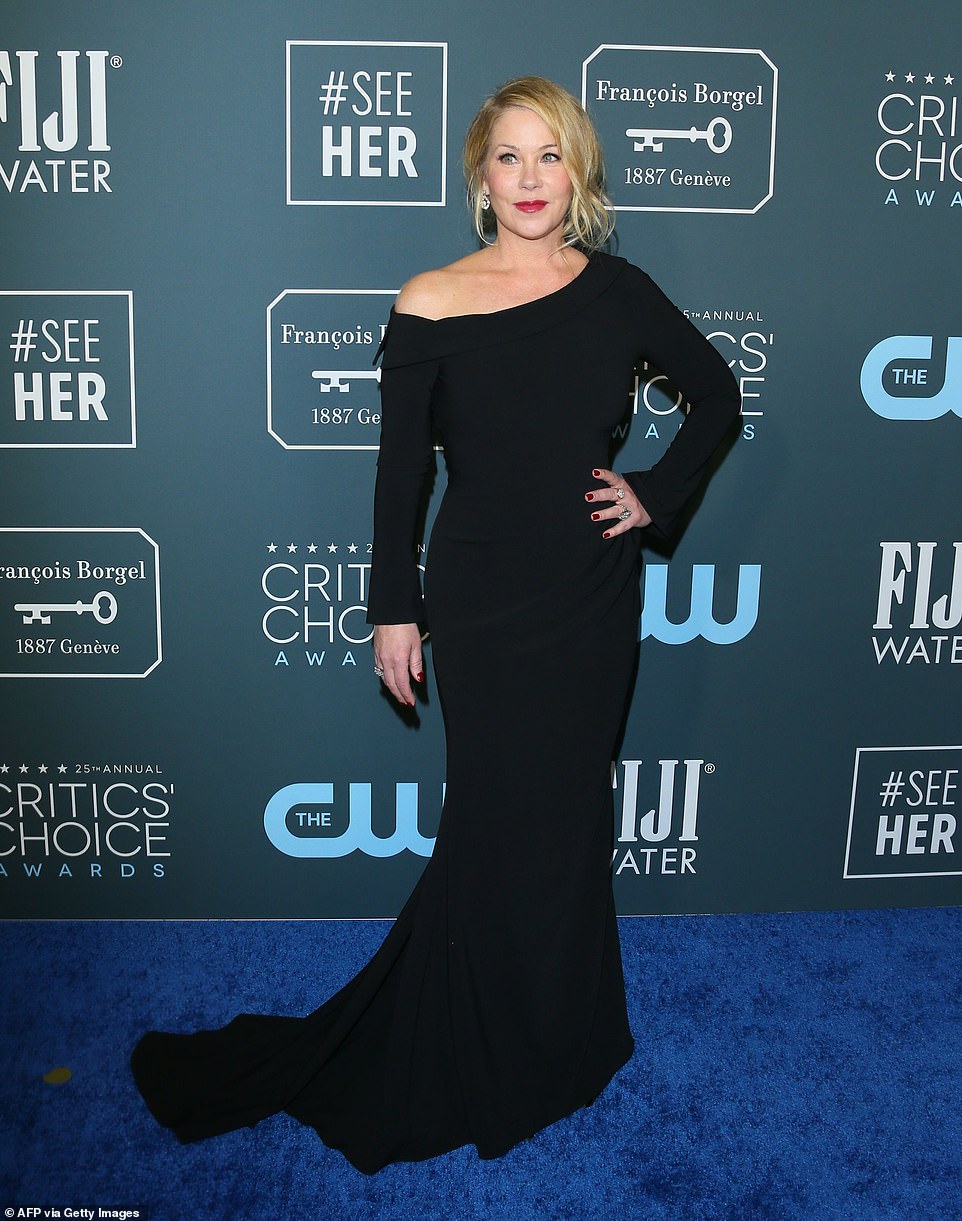 Struggles: The actress, 50 — who shared her diagnosis in August 2021 — reflected on the struggles she experienced while filming the final season of Dead to Me amid her battle in a new interview; Pictured 2020

Applegate also shared that when production of the show — which has earned her two Emmy nominations — paused ‘There was the sense of, “Well, let’s get her some medicine so she can get better.”‘

However, the actress added that ‘There is no better’ and said, ‘I’m never going to accept this. I’m p***ed.’

Ultimately taking the break was ‘good’ for her: ‘I needed to process my loss of my life, my loss of that part of me. So I needed that time. Although it’s not like I came on the other side of it, like, “Woohoo, I’m totally fine.”‘

The Los Angeles born beauty also shared that looking back there were some signs of the disease, as she talked about losing her balance in a dance scene during the first season.

‘I wish I had paid attention. But who was I to know?’ she said. 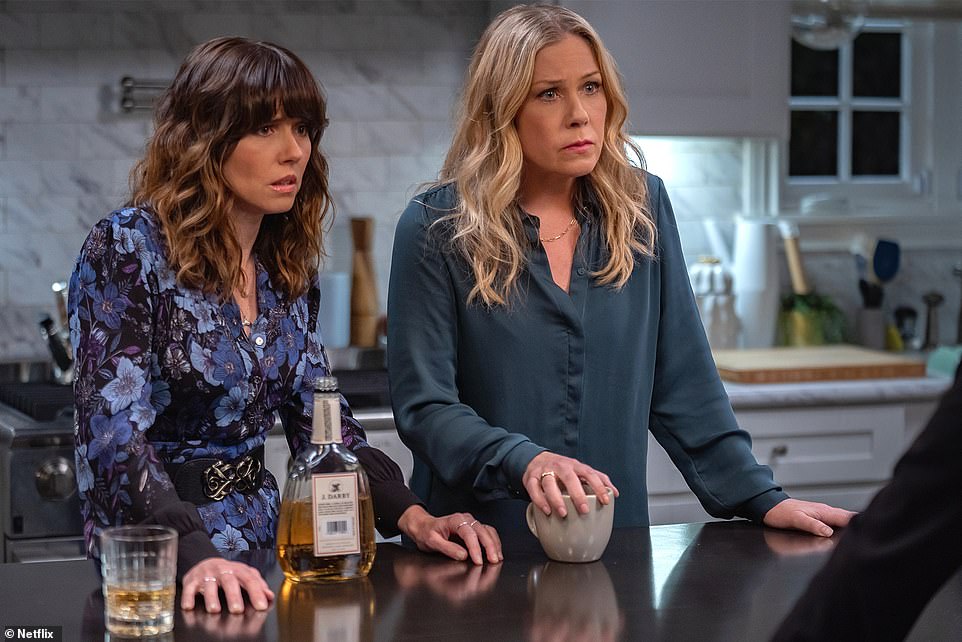 Touching: The star stated she isn’t sure whether she’ll watch the final season, but that she wanted to finish shooting it for her co-star Linda Cardellini; Pictured with Linda

The star shared that once she returned, she needed a wheelchair to get to set due to her declined mobility, and that a sound technician had to hold up her legs in order to get certain shots.

She also shared she couldn’t film shots of her walking into a room because she would need assistance, and that she would lean against doors while standing to be able to stay up.

The Married With Children star also stated she isn’t sure whether she’ll watch the final season as it’s too painful, but that she wanted to finish shooting it for her co-star Linda Cardellini and show creator Liz Feldman.

‘If people hate it, if people love it, if all they can concentrate on is, “Ooh, look at the cripple,” that’s not up to me. I’m sure that people are going to be, like, “I can’t get past it.” Fine, don’t get past it, then. But hopefully people can get past it and just enjoy the ride and say goodbye to these two girls,’ she stated. 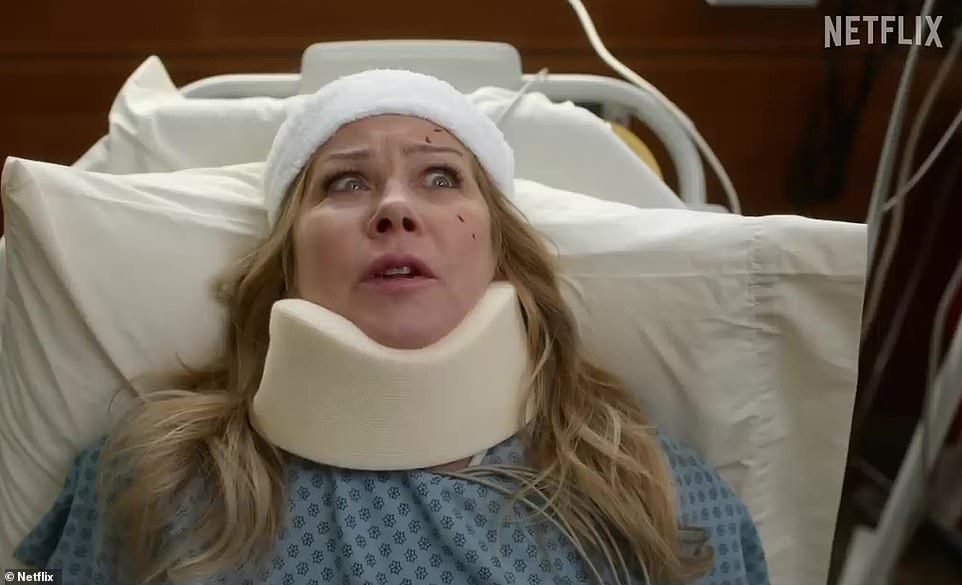 Coming soon: The final season of Dead to Me will be available on Netflix on November 17; Still from season 3 trailer

In the show Applegate stars as sardonic widow Jen Harding who, after the loss of her husband from a hit-and-run accident, crosses paths with free spirited Judy Hale (played by Cardellini) at a grief support group.

Their unlikely friendship, eventually, becomes complicated by secrets, lies, and an accidental murder that will bond them for life.

Dead To Me premiered its first season on the streaming platform with a 10-episode drop in May 2019. The half-hour dark comedy returned for its second season in May 2020, also with 10-episodes.

Though the series was renewed for a third season in June 2020, the coronavirus pandemic and the subsequent Hollywood production shutdown kept production at a standstill. 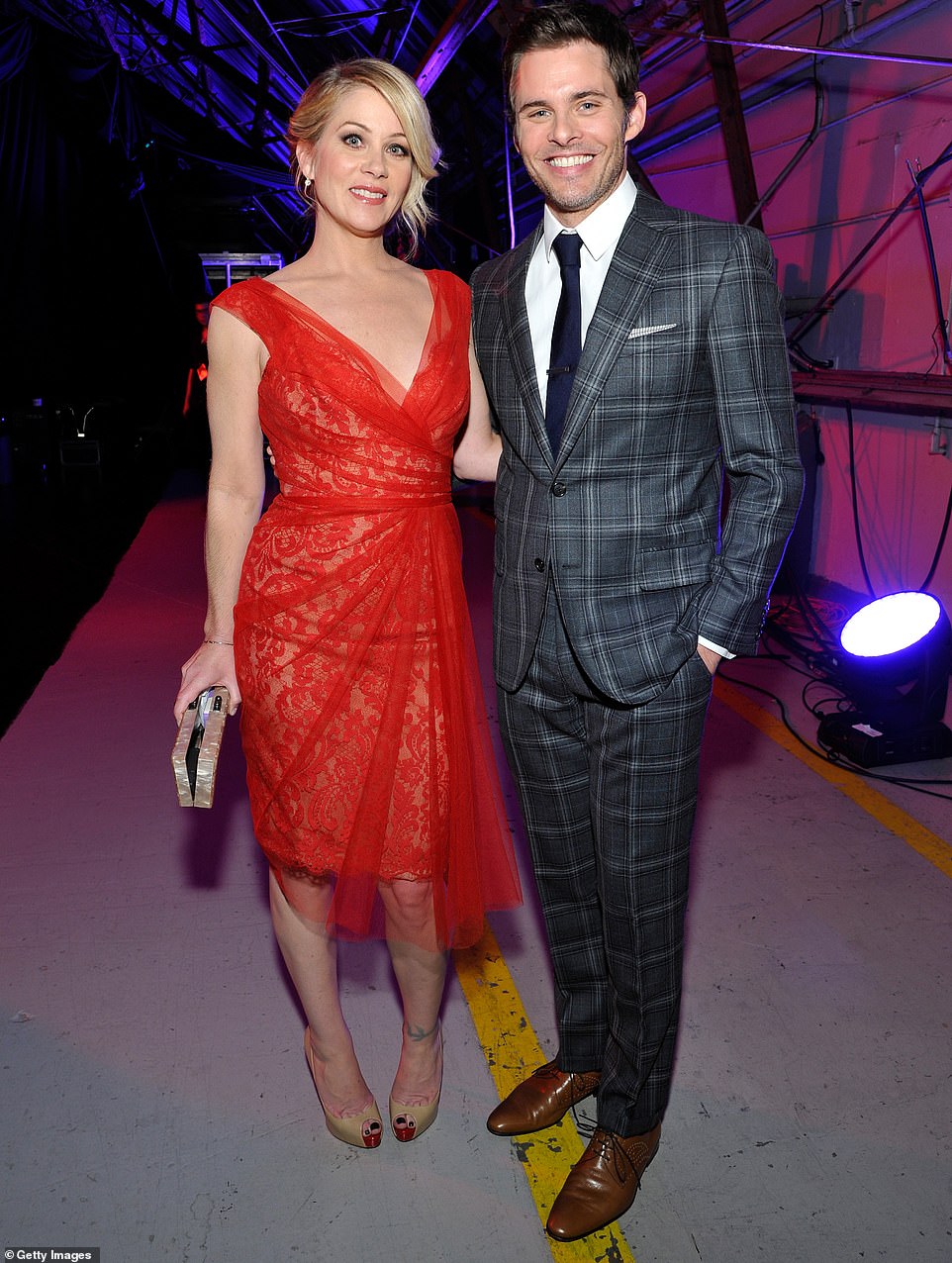 ‘Inspiring’: James Marsden, 49, Christina’s other Dead To Me co-star, recently expressed admiration for her strength amid her battle, telling Entertainment Tonight: ‘Nothing is going to keep her down, and she is going to battle and fight through anything’; Seen together in 2014 in Santa Monica

Production on season three commenced in the spring of 2021 but it was soon delayed after Applegate learned of her multiple sclerosis diagnosis in August.

The final season of Dead to Me will be available on Netflix on November 17.

Christina’s other Dead To Me co-star, James Marsden, 49, opened up about the actress’s strength as she battles through her health condition. Earlier in the year, she was pictured arriving on set of Dead To Me season three with a cane.

‘Nothing is going to keep her down, and she is going to battle and fight through anything,’ the Enchanted star explained to Entertainment Tonight. ‘I admire her as a person.’ 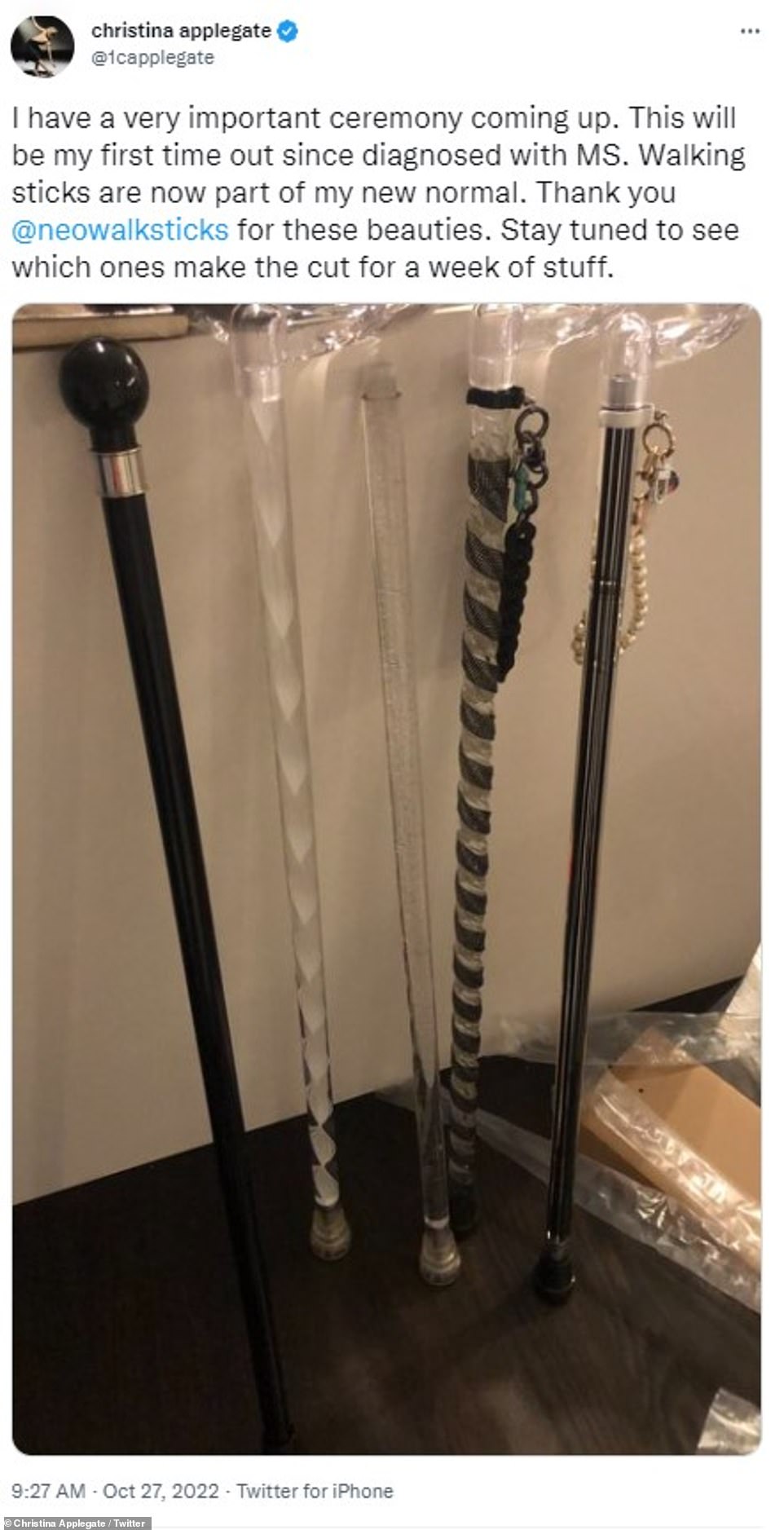 The new normal: Applegate showcased her new walking sticks on Twitter in October discussing how needing help with walking is now her ‘new normal’

Announcement: The star revealed that she was diagnosed with MS last year in August 2021 on Twitter

He also added that, ‘Anything life will throw at her, she will figure out a way to not let it keep her down, and she is doing exactly that. It’s really inspiring to see.’

In October Applegate showcased her new walking sticks on Twitter ahead of an event, discussing how needing help with walking is now her ‘new normal.’

The beauty revealed her diagnosis in August 2021, and at the time, tweeted that she has received overwhelming support from those also affected by the condition. 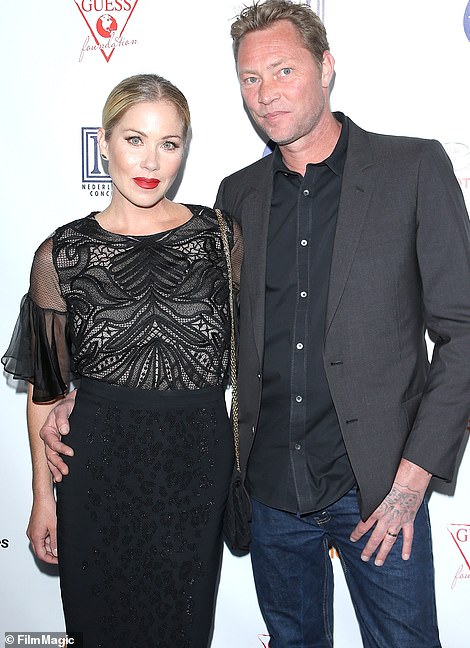 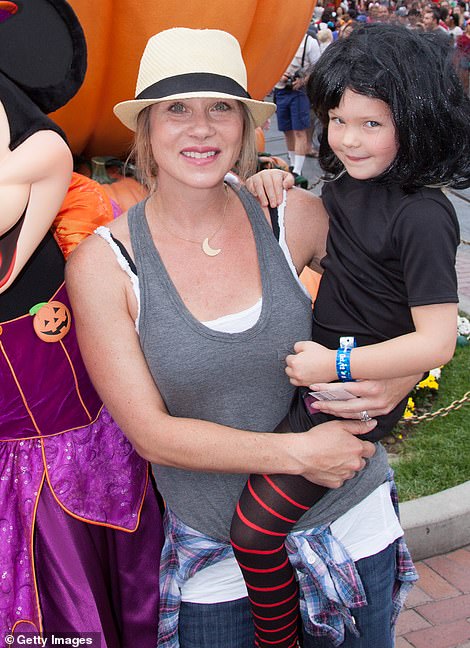 Family: The Vacation actress is married to Dutch bassist, Martyn LeNoble, 53. The couple said ‘I do’ to nearly ten years ago in 2013. They have one daughter, Sadie, who was welcomed to the world in 2011; Pictured  left with Martyn in 2016 and right with Sadie in 2015

‘Hi friends. A few months ago I was diagnosed with MS. It’s been a strange journey. But I have been so supported by people that I know who also have this condition,’ Christina had explained at the time.

‘It’s been a touch road. But as we all know, the road keeps going,’ the star added, showing her positivity towards her health condition.

The Vacation actress also has the loving support of her Dutch bassist husband, Martyn LeNoble, 53, whom she said ‘I do’ to nearly ten years ago in 2013. The couple have one daughter, Sadie, who was welcomed to the world in 2011.

In 2008 battled breast cancer and underwent a double mastectomy. She later had reconstructive surgery.

In 2017, Applegate discovered she had the BRCA1 gene mutation, which predisposes her to developing cancer. She opted to have her ovaries and fallopian tubes removed.

Applegate rose to prominence as a child actress at the age of 15, while starring as Al and Peggy’s promiscuous daughter Kelly Bundy in the Fox sitcom Married with Children, which ran from 1987–1997.

She also received much acclaim for her portrayal of anchorwoman Veronica Corningstone in the 2004 comedy films Anchorman: The Legend of Ron Burgundy and Wake Up, Ron Burgundy: The Lost Movie.

She is the recipient of a Primetime Emmy Award (for her guest role in the NBC sitcom Friends) and has received four Golden Globe Award nominations as well as one Tony Award nomination. 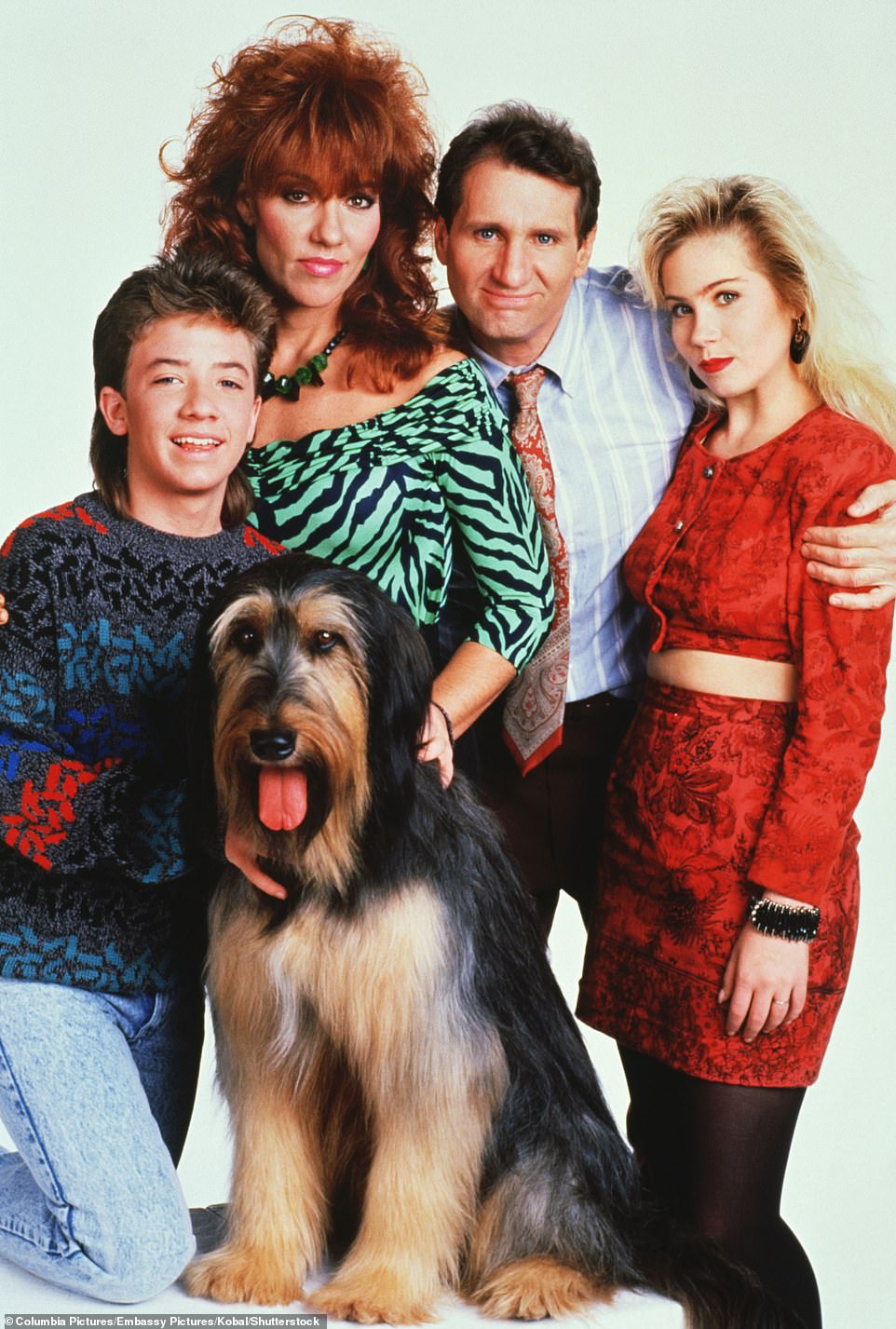 Claim to fame: Applegate rose to prominence as a child actress at the age of 15, while starring as Al and Peggy’s promiscuous daughter Kelly Bundy in the Fox sitcom Married with Children, which ran from 1987–1997; Pictured with Katey Sagal, Ed O’Neill, and David Faustino

WHAT IS MULTIPLE SCLEROSIS?

Multiple sclerosis (known as MS) is a condition in which the immune system attacks the body and causes nerve damage to the brain and spinal cord.

It is an incurable, lifelong condition. Symptoms can be mild in some, and in others more extreme causing severe disability.

MS affects 2.3 million people worldwide – including around one million in the US, and 100,000 in the UK.

It is more than twice as common in women as it is in men. A person is usually diagnosed in their 20s and 30s.

The condition is more commonly diagnosed in people of European ancestry.

The cause isn’t clear. There may be genes associated with it, but it is not directly hereditary. Smoking and low vitamin D levels are also linked to MS.

The majority of sufferers will have episodes of symptoms which go away and come back, while some have ones which get gradually worse over time.

Symptoms can be managed with medication and therapy.

The condition shortens the average life expectancy by around five to 10 years.