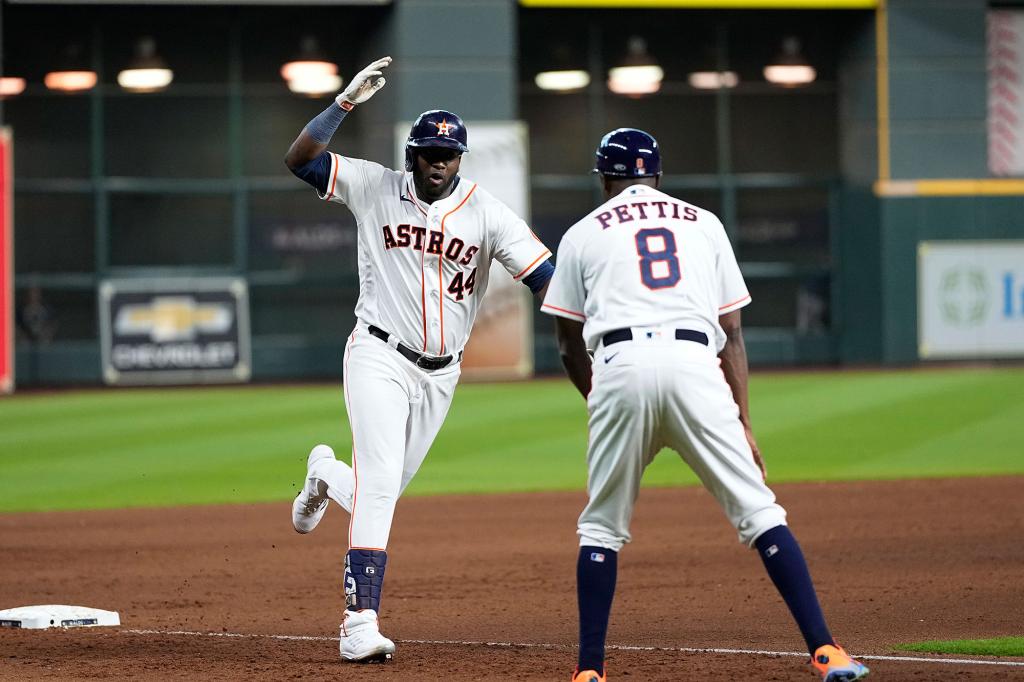 Yordan Alvarez kicked off his 2022 postseason run with a literal bang.

The Astros slugger punctuated an 8-7 comeback win over the Mariners with a 438-foot, three-run walk-off homer on Tuesday in Game 1 of their AL Division Series against the Mariners on Tuesday.

Alvarez’s two-out blast came off Seattle’s Robbie Ray with an exit velocity of 116.7 mph. It capped a five-inning rally over the final two frames, and sent the crowd and players at Minute Maid Park — including Alvarez’s parents — into a frenzy.

“Very happy, especially with my family here in this moment it means a lot to me,” he said on the broadcast, through a translator, after the game. “Hitting a home run to decide the game, very special.”

“I think I was just going up there trying to make good contact on the ball,” he added. “I just went up there being aggressive.”

The longball marked just the second time in MLB playoff history a team down to its final out walked off via a homer, joining Kirk Gibson’s infamous 1988 World Series dinger.

The heroics were necessary after the Mariners jumped out to an early 4-0 lead in the first two innings against Astros starter Justin Verlander. The veteran Cy Young candidate lasted four innings, giving up six runs on 10 hits, striking out three and walking one in his first postseason action since 2019. It marked the second-most runs the 39-year-old has ever given up in the postseason.

Alvarez, who hit 37 homers during the regular season, finished the afternoon going 3-for-5 with two runs and five RBIs.

For Houston, attempting to win its first World Series title since 2017 despite two more appearances in it in 2019 (lost to Nationals) and 2021 (lost to Braves), it means a 1-0 lead in their best-of-five series with the wild-card Mariners.

Game 2 is scheduled for Thursday in Houston.