The FIFA World Cup 2022 ended on a sorry note for Cristiano Ronaldo after Portugal suffered a 0-1 defeat at the hands of Morocco in the quarter-finals. The result all but brought an end to Ronaldo’s career in international football but what has hurt his fans the most is the fact that the Portugal captain didn’t even start for the team in the last two matches of the World Cup. Ronaldo’s partner Georgina Rodriguez has taken a swipe at the team’s head coach Fernando Santos over the decision.

Taking to Instagram, Georgina wrote: “That friend for whom so many words of admiration and respect you have. The same as when you got into the game, he saw how everything changed, but it was too late. You can’t underestimate the best player in the world, his most powerful weapon. Nor can you stand up for someone that he doesn’t deserve it. Life gives us lessons. Today we have not lost, we have learned. Cristiano, we admire you.” 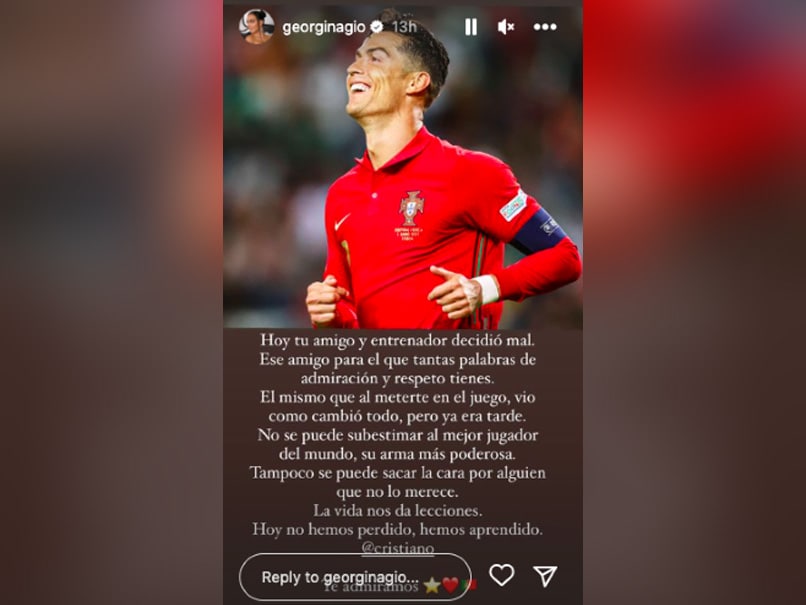 Santos, when asked about his decision to bench Ronaldo, said that he had no regrets as the same team had done really well against Switzerland in the last match which his team had won 6-1.

“No, I don’t think so, no regrets,” the 68-year-old affirmed after the match. “This was a team that played very well against Switzerland. Cristiano is a great player, he came in when we thought it was necessary. No, I have no regrets.”

With the defeat against Morocco, not just Portugal’s FIFA World Cup campaign came to an end, but quite possibly, the 37-year-old Ronaldo’s dream to lift the biggest trophy in world football.

Change Has To Be From Grassroots Level: Ex-Indian Athlete