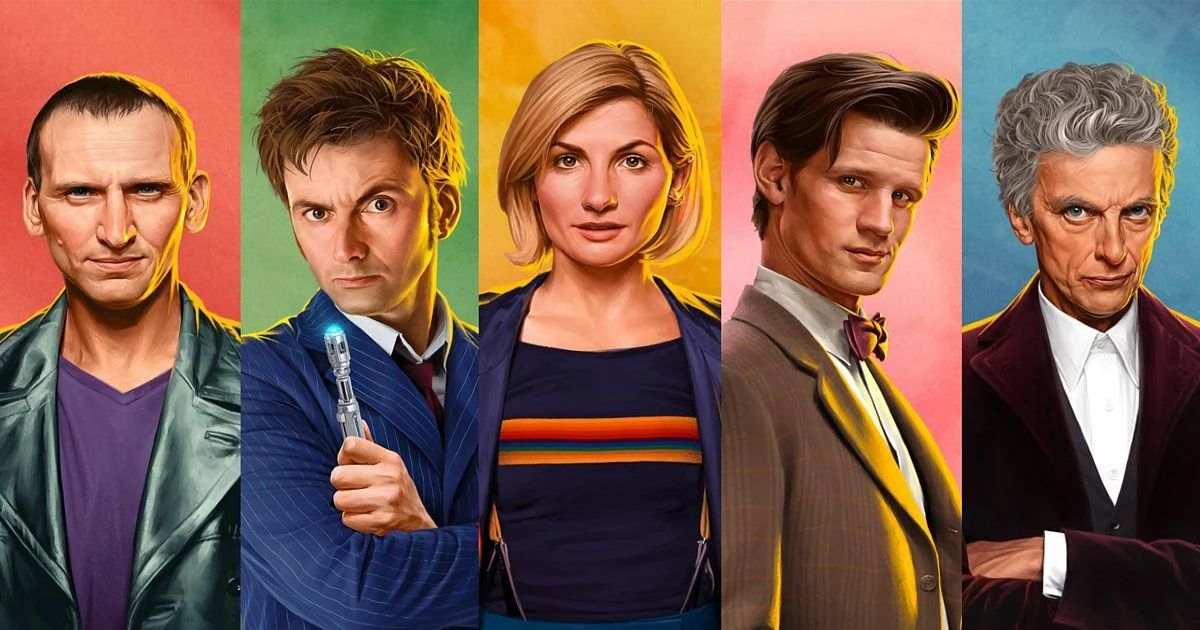 It is hard to believe the current era of Doctor Who has been on the air for 17 years. The original Doctor Who ran from 1963 to 1989, 26 years. Then it took a 16-year hiatus (with one made-for-TV movie attempt in 1996) until the franchise returned for a new generation in 2005. The new Doctor Who series introduced new characters, laid out a new status quo for the time-traveling alien known as the Doctor, as well as bringing back many iconic classic foes like the Daleks, the Cybermen, and the Master.

One of the most iconic elements of the Doctor is his ability to regenerate, allowing a new actor to step into the role while allowing the series to maintain its continuity. In the new era, five performers have been the star of the series: Christopher Eccleston, David Tennant, Matt Smith, Peter Capaldi, and most recently Jodi Whitaker.

Ncuti Gatwa is the next actor cast to take over the role, yet Whitaker’s final episode “The Power of the Doctor” dealt an unexpected twist. Instead of regenerating into Gatwa’s Doctor, she instead regenerated into a Doctor that looked like Tennant, a previous Doctor. This mystery will be answered in 2023 as Doctor Who celebrates its 60th anniversary and new streaming home on Disney+. With all that, let’s take a look back and see how each regeneration in the new Doctor Who series ranks.

While not a full regeneration, this makes the list just because of the sheer media attention it garnered. In the penultimate episode of Series 4, “The Stolen Earth,” The Doctor is shot by a Dalek when he is about to reunite with his old companion Rose, forcing him to regenerate to survive. The episode ends on a cliffhanger, leaving the audience to wonder who would be the new Doctor with speculation ranging from Robert Carlyle to Jason Statham.

Yet the next episode began with Tennant’s Doctor being able to siphon his regeneration into his severed hand (which happened in Tennant’s first episode after his regeneration), which eventually led to the creation of a second Doctor that looked like David Tennant, but one that was human. It was a good cliffhanger but a sort of narrative cheat to get audiences hooked for the finale.

7/8 Paul McGann Finally Gets To Regenerate

Paul McGann was cast as the Doctor in the 1996 TV movie that failed to relaunch the franchise. When the series was brought back in 2005 and Christopher Eccleston showed up, many fans rightfully assumed at some point McGann’s Eighth Doctor turned into Eccelston’s Ninth Doctor. However, McGann got to appear in the new Doctor Who series in the webisode “The Night of the Doctor,” a small prequel to the 50th Anniversary special “The Day of the Doctor.” Here, audiences see McGann willingly allow himself to regenerate into becoming the previously unknown War Doctor (John Hurt).

This retcon works as it gives McGann a chance to give a powerful performance, a string monologue, and also allows for his Doctor not to be the one responsible for supposedly destroying the Timelord world of Gallifrey and killing his people.

John Hurt’s War Doctor was first glimpsed in the episode “The Name of the Doctor” and became a major character in the 50th anniversary special “The Day of the Doctor.” This incarnation is a version of the Time Lord that gave up the title of Doctor to partake in the Time War that became the modern series backstory. His later incarnations tried to move on past this version of who they were, yet it is revealed in the 50th anniversary special he did not destroy the Timelord homeworld of Gallifrey but instead, alongside 12 of his other incarnations, saved it but forgot about it due to time travel rules.

Related: These Are the Best Reboots and Remakes of Canceled TV Shows, Ranked

The War Doctor is shown, having succumbed to old age beginning his regeneration into Christopher Eccleston’s Ninth Doctor, setting up his first appearance in “Rose” which appears to be his first time as the Doctor as he finally gets a look at his new face. It brings the new Doctor Who era back to the beginning bringing everything full circle.

Christopher Eccleston only played the Doctor for one season before deciding to depart. This was reportedly due to behind-the-scenes conflicts between the actor and BBC America, and in his final episode, he changes into David Tennant’s Tenth Doctor.

For an entire generation of fans, this marked the first time they were introduced to the concept of regeneration in the Doctor Who universe. Much like the character Rose, the audience watched the person they had known and follow transform into an entirely different person, so the episode works as both a great regeneration in the episode as well as the meta-narrative of how fans experience these regenerations.

The most recent regeneration, Jodie Whitaker was first announced as The Doctor in 2016 but did not get his first episode broadcast until 2018. She had a long road with the Doctor and was a new era for the character. While her storylines often received mixed reviews from critics, it is commonly agreed that Whitaker gave a great performance as the Doctor.

Related: Here Are All the Dr. Who Doctors and Where They Rank as the Time Lord

In contrast to all the previous Doctor’s, Whitaker does not regenerate inside her TARDIS. Instead, she steps outside to look over a cliffside beach onto a sunrise as she begins her regeneration. There was a strong possibility that Doctor Who would not be returning for another series and this might be the end of Doctor Who so the idea of the Doctor’s story going out on one grand regeneration thematically felt right. Instead, Whitaker’s regeneration is now the biggest question as she turns into a face the Doctor has previously worn. Time will tell how this is explained, but it was certainly not what anyone saw coming.

Matt Smith’s time on Doctor Who saw the franchise truly grow to global popularity the likes of which had never been seen. For many he was their introduction to this franchise and following the grand celebration of the 50th anniversary special, one month later he regenerated in “The Night of the Doctor.”

Smith’s regeneration is a sweet recount of his time as the Doctor and feels very much like the actor breaking the fourth wall and thanking the fans for his tenure in the role. In contrast to the regenerations that came before and what would come after, Smith’s transformation into Peter Capaldi’s Twelfth Doctor is quick and very shocking for the audience and makes audiences miss Smith all the more.

2/8 Twelfth Doctor Reminds His Future Self To Be Kind

Peter Capaldi’s tenure as the Doctor also came as showrunner Steven Moffatt was ending his time on the series. A writer under original showrunner Russell T. Davies, Moffatt took over Doctor Who starting with Matt Smith. Similar to Smith’s regeneration, Capaldi’s is an unofficial fourth wall break. Here, The Doctor speaks on what Moffatt’s thesis on Doctor Who is as a franchise, and a reminder to those who will take the franchise forward. The Doctor reminds himself (and Moffatt reminds the audience) to never be cruel or cowardly and to always choose love. He reassures Doctor Who as a mythic figure for children, someone who will come to their aid. The final line “I Let You Go” is Moffatt, Capaldi, and The Doctor ending their tenure.

Then Capaldi regenerates into Jodie Whitaker’s Thirteenth Doctor, and all of Whitaker’s scenes are written by new showrunner Chris Chibnall similar to how Moffatt got to write all of Smith’s dialogue after Tennant regenerated. Just like that episode, The Doctor is falling to Earth in the Tardis ready for a new era of stories to begin.

1/8 David Tennant Does Not Want To Go

For many, David Tennant is the face of Doctor Who. He is so popular that he returned in both the 50th Anniversary Special and recently was the face the Doctor regenerated into leading into the 60th anniversary special. The writers knew how beloved David Tennant was as the Doctor, and they made his final episode an event for the ages.

Split across two-holiday specials, Christmas and New Year’s Day, David Tennant’s regeneration episodes are treated like a major death (and had been teased in a year’s worth of specials). This was the grand finale, and his final episode allows him the chance to reunite with all his major companions one last time to say goodbye. Tennant stands in his TARDIS, and his speaking “I don’t want to go” was the exact expression fans were feeling with this change. Tennant’s regeneration is big, violent, and destructive. It is symbolically tearing down the old and leading into a new era.

Matt Smith’s Doctor enters the story in a chaotic mess, much like the personality would define his character. This marked Russell T. Davies’ time with Doctor Who over (but now is set to return for the new series) and he handed the reigns over to Steven Moffatt. A new decade began with a bitter-sweet goodbye and an exciting new beginning, the perfect encapsulation of the regeneration process on Doctor Who.