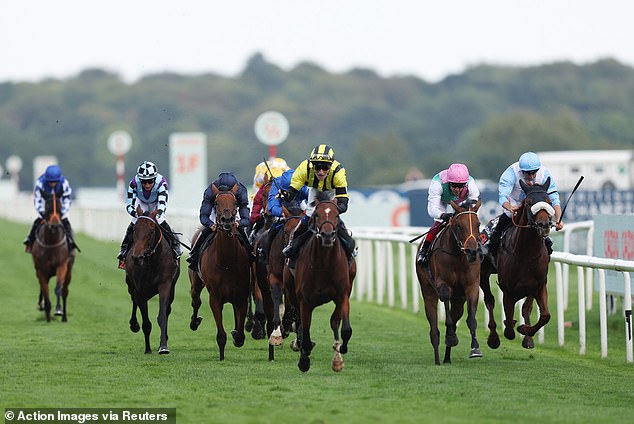 It was the biggest day of the year at Doncaster on Sunday for the 246th running of the oldest British Classic but the victory of Eldar Eldarov seemed of secondary importance.

The race, first run when George III was on the throne in 1776 to the backdrop of the American War of Independence, does matter but St Leger day 2022 was about racing having a stage to honour and remember its greatest fan.

For 48 hours British racecourses had been closed since the death of Queen Elizabeth II. On Sunday the sport returned and the priority was to strike the right tone. 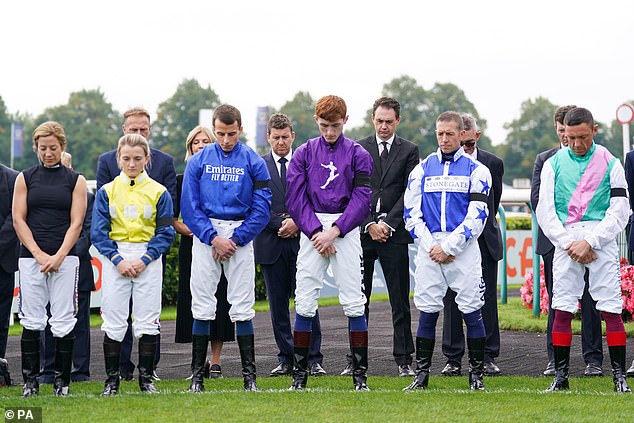 Other sports had already resumed, although football decided to shut down for the weekend. But the feeling around Doncaster’s Town Moor was that the sport closest to the late monarch’s heart had got it about right.

A monotone image of the Queen cheering home a winner adorned the front page of the racecard. Inside were numerous pages chronicling her connection with the sport.

Before racing started a big screens around the course showed a short film which included some of her biggest days in the Sport of Kings which most of us have only known as the Sport of Queens.

It was followed by an impeccably observed two-minute silence as jockeys including Frankie Dettori, Hollie Doyle, Jim Crowley and William Buick, trainers headed by Charlie Appleby, Andrew Balding and Alan King plus Doncaster staff and officials from across the sport, including BHA chief executive Julie Harrington, gathered in the paddock.

It was then time for the first singing of God Save The King on a British racecourse for more than 70 years. There were books of condolences around the track, including one in the weighing room, black armbands for jockeys and an area set aside for floral tributes.

Just as the Oval had banned fancy dress from the Test on Saturday, frivolity was absent. The jockey simulator which allows spectators to have a go at being a rider normally whooping and screaming had been dismantled. The right decision. 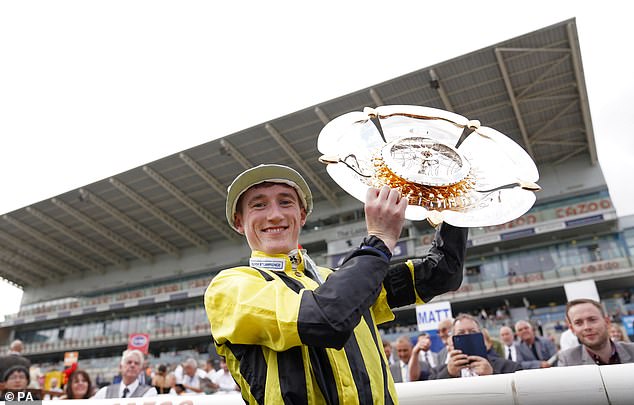 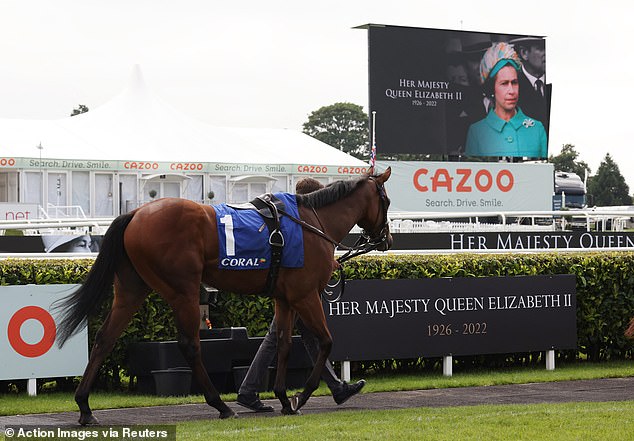 Dettori, who rode more than 50 winners in the Queen’s colours, admitted the mood among his fellow jockeys was subdued.

‘Of course it is a bit quiet in the weighing room but that is quite natural,’ he said. ‘You can feel a sense of emptiness. We are going to be racing but nobody is going to be jumping up and down.’

So there was no flying dismount when Dettori won the opening Champagne Stakes on Chaldean. Appropriately, the impressive winner is in the care of royal trainer Andrew Balding, who said: ‘It’s been a tough week but maybe that will lift the mood a little at home but she has left a big hole to fill.’

The estimated crowd of 12,000 may have been around half of what would have been expected if the race had been run on Saturday and represented a substantial financial hit for Arena Racing Company, who run Doncaster, on top of losing Friday’s card but they did all the right things. 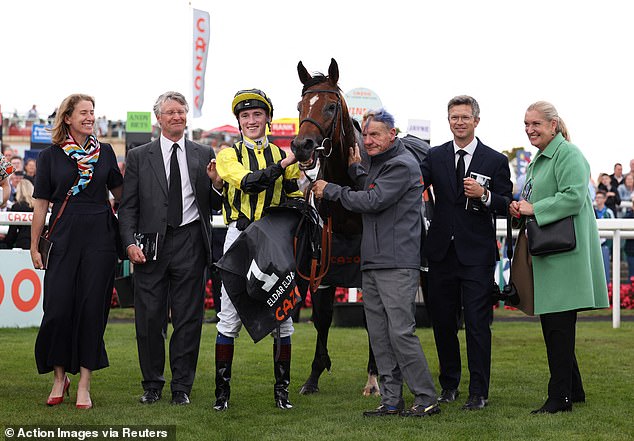 Before the St Leger a film of the Queen’s 1977 St Leger winner Dunfermline was shown around the course and while Queen Elizabeth II was mainly associated with Derby Day and Royal Ascot, there was an appropriate and poignant connection to Doncaster and the St Leger.

She was absent when Dunfermline, ridden by Willie Carson and trained by Dick Hern, won in Silver Jubilee year as duty called and the Queen was at Balmoral, hosting the then Labour Prime Minister James Callaghan.

But she had been at the St Leger Festival in 1953, three months after her coronation, when Winston Churchill was also in attendance. 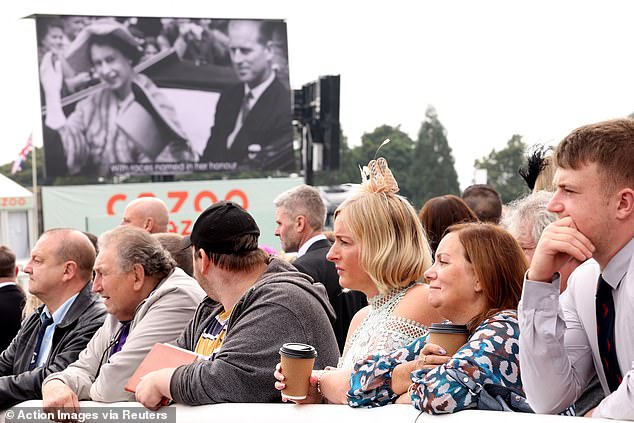 Our longest-serving monarch’s first connection to the St Leger was to shape her love of the sport. Her father King George VI owned Sun Chariot, one of the greatest ever fillies who landed the English fillies’ Triple Crown — the 1,000 Guineas, Oaks and St Leger — in 1942.

The teenage Princess Elizabeth had been taken to see Sun Chariot at the stable of trainer Fred Darling at Beckhampton in Wiltshire.

It was a treasured experience, the first time she had seen a thoroughbred galloping, and it inspired her life-long love of racing. Recalling the moment she said: ‘I had never felt the satiny softness of a thoroughbred before. It’s a wonderful feeling.’

Sun Chariot’s war-time St Leger was staged at Newmarket while Doncaster was used as a depot for the Royal Army Veterinary Corp and a Prisoner of War camp.

But in this corner of South Yorkshire they marked another moment in history. It was sober and sombre but felt right. 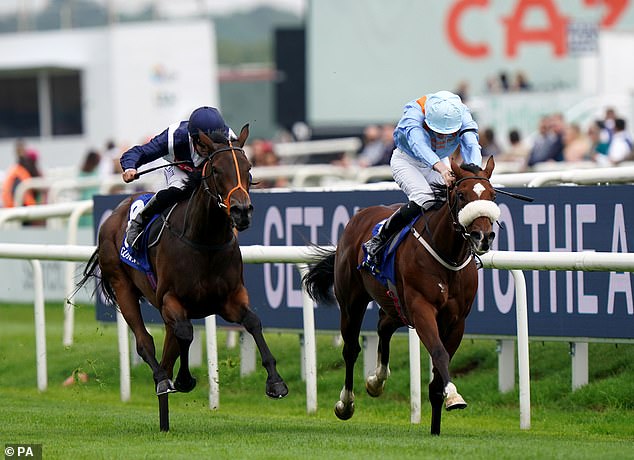