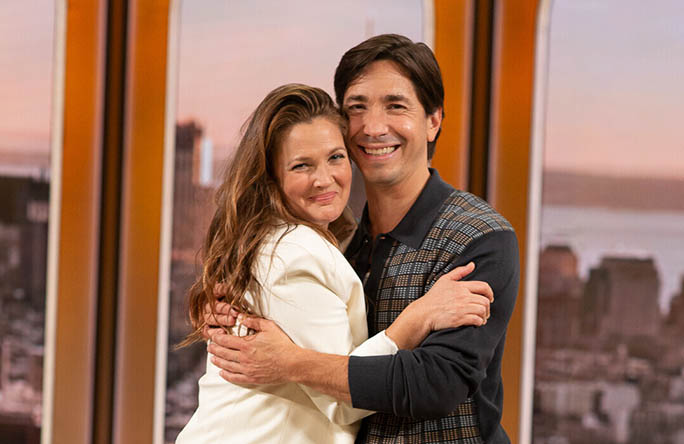 Drew Barrymore has reunited with her former love Justin Long. The pair had an emotional heart-to-heart during the season three premiere of “The Drew Barrymore Show” on Monday. During their conversation, Barrymore and Long, who dated on and off from 2007 to 2010, reminisced on their relationship and agreed that they will always adore one another.

Barrymore was uber-chic to kick off the new season of her morning talk show. The five-time Emmy Award-winning actress served a monochromatic style moment, appearing onstage in a cream suit.

Barrymore’s ensemble consisted of a boxy blazer. She teamed the overcoat with a simple T-shirt and matching trousers. The bottoms had an oversized fit with front pleats and a wide hemline.

The “Charlie’s Angels” star parted her hair on the side and styled it in loose waves. To amp up her look, she accessorized with statement gold drop earrings and a watch.

Long was casually dressed for the appearance. The “He’s Just Not That Into You” actor wore a plaid sweater with cargo pants and white sneakers.

When it came down to the shoes, Barrymore elevated her business-chic ensemble with a pair of platform sandals. The towering silhouette had a chunky outsole with a small open-toe and was set on a 6-inch block heel.

The platform shoe trend is one of the easiest styles to incorporate into any wardrobe. Post-pandemic, platform shoes have emerged as one of the most popular footwear styles. The dramatic heel easily adds flair to any outfit.

Barrymore’s shoe style ranges from bohemian to glamorous. The producer often wears platform boots such as her latest style, but also rotates pointed-toe pumps and platform sandals by Jimmy Choo, Gucci and Larroude, most frequently on her talk show. Off-duty, she can also be seen in Dr. Martens boots, Converse sneakers and Crocs slide shoes.

PHOTOS: Check out some of Drew Barrymore’s best street style moments in the gallery.