On Friday night, Dua Lipa joined the crowd of celebrities at Madison Square Garden for the iHeartRadio Z100’s Jingle Ball in New York. On the red carpet, the musical artist wore a classic black gown with a modern twist. The floor-length piece ended in a small train behind her, but it was the top that was particularly eye-catching.

The spaghetti straps held up the cutout bodice, which had a glimmering halter strap rising from the plunging neckline to wrap around Dua Lipa’s neck. The rest of the bodice was fitted tightly to her form, before spreading out again into a short skirt flare over the longer fabric beneath. 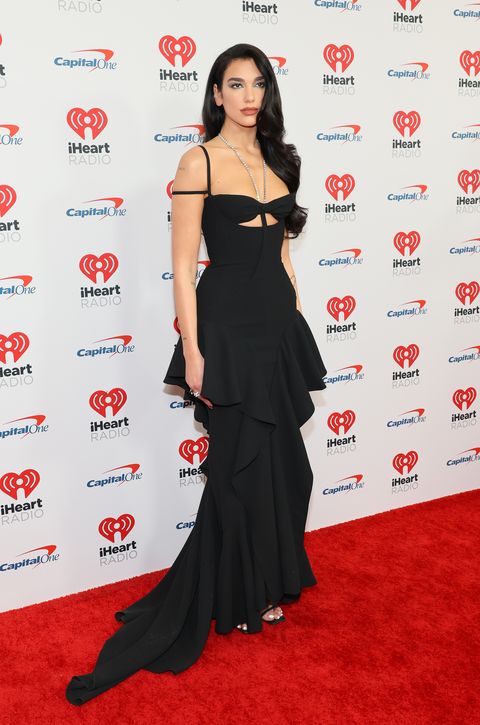 With the dress she wore a pair of black heeled sandals, revealing a bright white pedicure. She left her hair down and had a smokey eye with a muted red lip. 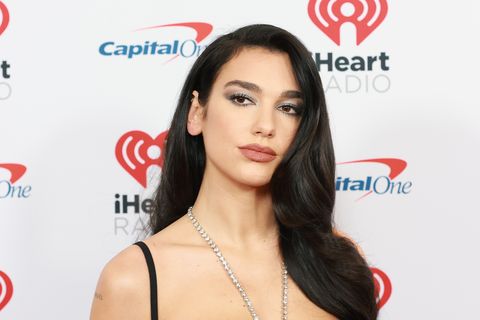 Dua Lipa later shared another look from the night on her Instagram timeline, in which she’s wearing a rhinestone studded matching two-piece. The top is a silver and white halter bra forming organic shapes around the bust and her torso. Below, she was wearing white bottoms with an appliqué in the same pattern as her bra. She also changed her makeup, sporting an icy blue-silver shadow on her eyelids and a coral lip. For this outfit, Dua Lipa’s hair was half up, spilling over one shoulder in beautiful waves.

The pop star just finished her Future Nostalgia tour, and recently told Variety that she is working on her third album.

“I’ve carried on working, and I really feel now that it’s starting to sound cohesive,” she said. “So I’m going to keep writing in the early months of the new year and see where that takes me.”

She continued, “The album is different — it’s still pop but it’s different sonically, and there’s more of a lyrical theme. If I told you the title, everything would make sense — but I think we’ll just have to wait.”