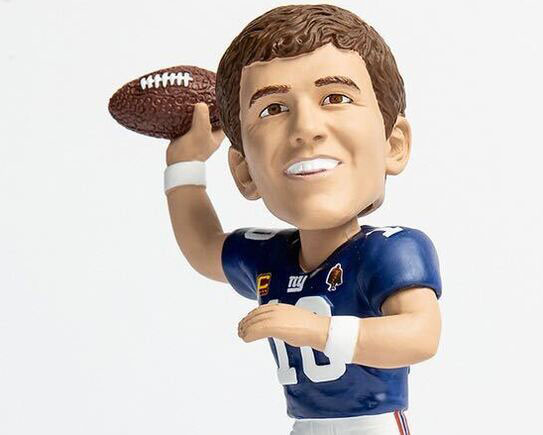 Eli Manning received a sneak peek at his bobblehead, which will be given away at the Giants’ game Sunday, and it’s already missing an arm.

On Thursday’s episode of The Post’s Blue Rush podcast, Manning said he had given a bobblehead to his son Charlie, who’s 2 ¹/₂ years old, earlier that morning. Within 45 seconds, the right arm — which holds a football which the Manning replica looks prepared to throw — had snapped off.

“The head bobbles,” Manning said, “so I guess we’ll keep it.”

Perhaps, Manning said, that missing arm is symbolism, since he’s retired and no longer throwing passes. The quarterback ended his career after the 2019 season following 16 years with the Giants, including 210 consecutive games started between 2004 and 2017.

“Maybe he’s telling me I need to get back out there and start throwing balls with him,” Manning said.

The bobblehead will be given to the first 25,000 fans to arrive at Sunday’s game against the Falcons. Manning’s No. 10 will be retired at halftime, and the 16-year quarterback will be inducted into the Giants Ring of Honor.

Manning said the bobblehead resembled like a mix of himself and Daniel Jones — in the right vicinity, not perfect but close enough, he joked.

“I think they had both molds, and they combined them together,” Manning said.

One cost of going unvaccinated? Your insurer may ask you to pick up the tab for COVID-19 treatment