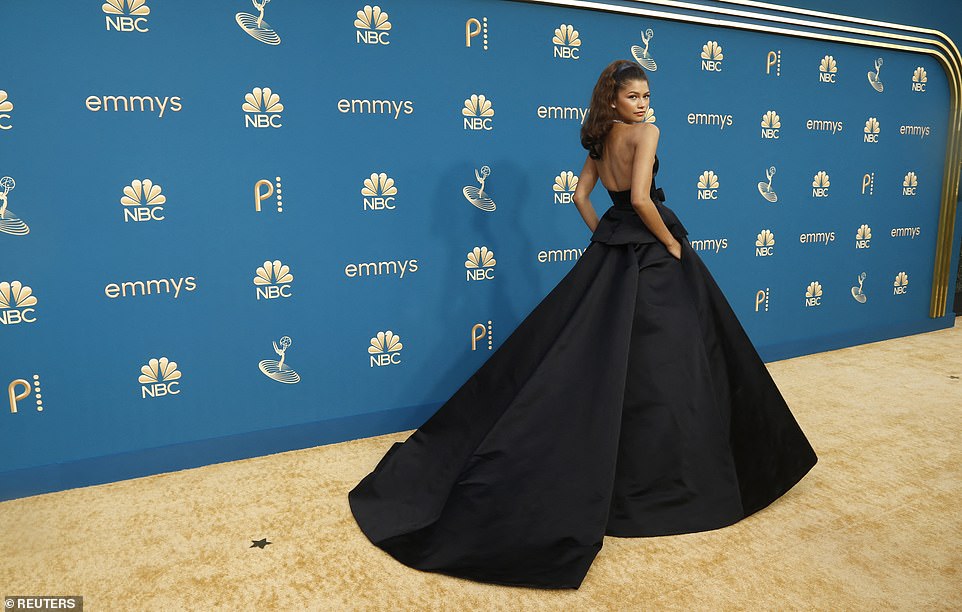 The biggest stars in Hollywood descended upon the Microsoft Theater in Los Angeles on Monday night for the 74th Annual Primetime Emmy Awards.

And kicking off the red carpet in style was actress Zendaya, who looked like an classic Hollywood movie star in an elegant black ball gown by Valentino with a diamond choker necklace from Bulgari.

The awards show took place after a two-year absence during the ongoing coronavirus pandemic that saw the ceremony moved to the Crypto.com Arena in 2020 and the Event Deck at L.A. Live in 2021.

Zendaya looked mesmerizing in a strapless black gown that featured a corset-style top half with a voluminous skirt for the bottom half.

The 26-year-old actress paired the elegant number with a statement diamond necklace and her hair half up, half down.

Breathtaking: Zendaya looked mesmerizing in a strapless black gown that featured a corset-style top half with a voluminous skirt for the bottom half 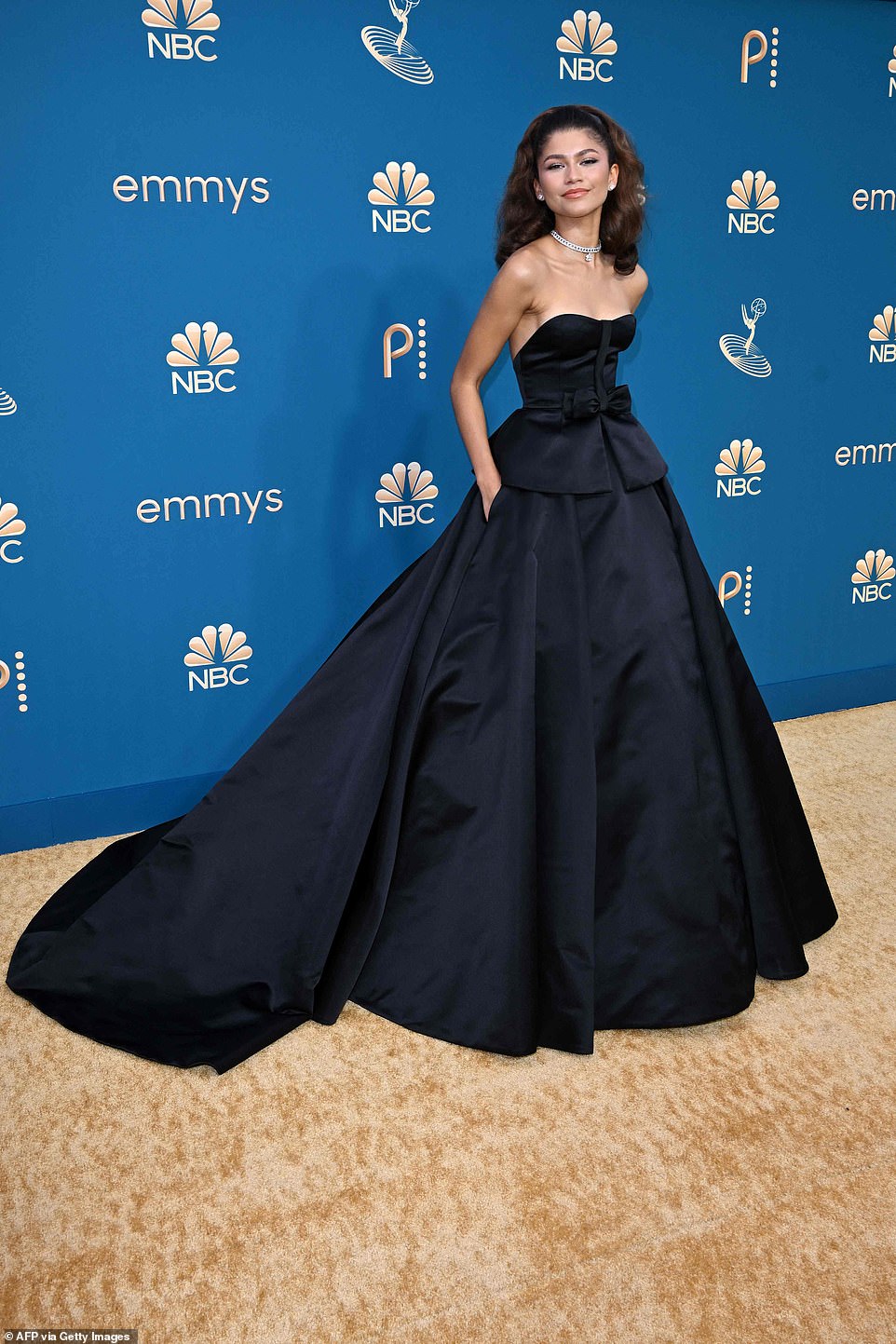 Gorgeous: The 26-year-old actress paired the elegant number with a statement diamond necklace and her hair half up, half down 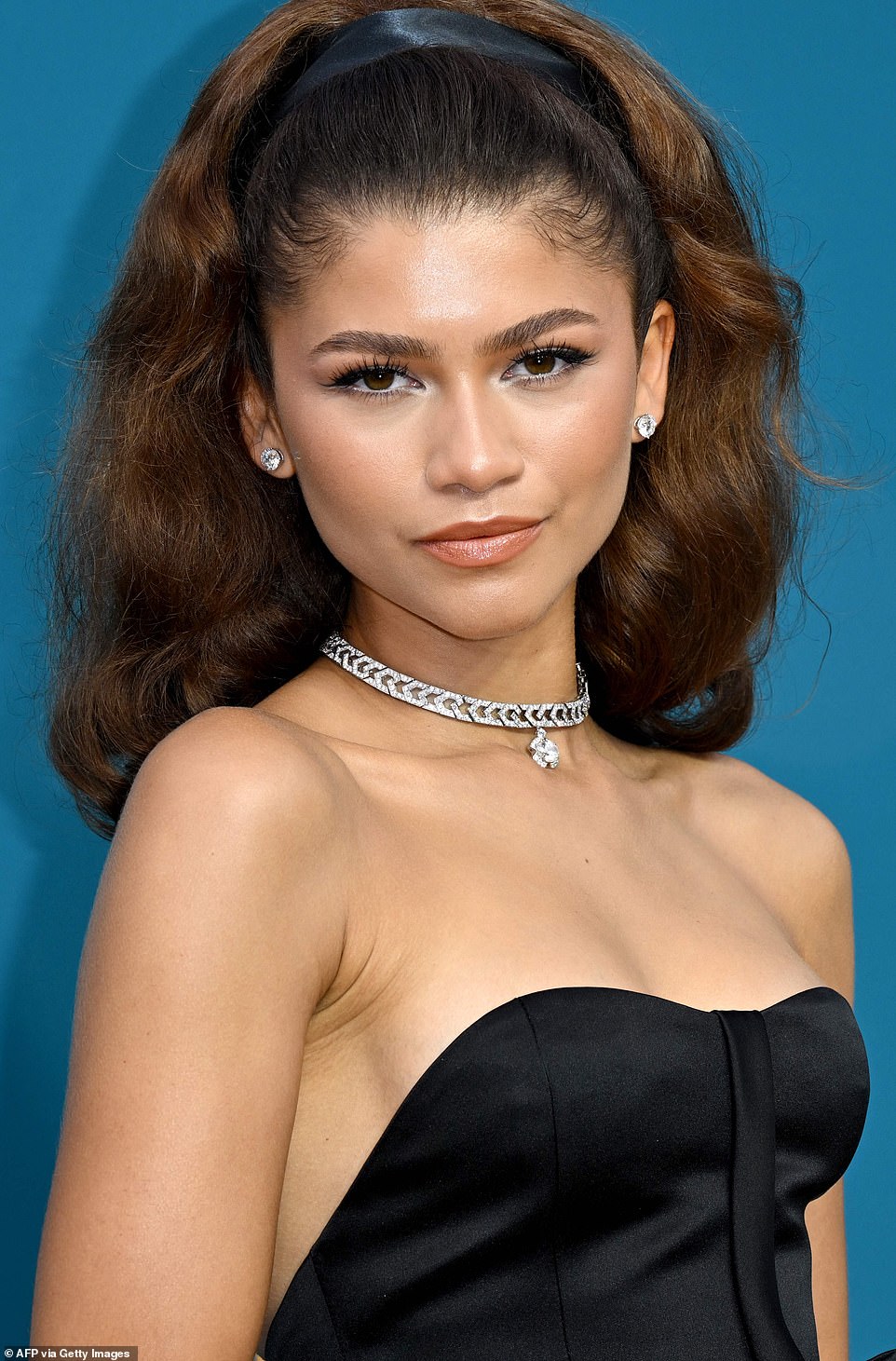 Also rocking a strapless number was actress Elle Fanning, who wowed in a black and blush colored strapless gown.

During her red carpet interview, Elle revealed that costumer designer Sharon Long, who works with her on the show The Great, designed and made the dress for her.

Amanda Seyfried chose a pink mesh gown featuring a sheer lace accent along the neckline; the Mean Girls star pulled her hair back into a chic low bun with pink lipstick on her pout. 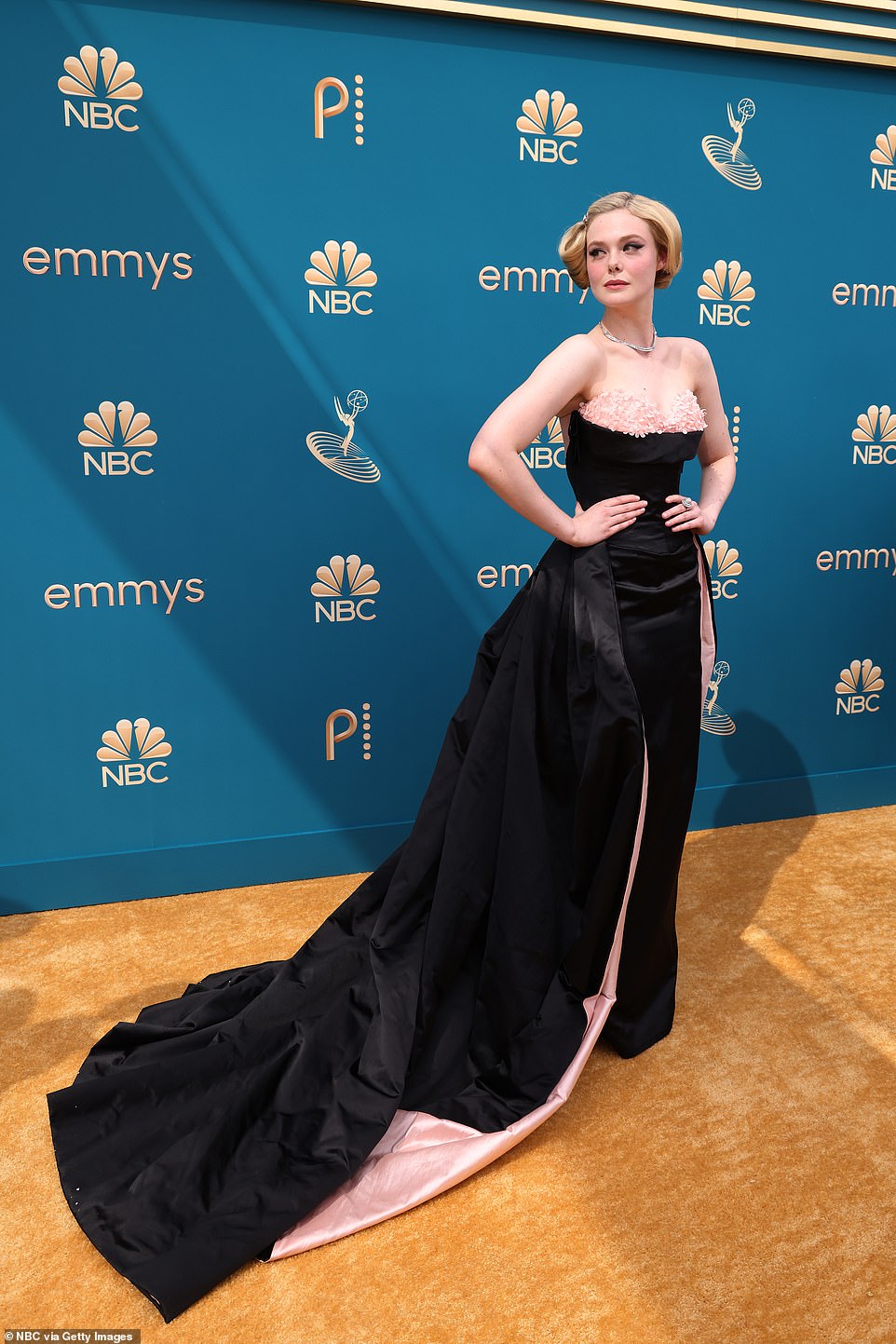 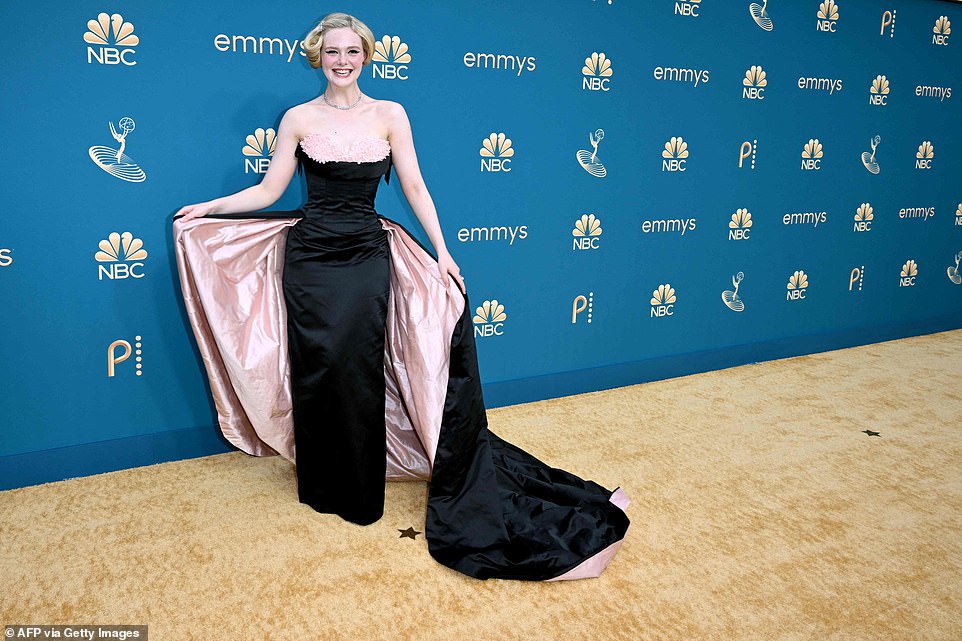 Stunning: Elle’s dress was a strapless dress with a ball skirt that started on the sides

Chrissy and husband John Legend, who announced her pregnancy in early August,sweetly posed together on the red carpet as he cradled her midsection. 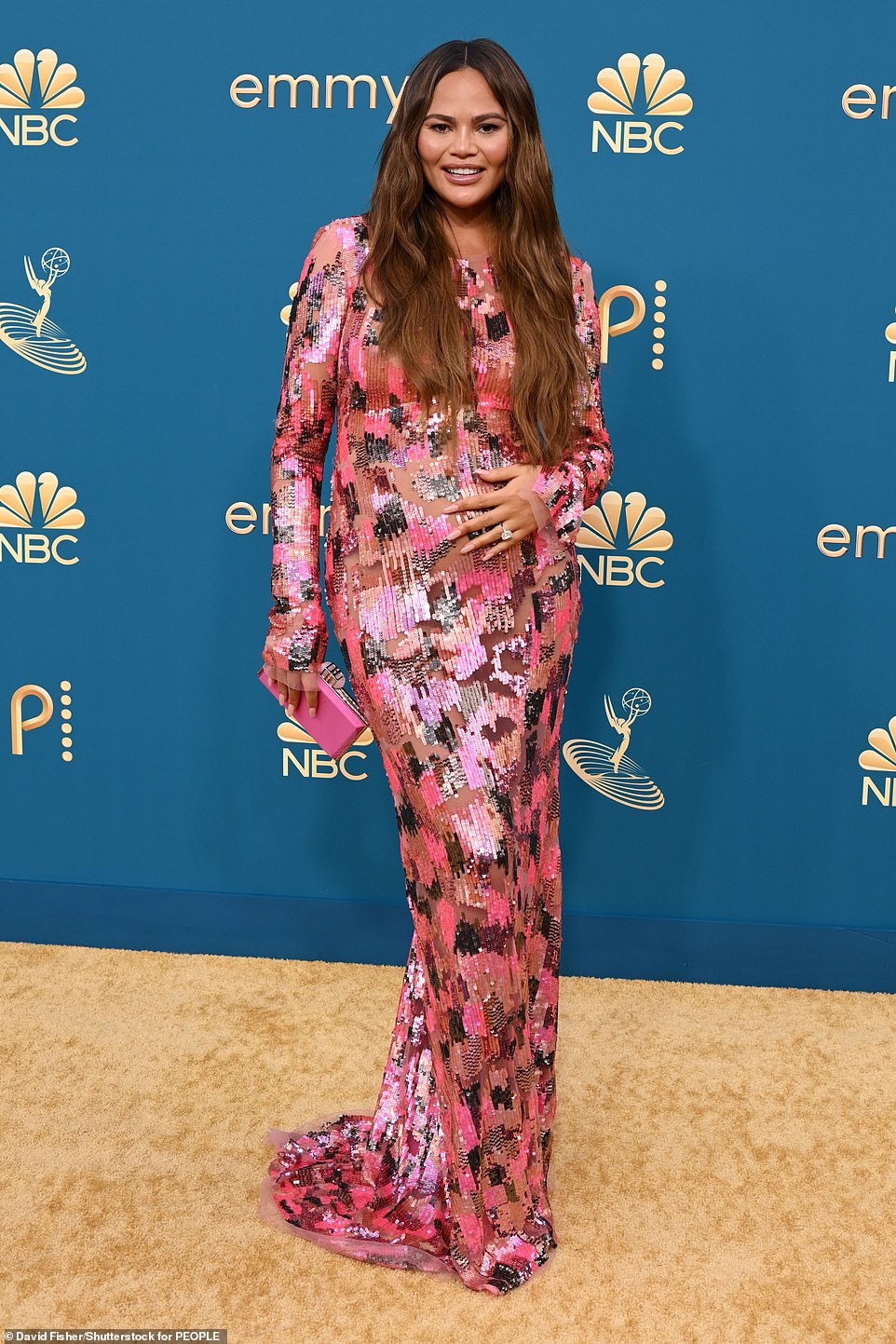 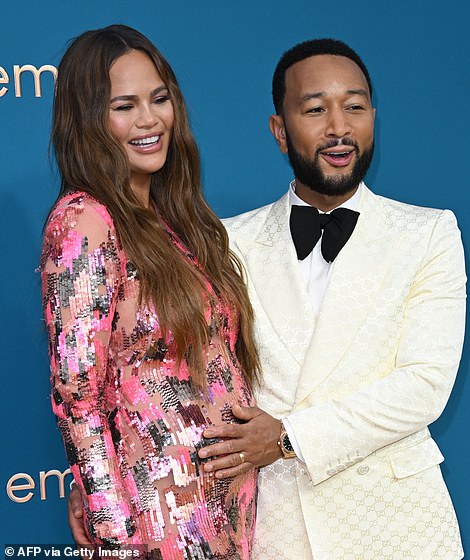 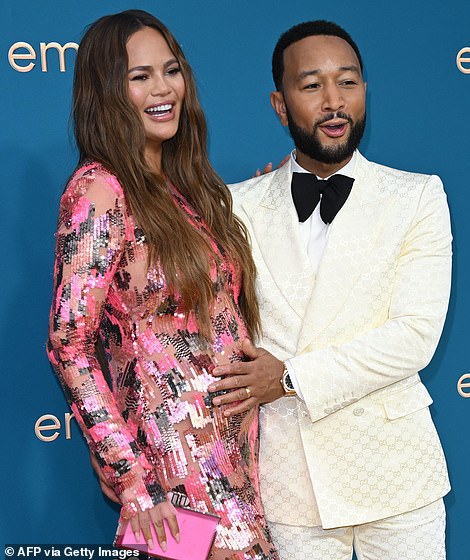 Kerry Washington sported a one-shoulder gown with flower embellishments along one shoulder and one hip; the dress had a thigh-grazing skirt with a train behind her.

The actress paired the chic frock with black tights and heels, adding a delicate diamond necklace and coordinating earrings.

Alexandra Daddario, 36, posed with her husband Andrew Form, 53; the couple made their red carpet debut as husband and wife at the Emmys on Monday.

They tied the knot in June 2022, almost one year after they got engaged. The lovebirds wed in New Orleans at Preservation Hall.

The actress looked lovely in a cream colored one-shoulder gown that had a sheer skirt, revealing shorts beneath; she wore her short hair sleek and loose around her with red lipstick on her pout. 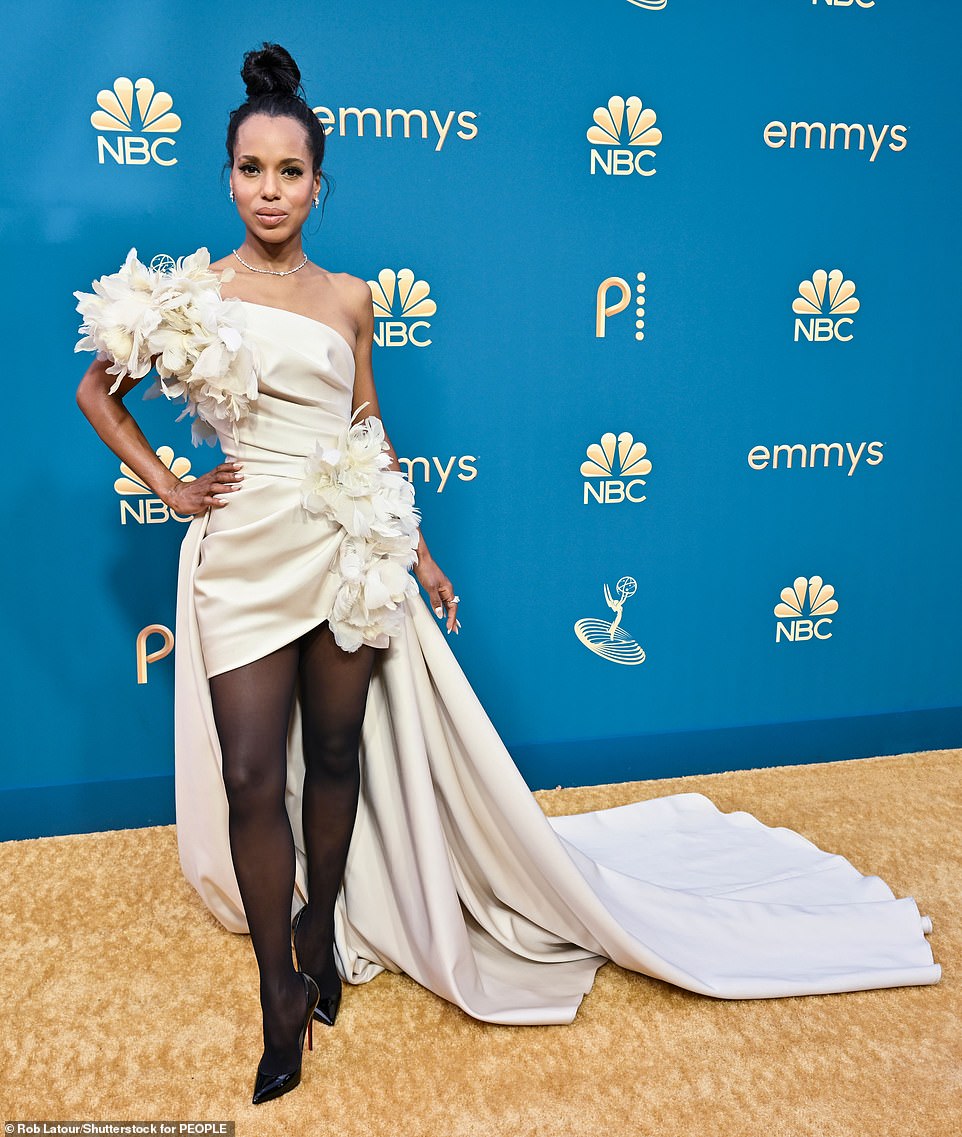 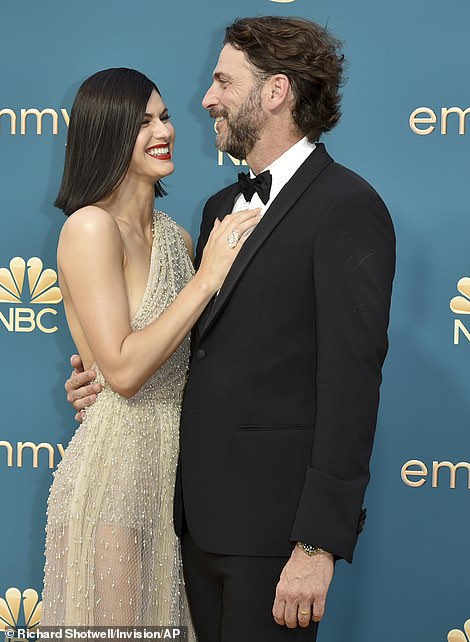 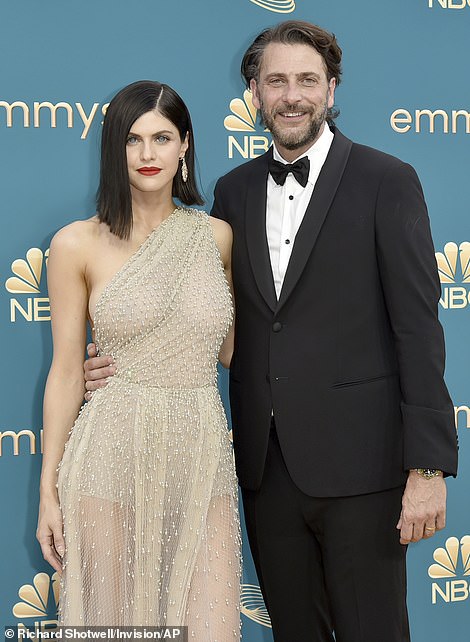 Newly weds: Alexandra Daddario posed with her husband Andrew Form; the couple made their red carpet debut as husband and wife at the Emmys

The long-sleeved frock had a large cut-out in the center of her dress, revealing her flat midriff; the actress wore her blonde hair in waves with smokey eye makeup.

Euphoria star Sydney Sweeney wowed in a black and white floral embellished gown that showcased her cleavage; she wore her short blonde hair loose and in waves. 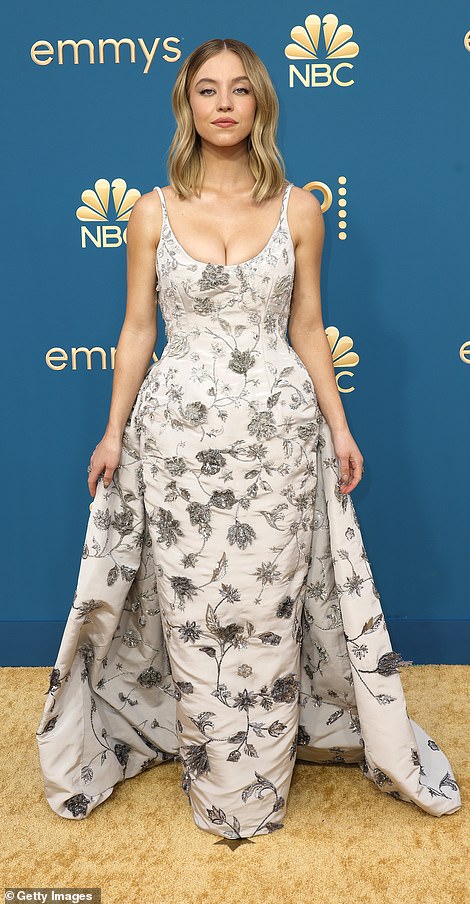 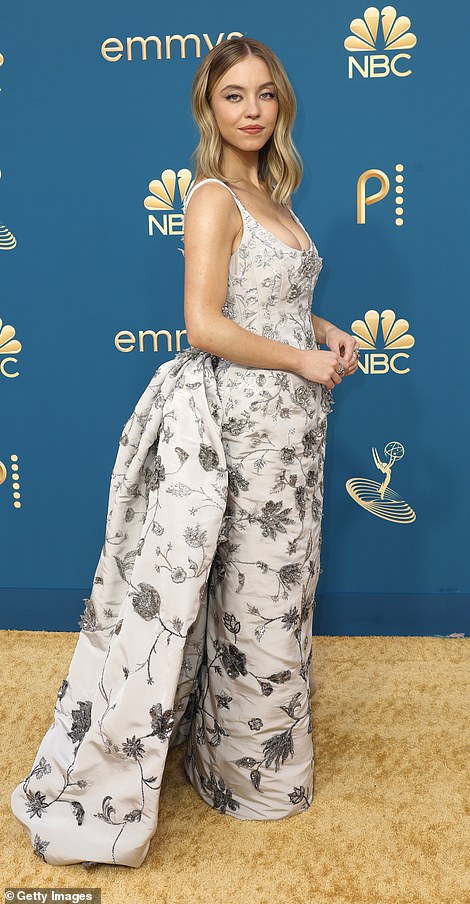 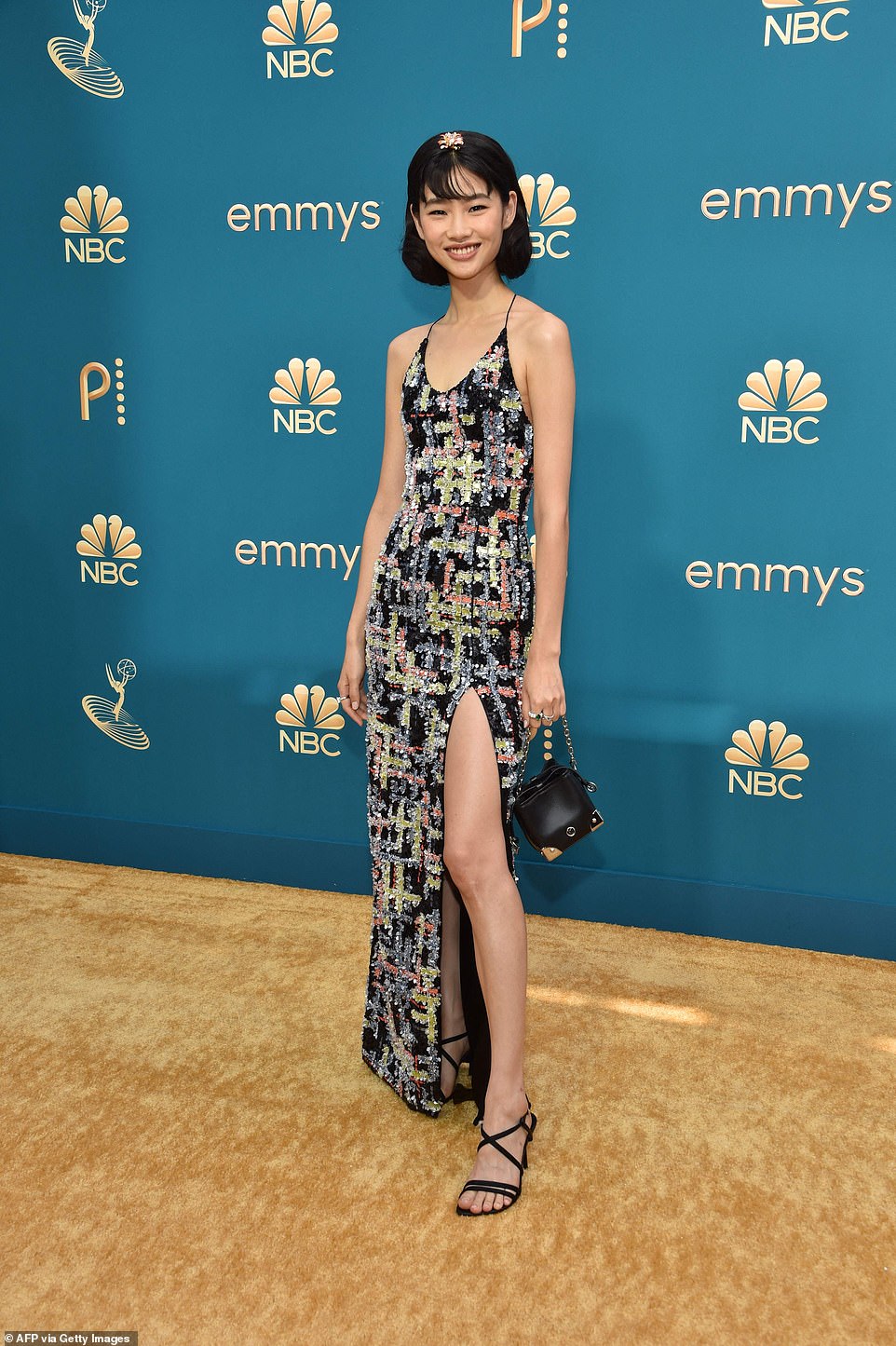 Rachel Brosnahan donned a plunging dark blue gown with metal and lace accents throughout while Sarah Paulson wore a deep purple crop top and skirt with a statement belt. 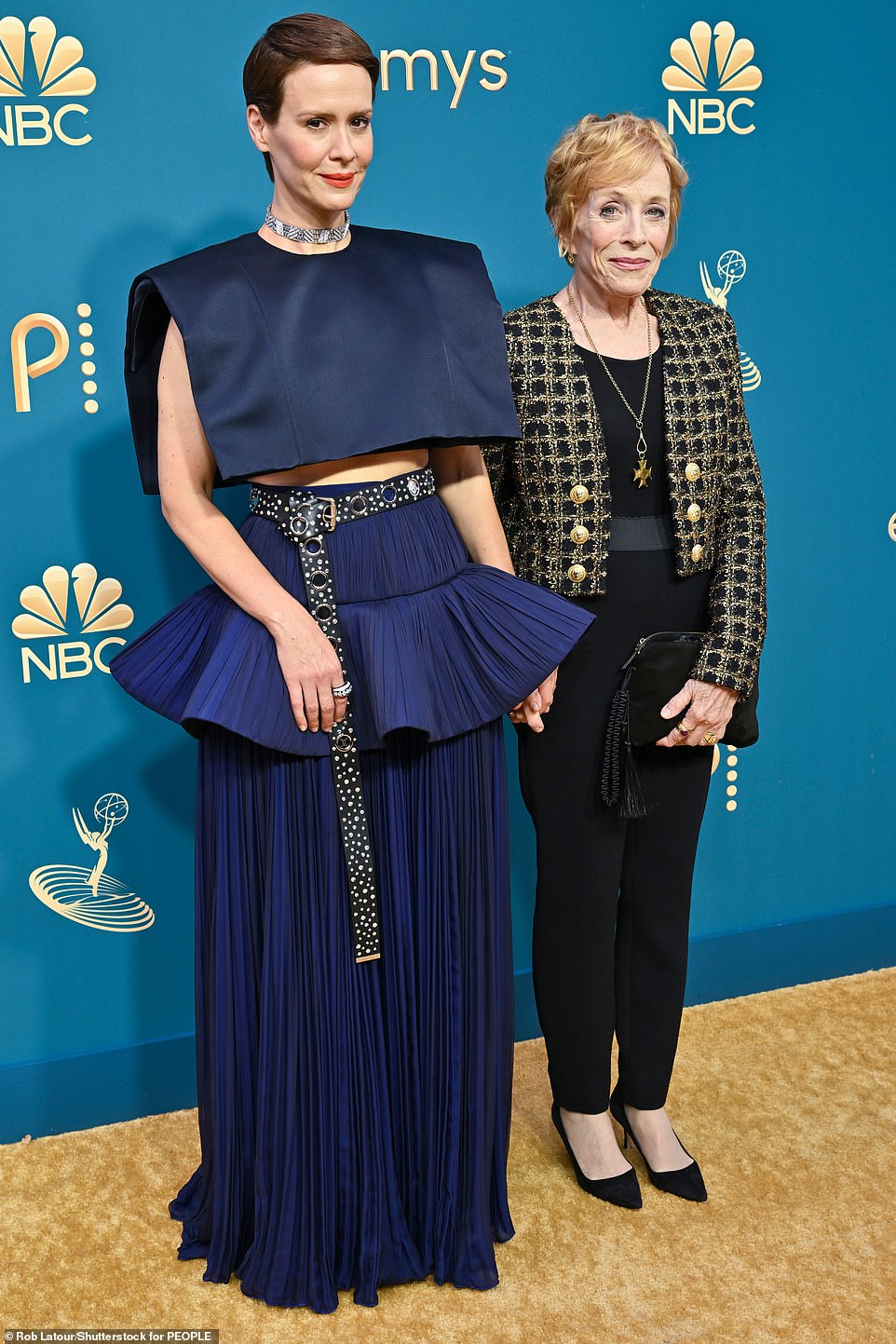 Saturday Night Live star Kenan Thompson took over hosting duties for the first time, and he promised that controversies such as Will Smith’s shocking slap of Chris Rock at the Academy Awards ‘won’t happen again’ under his watch.

‘Even if I am roasting [someone], it shouldn’t come across as any sort of malice,’ he told the Associated Press.

The 74th annual award show, which celebrates the best in television, has already awarded a number of honors at the Creative Arts Emmys ceremony.

The earlier ceremony, spread out over two nights on September 3 and 4, was dominated by scripted shows including The White Lotus, Euphoria and Stranger Things, along with unscripted fare like Adele’s One Night Only special.

The premium network is also poised for gold thanks to its limited series The White Lotus, which scored 20 nominations and already won five technical awards at the earlier ceremony.

Netflix’s hit South Korean series Squid Game, which made history as the first non-English language nominee in the Best Drama Series category, is once again nominated. 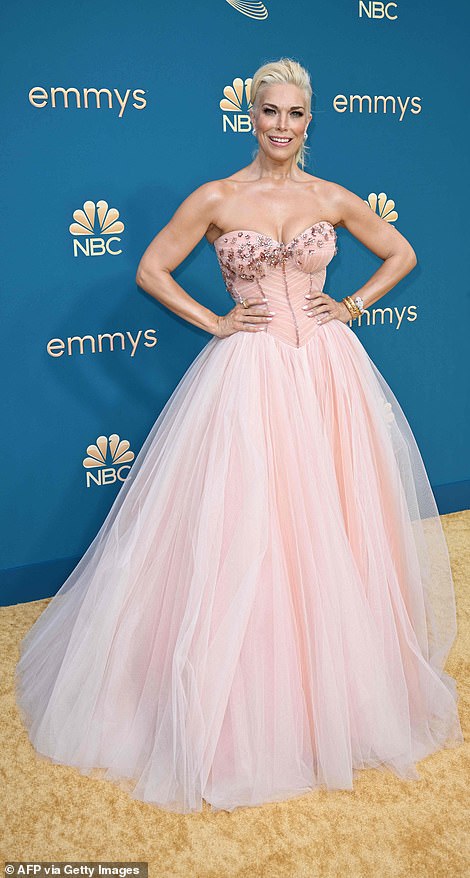 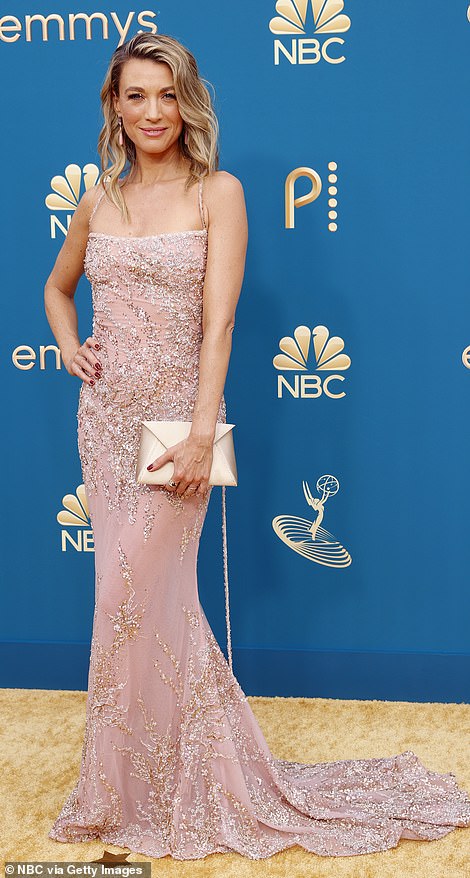 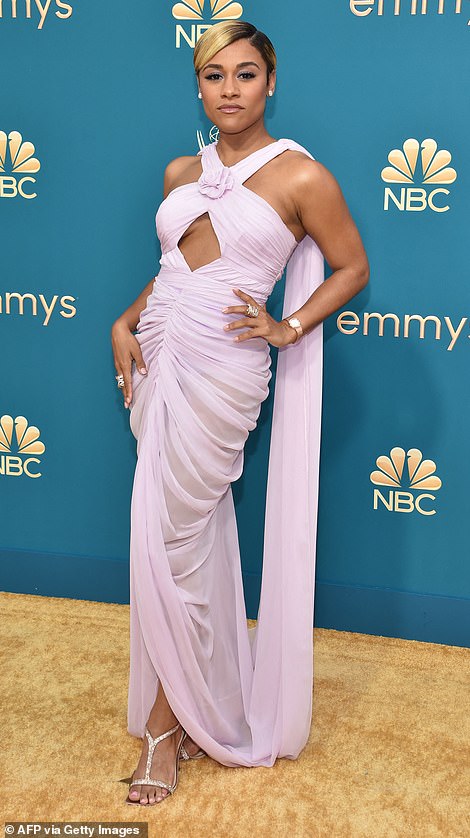 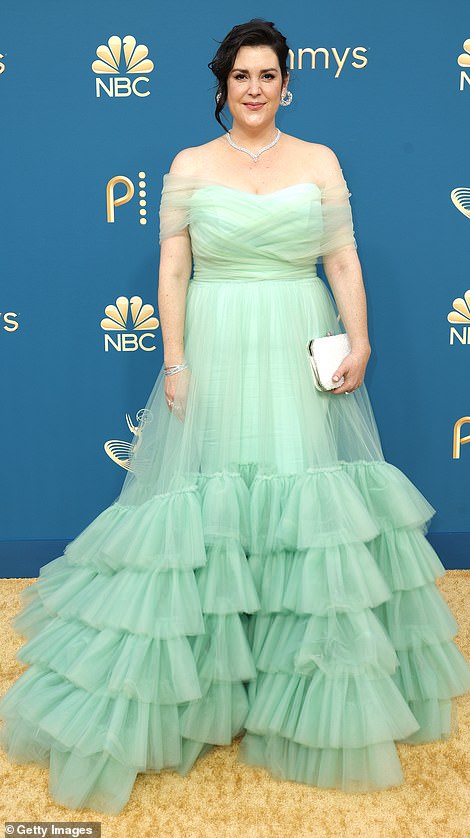 Pastel: Ariana DeBose chose a lavender hued gown that featured a cut-out detail in the center of her torso while Melanie Lynskey opted for a green number 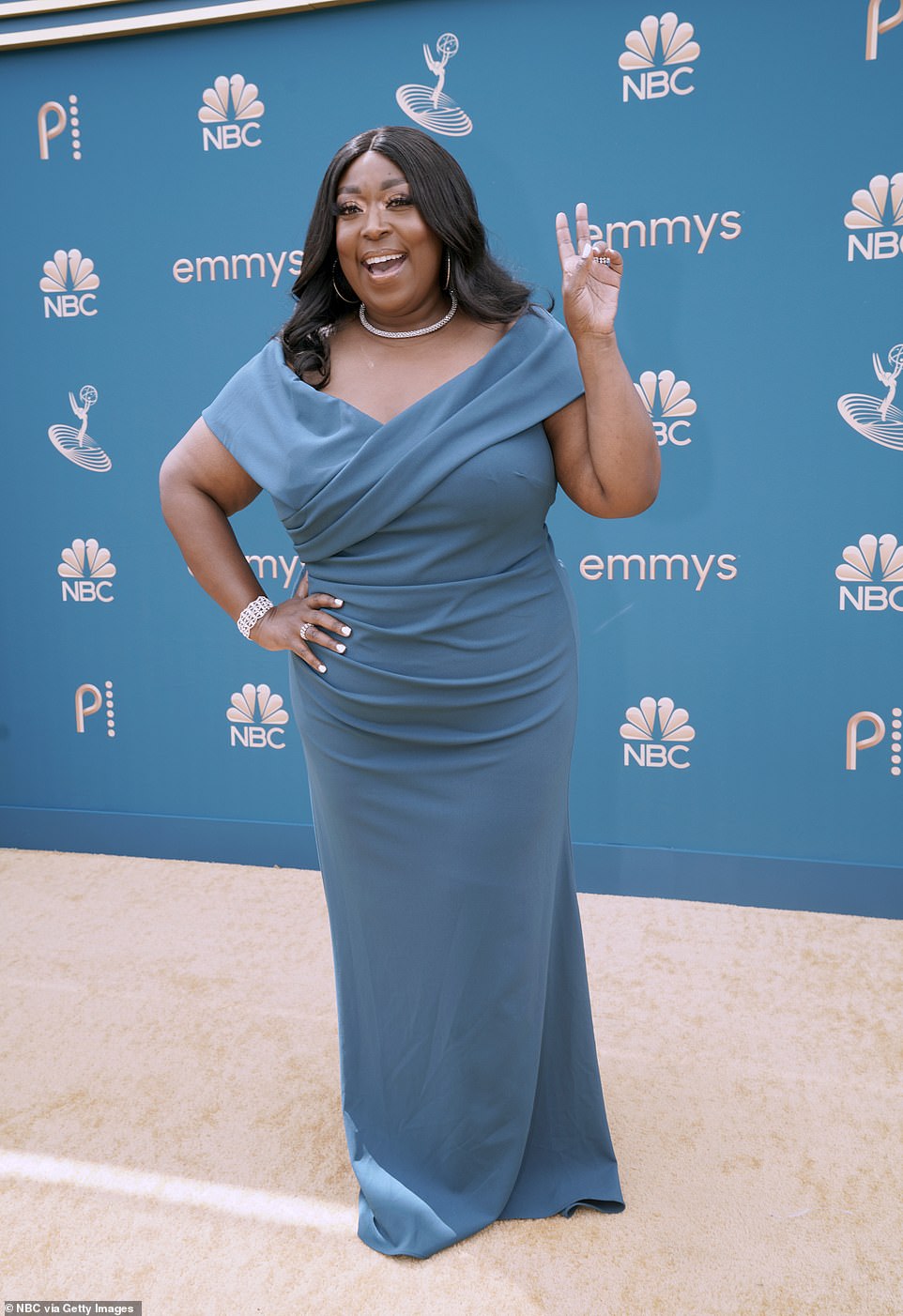 Apple TV+’s feel-good comedy Ted Lasso, which stars Jason Sudeikis, is also competing for an impressive 20 awards at the Emmys.

Among the presenters who have already been announced are Selena Gomez, who is up for the Best Comedy Series award as a producer of Only Murders In The Building, Kerry Washington and Squid Game’s stars Jung Ho-yeon, competing for Best Supporting Actress, and Lee Jung-jae, who is up for Best Actor.

Jimmy Kimmel and Seth Meyers will likely bring some of the comedy from their late-night shows to the Microsoft Theater, and Jean Smart, who plays an aging comedian on HBO Max’s Hacks, will be presenting along with her costar Hannah Einbinder.

After adopting a Golden Globes–like atmosphere at the 2021 ceremony, the Emmys will continue to seat nominees at tables close to the stage, though the larger venue will now allow more guests to sit in the rows of seats behind them.

Many of the Covid-related restrictions from last year’s event appear to have been dropped for the 2022 edition.

Viewers can catch the Emmy Awards at 8 p.m. ET/ 5 p.m. PT on both NBC and its streaming platform Peacock.

Only Murders in the Building (Hulu)

What We Do in the Shadows (FX)

Lead Actor in a Drama Series

Lead Actress in a Drama Series

Lead Actor in a Comedy Series

Steve Martin (Only Murders in the Building)

Martin Short (Only Murders in the Building)

Lead Actress in a Comedy Series

Lead Actor in a Limited Series or Movie

Andrew Garfield (Under the Banner of Heaven)

Oscar Isaac (Scenes From a Marriage)

Lead Actress in a Limited Series or Movie

Lizzo’s Watch Out for the Big Grrrls (Amazon Prime Video)

Supporting Actress in a Drama Series

Supporting Actor in a Drama Series

Supporting Actress in a Comedy Series

Supporting Actor in a Comedy Series

Supporting Actress in a Limited Series or Movie

Supporting Actor in a Limited Series or Movie