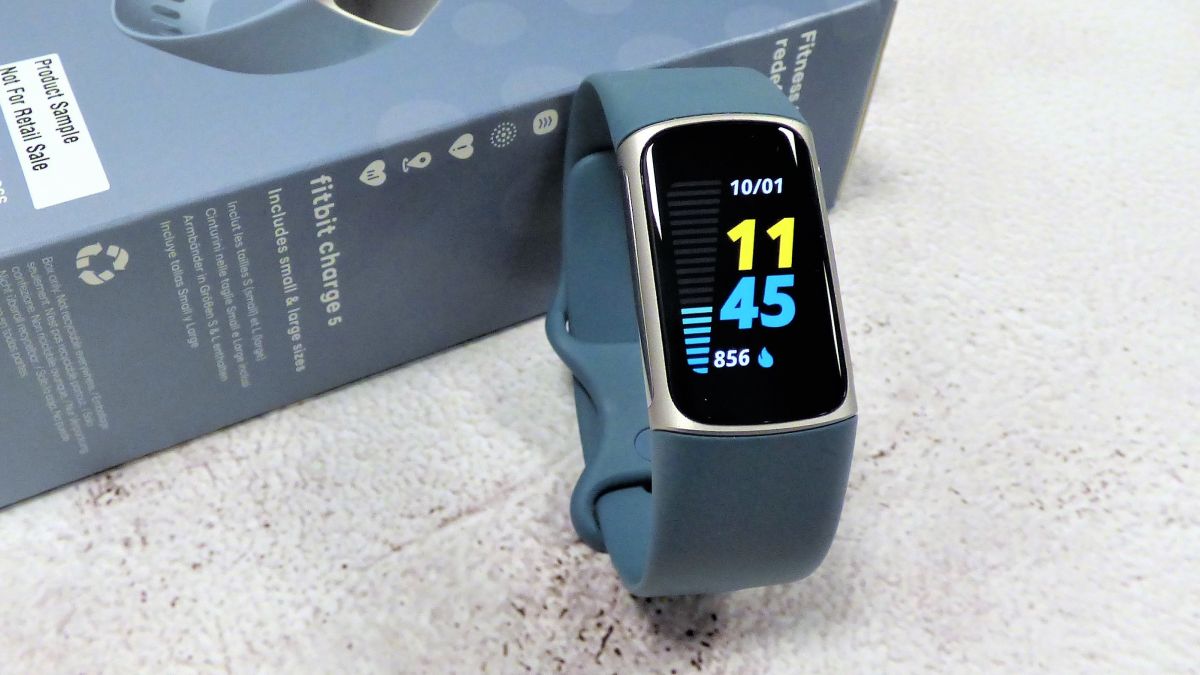 The Fitbit Charge 5 is a powerful fitness tracker that picks and mixes the best features from all of Fitbit’s other devices. It has the on-board GPS of the Fitbit Versa 3, the slim design and bright AMOLED screen of the Fitbit Luxe, and the stress-measuring app of the Fitbit Sense.

It’s a huge upgrade from the Charge 4, and if you’re starting to get serious about your workouts (whether that’s running, gym work, or a combination), it’s an excellent option. Its heart rate monitoring is particularly impressive, making it a good choice for anyone with an interest in HIIT or spinning.

When you’re not working out, you’ll benefit from smartphone notifications that can be read, opened on your phone, or dismissed with a quick tap, plus convenient call alerts so nothing important ends up going to voicemail. There are contactless payments through Fitbit Pay, and you’ll receive regular reminders to get up and stretch, and reflect on the previous day’s achievements.

It’s not quite perfect, though. The Daily Readiness Score (which will allow Fitbit Premium users to see their energy levels each morning and plan their day accordingly) wasn’t available at launch. Neither was the ECG app, which will let users check for signs of heart arrhythmia that should be investigated by a doctor. These issues will hopefully soon be resolved (hopefully before the six-month free trial of Fitbit Premium expires).

More disappointingly, the Charge 5 doesn’t offer any music playback functions. We’re not surprised that the watch doesn’t have any on-board storage for our tunes, but there’s no way to control your music at all. This is a shame, as the Charge 4 allowed wearers to control their Spotify playlist during workouts. Hopefully a future update will add a music app to the Charge 5’s otherwise impressive suite of features.

The Fitbit Charge 5 follows the same Biologic Industrial Design language as the Sense, Versa 3, and Inspire 2, with smooth lines ‘inspired by the human body’ and soft colors. It’s a big departure from the Charge 4, which had a much more angular design.

These are big changes, but the Charge 5’s most noticeable upgrade is its display. Rather than the monochrome memory-in-pixel screen of the Charge 4, the new watch has a full color AMOLED display, just like that of the Fitbit Luxe. It’s crisp and bright, with smooth scrolling and animations.

There’s an always-on option that makes it easier to see the screen at a glance, but we found in unnecessary in everyday use; unlike some fitness trackers we’ve tested, the Charge 5’s display woke reliably whenever we raised our wrist to check the time.

The Fitbit Charge 5 has no physical buttons, but there’s an oval sensor on each side of the case for the watch’s ECG and EDA apps. On the rear of the watch you’ll find the usual optical heart rate sensor, plus the contacts for the charger. This is identical to the charger used by the Fitbit Luxe, and attaches to the Charge 5 magnetically. Unfortunately for Macbook users, it uses a USB-A cable.

A fitness tracker works best when it’s worn every day, allowing it to build up a complete picture of your health, sleep and activity patterns, and Fitbit has pretty much nailed the formula. The Charge 5 isn’t just comfortable to wear and much more attractive than the Charge 4, it’s more useful as well, giving you plenty of reason to strap it on each morning.

The higher resolution color display means smartphone notifications are now much easier to read. You’ll see a small snippet of text when you receive an SMS, WhatsApp message or other alert, which you can tap to read, open on your phone, or dismiss. You can also accept or decline incoming calls with a quick tap of the screen – the interface is simple and intuitive.

We also appreciated that menstrual cycle tracking is readily accessible rather than tucked away under a series of sub-menus.

Like the Charge 4, the Charge 5 offers contactless payments through Fitbit Pay. This is well supported in the US, where it works with dozens of banks, but less so in the rest of the world. In the UK, for example, Google and Apple’s payment services are the two big players.

However, unlike the Charge 4, the Charge 5 offers no music tools. We wouldn’t expect a device as compact as this to offer storage for offline music playback, but the Charge 4 allowed you to control your Spotify playlist from your wrist, which was a great feature for workouts. We would at least have liked to be able to control our phone’s default music player – pausing and skipping between tracks as you can with devices like the Garmin Lily.

We found that the Charge 5 lasted around six days between charges with everyday use and sleep tracking, though battery life will be shortened significantly if you choose to use the screen’s always-on mode, or make extensive use of GPS.

The Fitbit Charge 5 can track 20 workout types, which is an impressive range. Many other devices claim to track 100 or more, but these numbers are inflated by modes that all work exactly the same way, tracking heart rate and time, but with different names.

The Charge 5’s menu can display five workout modes at a time. To change them, you’ll need to jump into the Fitbit mobile app, open the device’s settings, and make your adjustments there. You can also change the order in which the various workout types appear, so your favorite activity is easier to find.

To start tracking, swipe left on the screen twice, swipe up and down to choose an activity, then tap the screen once to begin. Tapping the screen mid-workout will allow you to switch between stats such as calories burned and distance travelled, and tapping twice will pause tracking. You’re unlikely to accidentally cancel an activity partway through, which is sometimes a concern when using a fitness tracker without physical buttons

The Charge 5 can start tracking runs, walks, bike rides and some gym workouts automatically. In our tests this worked well; it proved significantly more accurate than the Charge 4, which occasionally registered activities as elliptical training by mistake.

We were also pleased to see that the Charge 5 didn’t track steps during cycling activities, which is an issue we’ve faced with some other fitness trackers in recent years.

As with the Fitbit Luxe, we were very impressed by the accuracy of the Charge 5’s heart rate monitoring during workouts. The watch notifies you with a gentle buzz when you move between heart rate zones, and although it didn’t detect changes quite as quickly as a chest strap heart rate monitor, the difference was minimal.

GPS recordings weren’t quite as accurate as those from a dedicated running watch like the Garmin Forerunner 55, overestimating distance on our pre-measured route by a few meters, but if you’re a relatively new runner and aren’t aiming to shave seconds off your race times, that will be less of an issue.

It’s a shame that you can’t view more of your workout stats on-screen once you’ve finished exercising. You can see the duration of your session, calorie count, and stats such as laps completed (if appropriate), but for more in-depth data you’ll need to delve into the smartphone app.

When Fitbit announced the Fitbit Charge 5 in September 2021, the company also revealed a new feature for Fitbit Premium users, which will help you manage your energy levels and plan your day accordingly. The Readiness score is based on your activity levels, heart rate variability and sleep patterns, and gives not just a numerical value to indicate whether you’re well rested.

If the number is high, the Fitbit mobile app will suggest some workouts you can try to make the most of your day. If your readiness score is low, the app will offer some calming activities like yoga so you can keep moving, but avoid tiring yourself out.

When we tested the Fitbit Charge 5 in September 2021, the Readiness score wasn’t yet available, and the Fitbit app advised us to wait for an update in the coming months. We’ll update this review accordingly once we’ve had an opportunity to test it. Hopefully this will be sooner rather than later, so users will be able to benefit before their six-month free trial of Fitbit Premium expires.

At the time of testing the ECG app wasn’t yet available either, but you won’t need Fitbit Premium membership to use this.  We were, however, able to test the Charge 5’s stress-monitoring feature, which has been carried over from the Fitbit Sense. This measures changes in the electrical conductivity of your skin, which is affected by adrenal activity. The more electrodermal activity (EDA) responses are measured during a test, the higher your stress levels.

To take an EDA reading, swipe left to find the menu option, tap to select it, and place your forefinger and thumb on the sensors on the edges of the case. You’ll be instructed to sit still for three minutes, after which the Charge 5 will vibrate to let you know the scan is complete. You’ll be prompted to select an emoji to reflect how you’re currently feeling, and within the Fitbit app you’ll be able to add reflections.

EDA scores can be affected by physical as well as emotional stress, but encouraging you to sit calmly and quietly helps mitigate this, and prompting you to add subjective feelings and reflections helps built up a more complete picture of your emotional state over time and make connections between events and stress levels.

We found it interesting, however, that the Charge 5 doesn’t offer guided breathing exercises. This is something we’ve come to expect from most modern fitness trackers – though there are lots of meditation and mindfulness sessions available through the Fitbit mobile app.

Sleep tracking measurements were largely in line with those from the Oura smart ring (our current top-rated sleep tracker), though the Charge 5 sometimes began tracking sleep when we were settling down for the night, but hadn’t yet nodded off. This is something we’ve found with most wrist-based fitness trackers, which can’t track changes in heart rate quite as accurately as a device worn on the finger where blood vessels are closer to the surface.

You’re getting into running
Each Fitbit device has a distinct niche, and the Charge 5 is aimed squarely at people who enjoy getting their heart rate up. Although not as feature-rich as a dedicated running watch, it’s easy to recommend to anyone who’s starting to take working out seriously and wants a way to track their pace and distance with a good level of accuracy.

You enjoy spinning
Many fitness trackers only offer a general ‘indoor cycling’ mode. but the Charge 5 has a dedicated setting for spin sessions, which alerts you as you move between heart rate zones. The heart rate sensor is accurate and responsive, making the Charge 5 a great training tool.

Don’t buy it if

You’re on a tight budget
The Fitbit Charge 5 gives you a lot for your money, but if cash is tight then it’s worth investigating more affordable options like the Amazfit Bip, which also packs on-board GPS and a superb screen.

You rely on music for motivation
We appreciated the Charge 4’s Spotify integration, which allowed us to control playlists from our wrist. This option has been dropped for the Charge 5, which is a pity, and you can’t use it to control your phone’s default music player either.