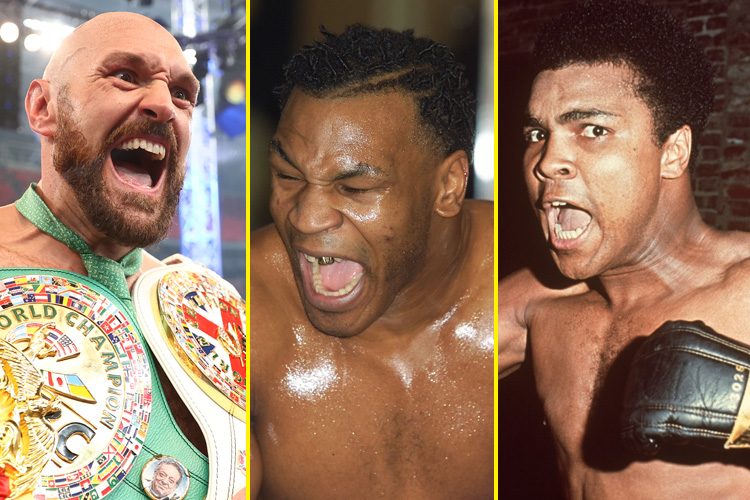 Trash talk, insults, pre-fight hype: we’re supposed to disapprove when it goes too far, but boxing fans revel in it – and these 10 fighters are the masters.

There’s only one major contender who could make this list but doesn’t: Conor McGregor. Undoubtedly a world-class smack-talker – and a man who gave us a terrific mountain of trash before his only boxing bout in 2017. But we can’t really count an MMA fighter with an 0-1 boxing record as a genuine pugilist just yet. Now, let’s go through this top 10 like a laxative.

The man who said he wanted to ‘violate’ Audley Harrison and claimed he was watching ‘DVDs of King Kong, Godzilla and Frankenstein’ when preparing for poor Nicolai Valuev was always happy to run his mouth in the name of PR.

The handsome Hayemaker did it with a glint in his eye, although by the end even he seemed a bit tired of his shtick. Still, peak Haye was one of the best, including (if clothing counts as trash talk) wearing a T-shirt of him holding up the severed heads of the Klitschko brothers. Classic.

Quote: “Valuev looks like the bogeyman. Kids try to remove his mask when he goes trick-or-treating on Halloween.”

The self-proclaimed ‘GWOAT’ (greatest woman of all time) has never been shy of hailing her brilliance. But it’s a special effort that Shields has drawn such a heated response from the usually mild-mannered Savannah Marshall.


Eubank Jr vs Benn is ‘absolutely ON’, despite pull-out demand from Eubank Sr

While the pair have been waging verbal warfare before their enticing middleweight showdown, Claressa still found time to inform Jake Paul that she could beat him up with one hand. Whoever wins out of Shields vs Marshall, the American will at least keep hold of her crown as the elite smack-talker in women’s boxing.

Quote: “[Marshall] said if she walked around calling herself the GWOAT that her friends would slap her. As they should. You have one belt.”

Plenty of boxers fire off pre-fight boasts and insults with tongue firmly in cheek. What made James ‘Lights Out’ Toney so effective was his menacing, deadly serious delivery.

The brilliant, ill-disciplined, hot-headed Michigan native had beef with pretty much everyone he stepped into the ring with – and even those he didn’t, as he found time to threaten Bernard Hopkins, Nigel Benn, Chris Eubank and a host of others. Just not the happy-go-lucky type.

Quote: “They can all get some. I don’t care if you’re a flyweight or your-mamma-weight. I will kick your a**.”

If ‘The Executioner’ was even better at boxing than one thing, it was – and is – talking. The retired middleweight great is the kind of man who could start an hour-long argument in an empty room, but fortunately for empty rooms he chose to focus on his opponents instead.

Sometimes he took things too far, throwing down a Puerto Rican flag (almost causing a riot in San Juan) or telling Joe Calzaghe that he’d ‘never lose to a white boy’. But overall Hopkins’ lengthy invective was superbly entertaining – dare we say, often more so than his fights.

Quote: “You bitched. You ran. You didn’t fight. And from the fifth round to the 12th round, I was on your ass and you was ready to quit… you went to your corner like a rag doll, done, defeated, and knew that you lost that fight. That’s how gangster I am.”

One of the originators of talking smack, the first black heavyweight champion had a wit to match his special talent. Once paid a $50 speeding fine with a $100 bill, casually telling the police officer to keep the change ‘because I’ll be going at the same speed on the way back’.

However, Johnson was in his element inside the ring, where he would often taunt and goad his foes during lengthy contests, including in his title win against the undersized Tommy Burns (see below) or in his ‘fight of the century’ against Jim Jeffries in 1910.

Quote: “Poor little Tommy. Did your mother teach you to punch like that?”

Tyson’s flamethrower mouth made him as explosive with a microphone as he was in the ring. From sneering at his rivals’ ‘primitive skills’ to saying he wanted to catch an opponent ‘right on the tip of his nose, because I try to punch the bone into the brain’ Tyson was usually NSFW.

His combination of lisp, death stare and lacerating tongue made for a compelling package. Tyson could also be incredibly generous about opponents and humble in defeat. But let’s face it, it was always more box office when he was threatening to eat Lennox Lewis’s unborn kids.

Quote: “My power is discombobulatingly devastating. I could feel his muscle tissues collapse under my force. It’s ludicrous these mortals even attempt to enter my realm.”

Hilarious, contradictory, insulting or insightful – you can never be sure what Fury is going to come out of the Gypsy King’s mouth. Deontay Wilder got so wary of Fury’s incessant pre-fight mind games, he wisely refused to even talk to his rival before their third bout.

Once dressed as Batman for a press conference with a baffled Wladimir Klitschko, leaping up to capture the Joker. Yet it’s Fury who usually plays the prankster, introducing American audiences to the word ‘dosser’ and himself at a press conference in Germany with: ‘Ich bin Tyson Fury, der Sexymeister from Great Britain’. Genius.

Quote: “You have about as much charisma as my underpants – zero, none. You’re a sports psychologist, you speak 37 different languages, so what? You’re still a robotic person.”

Mayweather can be crude, he can be thin-skinned, he can be objectionable (see some of his comments about Manny Pacquiao before they fought) – but he’s undoubtedly a master at promotional hype and getting under an opponent’s skin.

Created the ‘Money’ persona before his fight with Oscar De La Hoya and audiences lapped up the brash, cash-flaunting villain. Feuded with everyone from Shane Mosley to Ricky Hatton; 50 Cent to 80-year-old Larry Merchant. But as Floyd says: “I’m the best at talking trash I’m also the best at going out there and backing it up.”

The chain-smoking, hard-punching Nicaraguan brought pre-fight insults to WWE levels. However cartoonish he might have seemed, Felix Trinidad, De La Hoya and Miguel Cotto were all deeply unamused – especially as he had a knack for disparaging their families.

His press conferences were so heated you wondered if the fight would even make it to the ring or be settled right there. ‘El Matador’ was far from the most gifted fighter in boxing, but he definitely extended his run at the top by being the sport’s no.1 troll.

Quote: “Your wife is going to be frying me eggs tomorrow in Nicaragua, while you are in intensive care crying for her.”

Nicknamed the ‘Louisville Lip’ early on, the boxer who’d later become known as ‘The Greatest’ originally borrowed his over-the-top boasts and pre-fight predictions from a wrestler, Gorgeous George. However the poetry and showmanship was a style all of his own.

Ali created a nickname for every opponent – Sonny Liston was the ‘big ugly bear’, George Chuvalo was ‘the washerwoman’, George Foreman ‘the mummy’ and so on – but his nuclear levels of charm and charisma usually took the edge off his insults. He could be funny, incisive, sometimes cruel. But Ali was undisputedly the best talker boxing has ever seen.

Quote: ‘If you even dream of beating me you’d better wake up and apologise.”