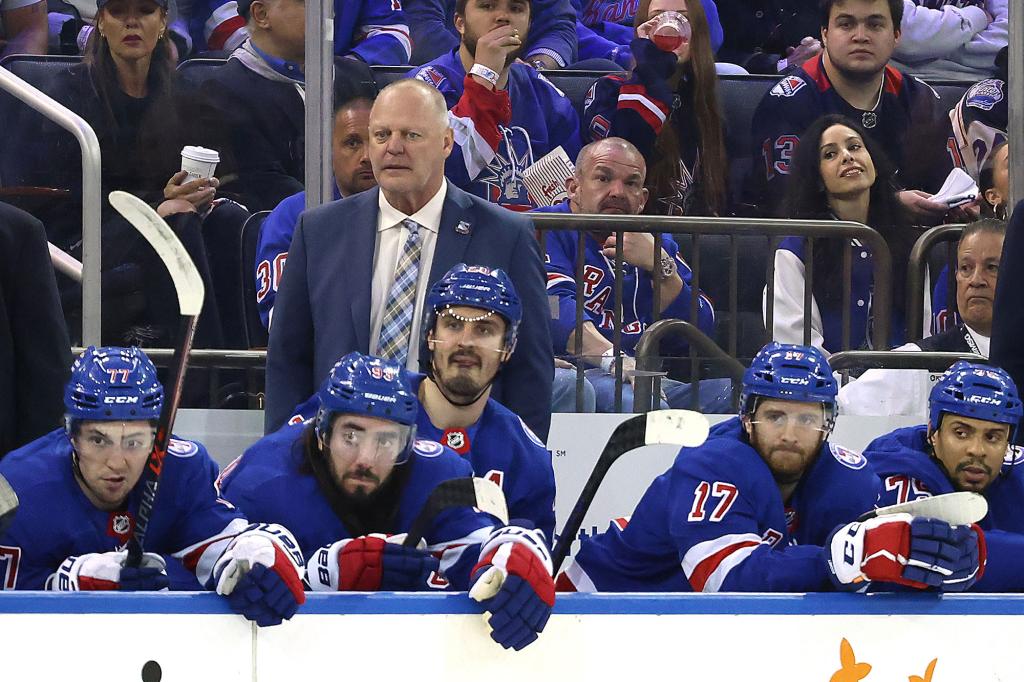 Read the expert take on the Blueshirts

Sign up for Larry Brooks’ Inside the Rangers, a weekly Sports+ exclusive.

Keep this in mind as the opener looms Tuesday night at the Garden against the Lightning — it is not how a team starts, but how it finishes.

Think back to last year, when the Blueshirts pretty much stunk up the joint in D.C., losing Gerard Gallant’s debut behind the bench to the Caps 5-1 in the, all together now, Tom Wilson Revenge Game.

As good an example as that may be, there’s an even better one that comes to mind from 20 years ago, when the Rangers defeated the Hurricanes 4-1 in Bryan Trottier’s coaching debut at the start of the 2002-03 season.

Whoo boy, the good times were about to roll after five straight seasons out of the playoffs.

Oh no, they were not.

That victory represented just one of of 21 Trottier recorded before being dismissed after 54 games, the Rangers wallowing at 21-26-6-1 on Jan. 29 and on their way to a sixth straight playoff miss. (Overtime games could still end in ties, so the four column ledger indicated wins, regulation losses, ties and OT losses.)

So good or bad, Game 1 is not dispositive. Of that, I am positive.

The (potentially) high cost of getting injured

The upper body injury Sammy Blais sustained on a hit from Alexander Romanov in Saturday’s final exhibition match against the Islanders is expected to sideline him for at least the opener.

It represents at least a momentary setback for the 26-year-old winger, who had spent the previous 10 months rehabbing following the Nov. 15 season-ending knee injury he sustained that required surgery.

But it also complicates the Rangers’ cap situation, at least momentarily. Because with the team set to embark on a trip for a back-to-back in Minnesota and Winnipeg on Thursday and Friday following Wednesday’s practice, the club is carrying one healthy spare forward in addition to Blais.

That means that both Jimmy Vesey, who signed a $750,000, one-year deal on Sunday after making a positive impression during camp on a Professional Tryout, and Dryden Hunt, who plays a grinding, physical game in Blais’ mold, are on the 23-man roster. That is one more forward than the Blueshirts can accommodate.

Under this scenario, the Rangers will enter the season with approximately $183,500 in available cap space rather than the approximate $946,000 they’d have by shedding Hunt and getting down to a 22-man roster. Yes, the numbers would be about the same if the club were to waive Vesey, but it seems unlikely the team would have signed him if that were the plan.

Opening cap space amounting to $946,000 would translate to $4,398,900 at the deadline. Even at that number, the team would have to find another $1.2M in space to accommodate Patrick Kane at 50 percent of his $10.5M cap hit. Every day the Rangers carry 23 adds further complications. If the 23-man roster remains intact for five days, the Blueshirts would project to have about $830,500 at the deadline.

Once Blais is cleared, there is no time to waste.

Patience is a virtue

Speaking of forwards, I’m fine with Vitali Kravtsov starting in the top-six with Artemi Panarin and Vincent Trocheck. The Rangers need to give the 22-year-old his best opportunity to succeed in that role. They will need to be patient. They also need to know if he can do the job.

If the plan was to reinsert No. 74 onto that line, though, I’m not sure why Kravtsov was scratched for the last exhibition game while working with the fifth line in practice for a handful of days. My best guess is that the hierarchy believed that Kravtsov would benefit from getting a breath.

If Julien Gauthier — he of the 54 healthy scratches in 138 games the last two seasons (39 percent of the time, that is) and an NHL career total of five goals in 93 contests and a 4.3 shooting percentage — can somehow find a scoring touch in Hartford, then clearing waivers would ultimately represent a positive outcome for both the 24-year-old winger and the Rangers.

Gauthier presumably will take a top-six spot for the Wolf Pack in his first extended minor league stay since he went 26-11 in 44 games for Carolina’s AHL Charlotte affiliate in 2019-20. That preceded his trade to the Rangers for Joey Keane in advance of the ’20 deadline.

Zac Jones has earned first crack at the left side spot on the third pair across from Braden Schneider off a strong camp. I don’t, however, understand why Jones wouldn’t be on the second power play unit when quarterbacking the PP is his forte.

Instead, Kravtsov is on the flank, joining Alexis Lafreniere (as the net-front guy), Filip Chytil. Kaapo Kakko and Jacob Trouba (at the top).

Libor Hajek once again opens as the seventh defenseman following a season in which he was a healthy scratch in 60 of the 77 games he was on the Rangers’ roster, with five matches in Hartford for conditioning.

If Jones locks down that spot, I would expect the hierarchy to do right by Hajek and make the 24-year-old defenseman available either through a trade or by placing him on waivers.

Sometimes, even in pro sports, fair is fair.