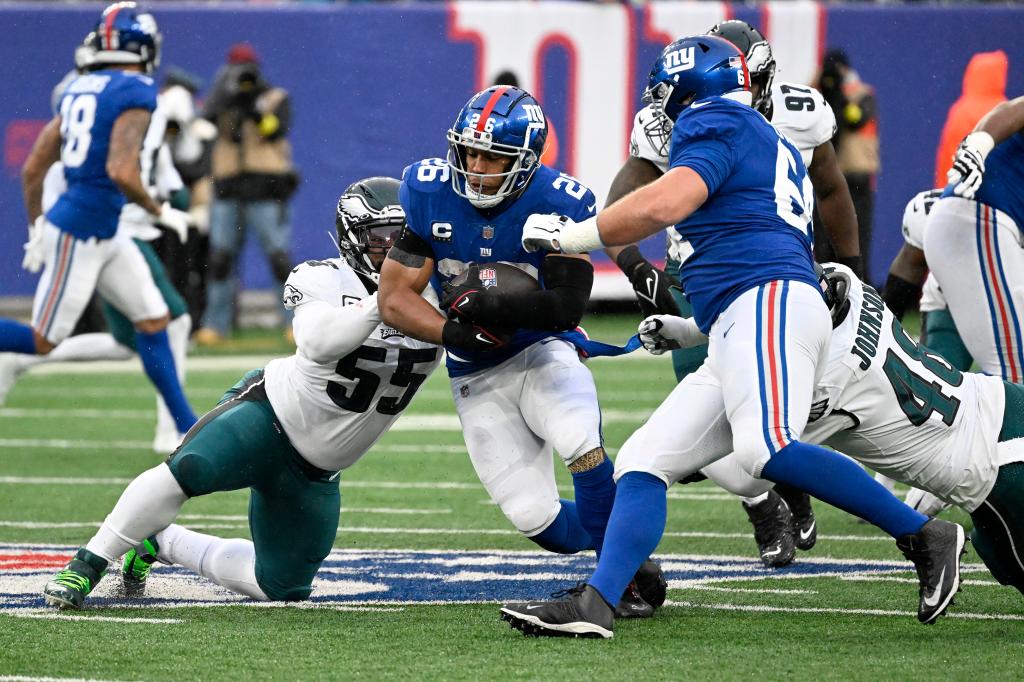 It turns out that the Giants were out of Sunday’s blowout loss even earlier than it looked.

The outcome could have been determined Wednesday, when Saquon Barkley injured his neck during practice. Barkley revealed that he suffered a stinger, which was the reason that he was listed as questionable on the final injury report of the week and treated as a game-time decision entering Sunday’s 48-22 loss to the Eagles at MetLife Stadium.

“I wasn’t limited,” Barkley said after playing 20 snaps and rushing nine times for 28 yards. “I think it was part of just the game plan. Obviously, we got down. I know that we were willing to get the rotation going. I was limited [in practice] all week but was able to pass the tests and get out there.”

The running back, who underwent a late-week MRI exam, pushed to get in the lineup when the Giants called it a 50/50 chance for him to play as he arrived at the stadium for early treatment.

Daboll previously said Barkley’s injury did not stem from practice.

“It kind of was up to the last minute with the neck, and the only thing I did was just continue to rehab it all week and trust the doctors and the trainers,” Barkley said. “They kept telling me if it keeps getting better, I’ll get a shot. I woke up [Sunday] morning and I felt like I was ready to go, and the doctor agreed with me.”

Barkley is averaging just 3.3 yards per carry during the Giants’ playoff-spot-endangering 1-4-1 six-game stretch. He still accounts for 30 percent of the offense’s total yardage through 13 games.

“Sa is a leader and he wants to win,” left tackle Andrew Thomas said. “He’s a big part of our offense and if we can’t get him going, it’s going to be tough. We have to do a better job creating run lanes.”

The sight of a helmet-less Barkley wrapped in a winter coat on the sideline to start the fourth quarter was the earliest sign of admitting defeat. He put to rest the concerns it raised that he might have worsened the injury by playing and jeopardized his availability for next week’s virtual must-win game by saying there is “no doubt” he will play at the Commanders.

“Came out of the game pretty well,” Barkley said. “I’m obviously disappointed in the outcome, but should be good.”

Barkley said the injury happened when he spun after catching a pass and “something just flared in my neck.”

“I would love to have played more,” Barkley said, “but I look forward to the next opportunity, and I’m probably sure I will have more of a bigger role than this game.”

Barkley couldn’t say for certain if the neck injury is related to the banged-up right shoulder he has dealt with since Week 5. Eagles defensive tackle Fletcher Cox landed hard on Barkley’s shoulder during the third quarter Sunday, which forced him to the sideline, where he tested his range of motion and returned after a few plays.

“Someone ran on it,” Barkley said, “but I think it was flat, so it wasn’t like anything crazy.”