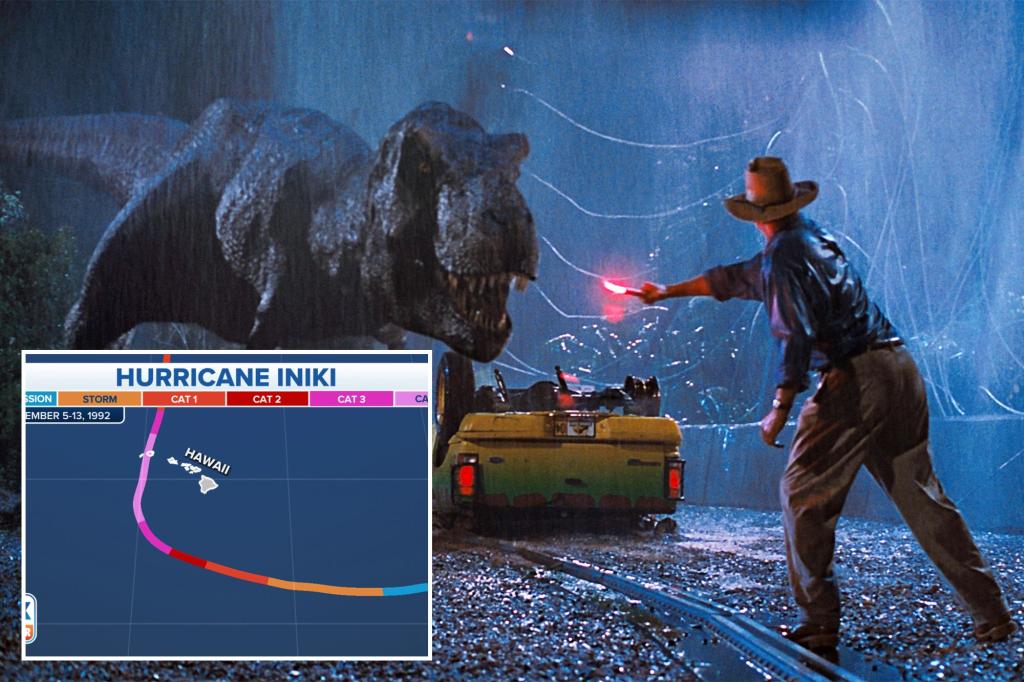 LIHUE, Hawaii – The island of Kauai is known for its untouched, natural beauty, but 30 years ago, the most destructive storm in Hawaii’s history, Hurricane Iniki, ravaged the island with 145 mph winds catching many residents and tourists off-guard.

On September 11, 1992, the small but intense system came out of the south in the central Pacific and traveled directly over the island.

Hurricane strikes on the fiftieth state are rare, but a major hit is even more extreme. Data from the National Ocean and Atmospheric Administration show only four major hurricanes with winds of at least 115 mph passing within 50 miles of the 137 Hawaiian Islands.

Without a plethora of media sources, many tourists on the island didn’t know about the impending disaster, including a man named Steven Spielberg.

The director was with his cast and crew on the island filming, what would become one of the highest-grossing movies of all time, Jurassic Park.

“The night before, I was on the Valley House set thanking Steven Spielberg for filming here. Not knowing that he had not been told yet about the impending hurricane,” said Sue Kanoho, executive director of the Kauaʻi Visitors Bureau. “So I thanked him for filming here, and I said, ‘don’t worry, you guys will be gone before the hurricane hits.’ And he looked at me so strangely.”

The Jurassic Park cast had already been on the island for an extended time filming scenes such as Dr. Alan Grant discovering a dinosaur egg, the automated ride through the park in the distinguished SUVs and other clips where wide angles of untouched landscape where needed.

The crew was in their final days of filming scenes when the Category 4 storm struck the island chain.

“Ironically, I was stuck in the hotel that they were staying at, And the next morning I was looking at Jeff Goldblum and Laura Dern on a balcony, and I said, ‘I’m so sorry,’” Kanoho recounted.

Fortunately for the Jurassic Park staff and other tourists, resorts on the island were well constructed, but that was not the case for many parts of the fourth-largest island of the Hawaiian archipelago.

“It was devastating. There were places on the south shore that were inundated, houses were knocked off their foundations and vehicles were gone. It was the worst thing we’ve survived in my 35 years here,” Kanoho said.

Hurricane Iniki caused more than $3 billion in damages – an amount that would be around $6 billion today due to inflation.

Parts of the state had no electricity for weeks, and thousands of people were displaced from their homes.

Similar to Hurricane Andrew, which struck Florida only a couple of weeks before, there are few signs still around today from the 1992 storm. But due to the adventurous nature of some of the Jurassic Park crew, there was at least one clip in the over two-hour movie that showed the force of the Category 4 hurricane.

During the scene when a storm hits the imaginary island, waves are splashing upon the rocks and the shore as John Hammond, the CEO and creator of Jurassic Park, called for the evacuation of the dinosaur tour.

Video of the waves and the torrential rainfall was actually taken along Kauai’s Nawiliwili Bay during the run-up to Iniki’s landfall.

With a rare storm hitting Hawaii during the filming for the 1993 movie, it is any fan’s guess on what scenes were added or scrapped due to the impacts of Mother Nature.