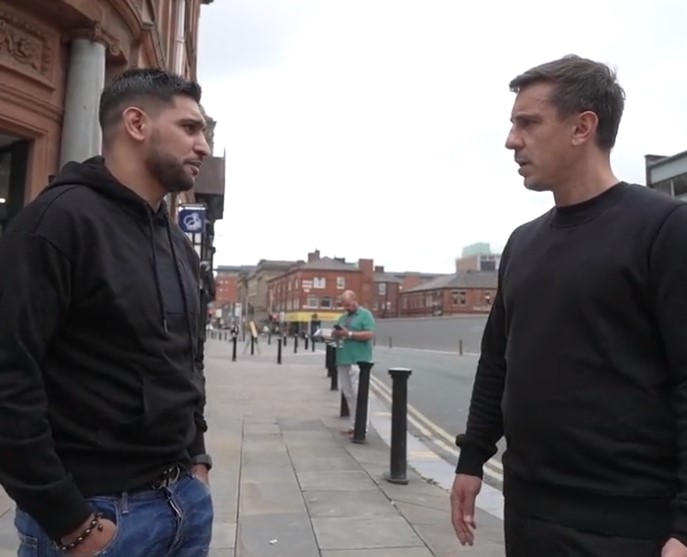 Amir Khan recently walked away from boxing as a former unified world champion, but he still thinks about one big fight that got away.

The former light-welterweight king retired from the sport following a sixth-round stoppage defeat against long-time rivalKell Brookearlier this year.

Just two weeks later, British legend Khan was linked to a fight with Floyd Mayweather Jr, someone who has been on his hit list for years but for one reason or another the fight never happened.

After recently reaffirming his retirement decision, ‘King’ remains confident that if he had gotten his shot at the man who retired with a perfect 50-0 professional boxing record, he would’ve won.

“You know what? I beat him. Honestly, I beat Mayweather,” Khan told Manchester United legend Gary Neville on The Overlap.

“I’m going to get a lot of hate for this. I’m so sorry, guys. But you know what? Look, you have to believe in yourself, and this is one thing I’ve always done all my career.

“He really wasn’t the biggest puncher in the game. So, it would’ve been like a game of chess, but I would have outboxed him.”

The 35-year-old explained that in 2014 he had signed to fight Mayweather but the fight fell apart for the pettiest reason and ultimately never happened.

“Why didn’t it happen? Because I announced it first before him,” Khan added.

“He wanted to be the man to announce the fight but because I announced it he spat his dummy out and said, ‘Look I ain’t fighting you.’

“So, that’s Mayweather, he has to make all the rash decisions. No one can announce something before him.

“Credit to him because look at the end of the day he’s proven it with what he’s done in the sport of boxing.”

While Khan appears content in retirement after falling out of love with the sport, Mayweather continues to box, albeit against low-level opposition in exhibition fights.

Since retiring in 2017, ‘Money’ has travelled the globe for lucrative bouts against Japanese kickboxer Tenshin Nasukawa, YouTuber Logan Paul, and his former sparring partner Don Moore.