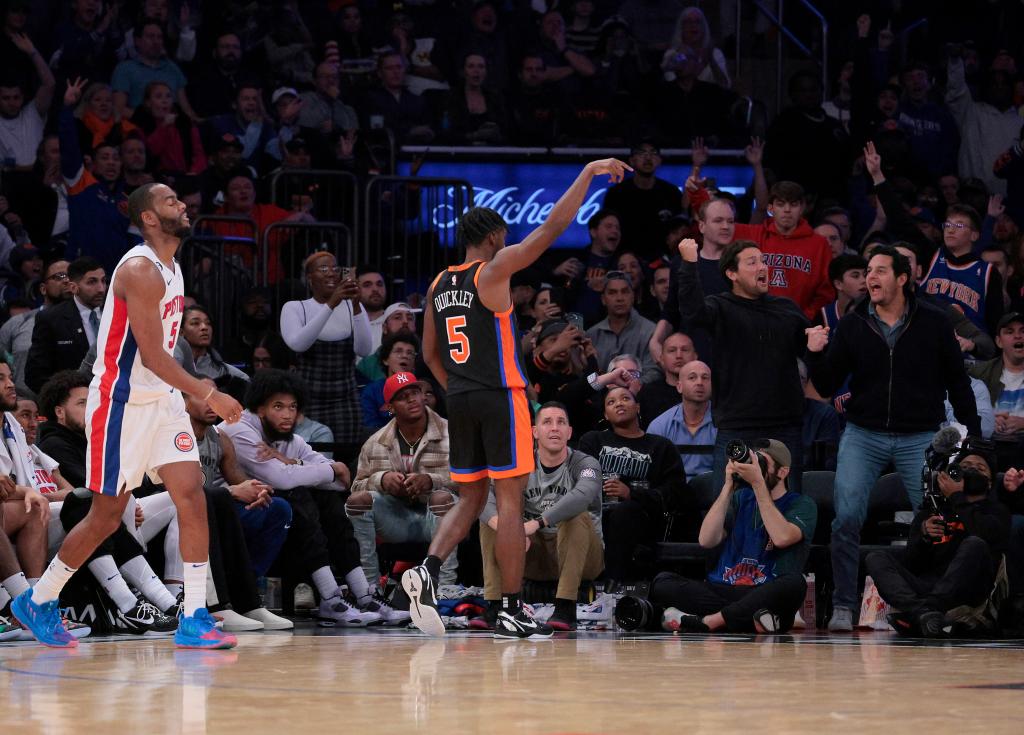 His left corner 3-pointer with 40.5 seconds left put the Pistons away in much-needed 121-112 victory at the Garden two nights after an ugly one-sided loss at the Nets.

It was the first game in which the guard has hit multiple 3-pointers since Oct. 28 against the Bucks.

“He’s capable. That doesn’t surprise me,” Jalen Brunson said. “He never shies away from moments. So, you expect that from him. He steps up and he makes big plays.”

Quickley finished with eight points, five rebounds and two steals in 21 minutes. But the two 3-pointers were the most significant part of his evening after he entered shooting just 25.6 percent from distance.

A day after the veteran guard made headlines by saying he was in “the unknown,” regarding his limited role, Thibodeau made a point of relaying a conversation the two have since had in which the coach told Rose he has played well up to this point.

“I just wanted to make that point about him, and I told him this. I said, ‘You played very well,’” Thibodeau said. “‘You haven’t shot the ball well in the last two games. No one played well in our last game.’ But overall, he’s played very well.”

Rose was the first Knick off the bench in each half and scored eight points in 16 minutes.

The Knicks tweaked their starting lineup, replacing Jericho Sims with Isaiah Hartenstein. Sims started the last game and Hartenstein the one before that in place of injured center Mitchell Robinson (sprained right knee). Hartenstein produced a game-high 12 rebounds along with six points in 33 minutes.

Quentin Grimes scored five points in eight first-half minutes in his second game back following a setback with his sore left foot. He didn’t play in the second half, but it wasn’t health-related, according to Thibodeau.

The Pistons were without Cade Cunningham, the No. 1 pick in the 2021 draft, due to left shin soreness. Marvin Bagley II (knee) was also out for Detroit. Former Knick Alec Burks scored 17 points in his return to the Garden.