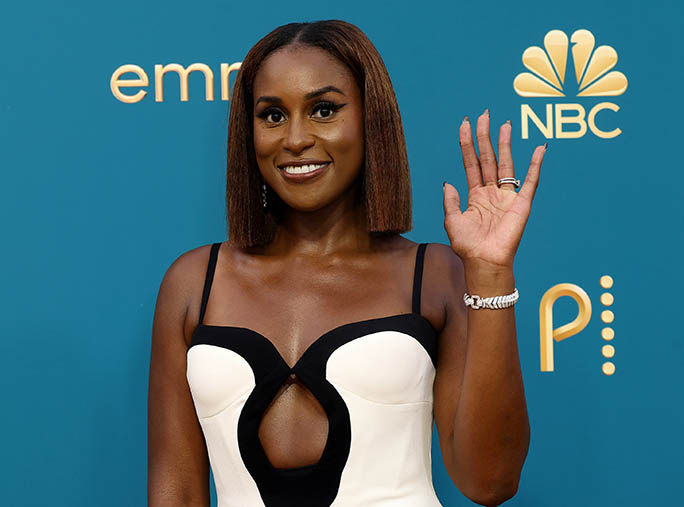 Issa Rae swapped her usual bold and bright looks for a black and white gown at the 2022 Emmy Awards. The annual ceremony was held at Microsoft Theater in Los Angeles last night, hosted by Kenan Thompson. Rae was nominated for Outstanding Lead Actress in a Comedy Series for her role in her hit HBO Max series “Insecure.”

Rae looked stunning while arriving on the red carpet. The actress wore a custom Sergio Hudson gown. The garment had thin spaghetti straps and a circle cutout at the center. The standout element came from the black ruffled train that delicately swept the floor as she walked.

Rae also debuted a new blunt cut copper bob, which she parted in the middle and styled straight. For makeup, the “Lovebirds star’ went with sharp winged eyeliner and a deep burgundy lip. To let her dress do all of the talking, Rae simply accessorized with drop earrings, a diamond bracelet and several midi rings.

Unfortunately, her footwear choice was not visible underneath her gown but it would be no surprise if the producer completed her look with strappy sandals or sharp pumps. She also favors metallic silhouettes. When off-duty, the comedian will likely step out in high-top sneakers from brands like Converse.

The 2022 Emmy Awards celebrate the top performances and programs in television. This year’s ceremony, held at the Microsoft Theater in Los Angeles, will be hosted by Kenan Thompson. HBO’s “Succession” is leading the annual event’s 2022 nominations with 25 nominations, followed by “Ted Lasso” (20), “The White Lotus” (20), “Hacks” (17) and “Only Murders in the Building” (17).

PHOTOS: Discover more celebrity arrivals on the red carpet at the 2022 Emmy Awards.