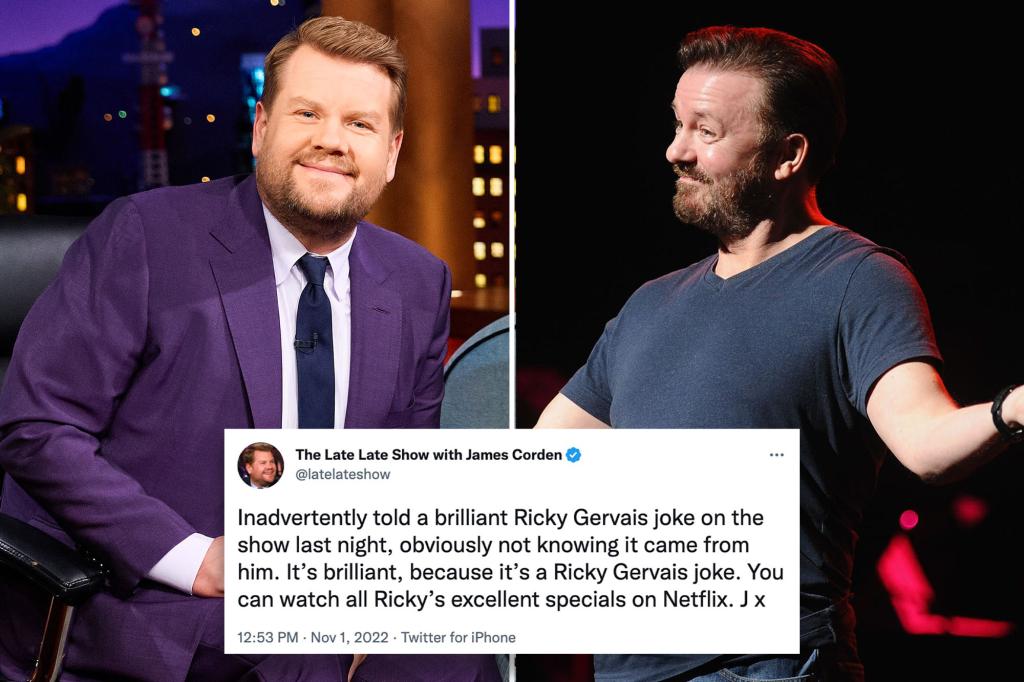 Talk show host James Corden is setting the record straight after being accused of stealing a joke from comedian Ricky Gervais.

“The Late Late Show” host, 44, raised eyebrows after repeating an almost-identical version of the comedian’s quip during his show on Monday.

Speaking in front of a live audience, the scandal-scarred actor said, “When you see Elon Musk talk about Twitter, he does this thing where he goes, ‘Well, it’s the town square.’

“But it isn’t, ‘cause if someone puts up a poster in a town square that says, ‘Guitar lessons available,’ you don’t get people in the town going, ‘I don’t wanna play the guitar! I wanna play the piano, you piece of s–t!”

“It’s like, ‘That sign wasn’t for you – it was for somebody else. You don’t have to get mad about all of it,’” he added.

The joke was very similar — if not identical — to one Gervais made in his 2018 Netflix stand-up special “Ricky Gervais: Humanity.”

After being met with criticism, Corden insisted he didn’t know where the joke came from.

“Inadvertently told a brilliant Ricky Gervais joke on the show last night, obviously not knowing it came from him,” he tweeted from his show’s official account.

“It’s brilliant, because it’s a Ricky Gervais joke. You can watch all Ricky’s excellent specials on Netflix. J x”

Corden was forced to speak up after Gervais poked fun at Corden for repeating the joke, writing in a now-deleted post, “The bit about the town square advert for guitar lessons is brilliant.”

When asked if he thought the “Cats” actor stole the quip on purpose, Gervais responded, “I doubt he would knowingly just copy such a famous stand-up routine word for word like that.”

And when asked why he deleted his initial tweet poking fun at Corden, Gervais admitted it was because he “started to feel sorry for him.”

The controversy comes hot on the heels of the Balthazar debacle, which saw the famous NYC restaurant’s owner Keith McNally call the comedian “the most abusive customer” in the restaurant’s 25-year history.

After accusing the Brit of boorish behavior, McNally banned him from the Manhattan eatery. But just hours later, Corden called him to “apologize profusely” and the ban was lifted.