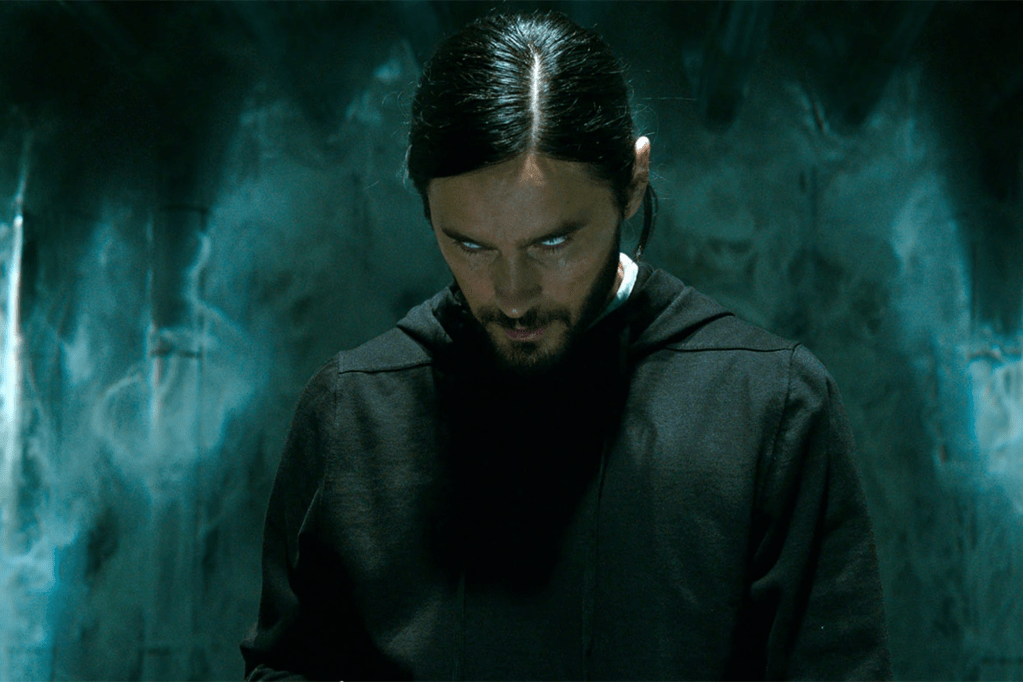 Renowned scientist Dr. Michael Morbius has a brilliant idea. In order to cure a debilitating bloodborne illness, he will combine human DNA with that of a Costa Rican vampire bat.

How does it work? No clue. He authoritatively says “coagulants,” slaps a couple vials in a centrifuge, et voila!

The issue is personal. Michael (Jared Leto) and his best friend Milo (Matt Smith) both have a lifelong mysterious disease that weakens their bodies and forces them to walk with two canes. Determined, he illegally experiments on himself.

Morbius is then shocked when the trial leaves him bat-like and fanged with a thirst for human blood.

Huh? That’s like if I melded my DNA with a hippo’s and was surprised that I became hungry, hungry.

The tired and gloomy new Marvel movie “Morbius,” which is made by Sony and not part of the massive Marvel Cinematic Universe, suffers from chronic obviousness. Of course, Dr. Morbius (Jared Leto) is gonna become Batboy. Of course, Milo (Matt Smith) is gonna want in on the action. Of course, the character I shan’t name is gonna accidentally wind up a vampire too. Director Daniel Espinosa’s film isn’t a disaster — just a bat-nap.

Comic book films are often formulaic, yes, but you need only look to last year’s “Spider-Man: No Way Home” to see that there are ample opportunities for the unexpected. Here, there are only opportunities for Leto to be a creep and wildly contort his body. That is the most predictable part of all.

“Morbius” is one of Marvel’s growing number of antihero films — a more palatable one than dumb-as-rocks “Venom,” at least — about an off-putting person who develops a destructive power that he can’t fully control and whom we don’t know how to feel about for two hours. The viewer struggles to care.

We’re also aware that there are many, many better vampire stories than Count Dreckula here (check out the Netflix series “Midnight Mass”) and not much sets this one apart besides its sexlessness and lack of wit. It’s closer to the horror genre than most Marvel films; however, it’s never scary.

Aesthetically it steals from a lot of what came before it. In one scene, Morbius stands in the center of a tornado of bats as a booming score blares, just like Christian Bale did in “Batman Begins.” When Morbius and Milo go into vampire mode, their mugs look like emo versions of Spike from “Buffy the Vampire Slayer.” And, come on, an experiment that turns a guy into a bat is a helluva lot like a lab accident making Peter Parker into a spider.

Leto is at his best when he isn’t flying around hissing and using echolocation. He’s well-cast (all the actor needs to do to prepare to play a vampire is wake up), and you believe he cares for Milo (Smith, as we saw on “The Crown,” does brat well) and his colleague Martine (Adria Arjona). However, the scenes with young Michael (Charlie Shotwell) at the beginning are better and more moving than anything that comes after.

The cacophonous ending sets up a sequel, but I hope it never sees the light of day. Actually, considering it’s about vampires, maybe I do!