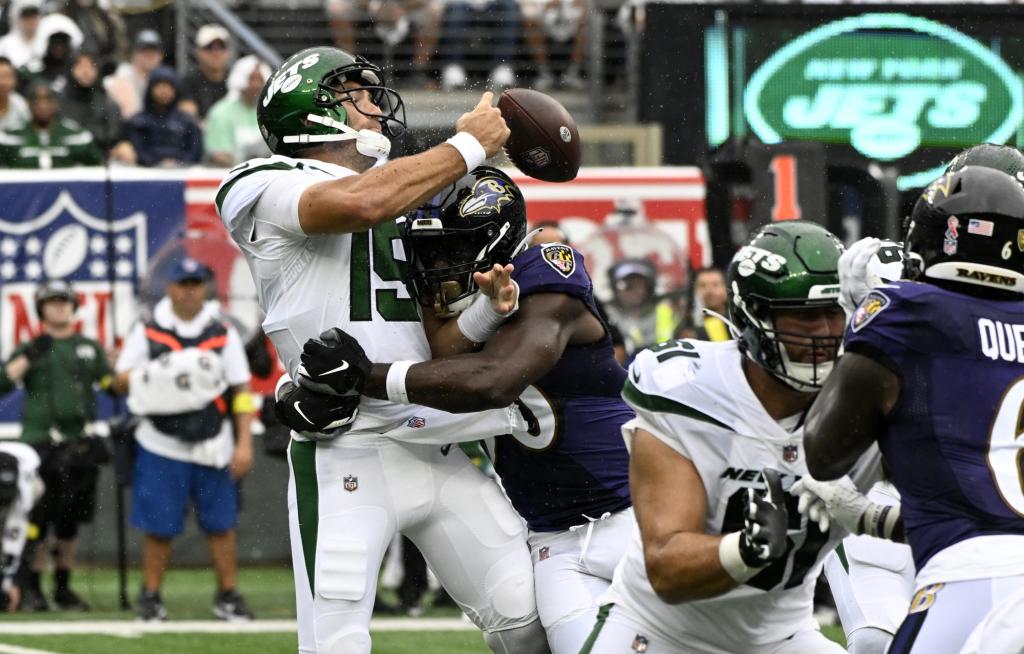 It took less than three quarters for Jets fans to want a change at quarterback. The defense, so strong early on, wilted in the second half.

Another Jets season started with familiar frustration, the fourth straight year they dropped their opener and sixth time in seven years. Even after playing a mostly sleepy first half and without a number of key players, the Ravens cruised to a 24-9 victory at MetLife Stadium as the Jets’ offense sans Zach Wilson was inept.

Lamar Jackson threw three touchdown passes, and Joe Flacco, the Jets’ starter until Wilson is ready to return from a knee injury, was booed. In the third quarter, after another short drive that went nowhere, the large crowd began chanting for Mike White, Flacco’s backup. The capper came late in the fourth quarter when Michael Carter, the Jets’ best offensive player on Sunday, dropped a touchdown pass on fourth down. Later in the quarter, an Elijah Moore touchdown catch was wiped away because of pass interference called on the second-year receiver. The Jets finally found the end zone on a 3-yard touchdown from Flacco (37 of 59 for 307 yards) to Tyler Conklin. Greg Zuerlein missed the extra point, drawing further boos from the angry crowd.

It was only 10-3 at the break, but Jackson took over the third quarter, throwing scoring strikes of 17 and 55 yards to Devin Duvernay and Rashod Bateman. The Jets finally put together a strong drive, but rookie Breece Hall fumbled at the Ravens’ 15-yard-line early in the fourth quarter, ending any hopes of a comeback.

Their defense kept the Jets in the game in the first half, controlling Jackson and limiting the Ravens to 92 yards of offense. Two big plays, a Flacco interception when his receiver fell down and a LaMarcus Joyner pass interference, led to the 10 Baltimore points.

The Jets’ offense, meanwhile, couldn’t get out of its own way. The pass protection was spotty and Flacco was shaky. All they could muster was a pair of long Zuerlein field-goal attempts, one of which he missed.

There were some crucial mistakes mixed in, aside from the Flacco interception. Conklin fumbled after fighting for a first down late in the half, and the ball rolled backwards, forcing the Jets to settle for a field goal. Corey Davis dropped a pass that would’ve gone for a first down.

After halftime, the game quickly got out of hand. Fans booed and chanted for the backup. Another Jets season of low expectations started poorly.