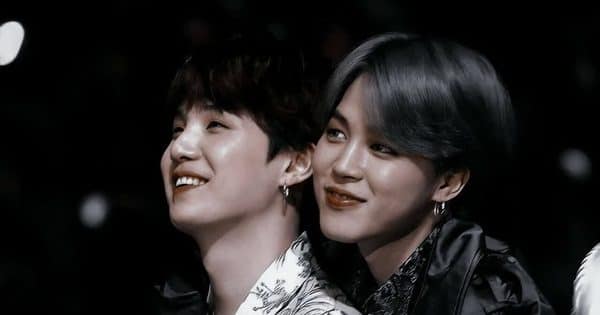 BTS members RM, Jin, Jimin, Suga, J-Hope, V and Jung Kook never have ever officially dated anyone, as per the reports. There might have been a few rumours of their romantic relationships but there have been no confirmations. While the K-pop sensation are known for making everyone drool over their handsome looks, they are also known for pulling each other’s leg. One such incident that remained etched in the ARMYs memory, was when Jimin pretended to be Suga’s miffed girlfriend. Also Read – Trending Hollywood News Today: BTS member Jimin’s birthday prep, Justin Bieber ends friendship with Kanye West and more

In the past, BTS members had appeared together as guests on Super Junior’s Kiss the Radio show. During the episode, Suga was asked to make a freestyle rap for his imaginary girlfriend who is apparently miffed with him because he was not in touch with her all day long. Also Read – BTS member Jimin’s birthday projects around the world: Fundraisers for girl child education, anti-human trafficking and more

Suga was quite baffled with the scenario and asked several questions about it. He found it quite difficult to compose a rap for it. To help him out, Jimin decided to be Suga’s girlfriend and asked, “Oppa, how could you do this to me? How could you not answer my calls all day? Is it because you’re pale?” To which, Suga responded with an uncontrollable laughter and said, “I’m scared, I don’t think I can do it. I have a fear of doing it.” Also Read – BTS at TMA awards: After footage of Jungkook being interrupted by emcee; another video of Taehyung and TXT’s Beomgyu goes viral

While Suga was having a tough time dealing with his miffed girlfriend, RM jumped into the conversation and rapped, “Yo! Why are you mad? You can’t be doing this right now. I’m placating you.” Jimin then decided to take his character to the next level and asked RM, “Who are you?” To which, RM gave him a befitting reply, “I am Rap Monster.”

Earlier this year, BTS announced that they were going separate ways to pursue solo careers and grow. However, they also pledged to return someday. Septet Jin, 29, Suga, 29, J-Hope, 28, RM, 27, V, 26, Jimin, 26, and Jungkook, 24, broke the news to their armies of fans during their annual FESTA dinner which celebrated the hugely popular band’s nine years together.

Formed in 2010, South Korean boyband BTS, also known as the Bangtan Boys, also took a break in December 2021, when the group said they needed some down time to recharge. They also took a mini break in 2019.