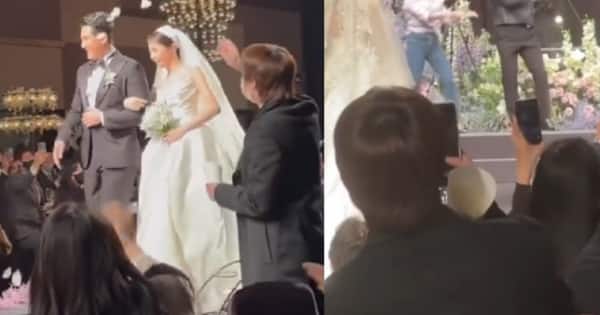 BTS member Jin aka Kim Seokjin will be heading to the military in a couple of days. The date is supposed to be December 13 though there is not much clarity on the same. In the mean time, Jin aka Kim Seokjin has been spending time with his friends and family. He was seen at the wedding of singer Park Ji-Yeon with baseball star Hwang Jae Gyun. She is from the group T-ara. Jin aka Kim Seokjin was seen showering flower petals at the couple as they walked down the aisle as bride and groom. A video has been clicked by a fan at the wedding. Famous South Korean singer and actress IU was also seen with him. Also Read – BTS: Jin aka Kim Seokjin takes us through the Super Tuna journey; his unbridled excitement on catching a real bluefish tuna is unmissable

Take a look at the video of Kim Seokjin at the wedding Also Read – BTS: Kim Taehyung and Jungkook hang out with Parasite star Choi Woo-Shik and his brother at a bowling alley [View Pics]

seokjin sat next to IU ? pic.twitter.com/WcIHP4tXjz

We can see that the wedding looked like a grand affair. The singer who got married in Shilla Hotel had been dating the sportsman for a couple of years. Jin was on the bride’s side with T-ara members, IU and some other celebs. ARMYs are worried as Yeonchan base which is where Jin will be enlisting is already seeing a surge in visitors. ARMY is worried as many young people will be enlisting and such a chaos can be harmful. Also Read – BTS: Jin aka Kim Seokjin is the cutest drunk ever on Youngji’s show; The Astronaut singer makes surprising revelations

Big Hit Music and Seokjin have categorically told people not to turn up at the base. Only family members and close friends attend the ceremony.