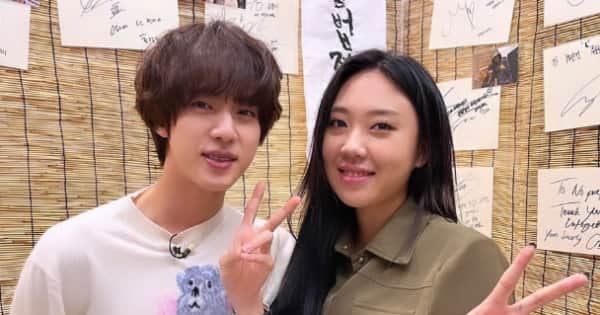 BTS member and eldest hyung Kim Seokjin aka Jin was the guest for the finale at Youngji’s show. The programme is special as guests have to binge drink along with the host. Jin aka Kim Seokjin enjoys variety shows immensely. On the show, he was his honest and funny self. Dressed in a tee and denims, he looked great with his permed hair. BTS member Jin aka Kim Seokjin who will head to the military soon for his mandatory service said that he has very few friends. He said that he has less than 10 celeb friends in his contact directory on the phone. He said most people felt that BTS were superstars, and got pressured at the thought of befriending them.

Jin also revealed that very few things hold his interest in life than BTS, his fans and himself. When the host thanked him for his contribution towards spreading Korean culture, he said that his members had a greater role to play than him. Just how humble he is. Jin told the host that she would beat him at the drinking game easily. The whole episode is super cute and Jin just radiates that goofy BFF energy.

seokjin said that he’s wearing a sponsored shirt, he is wearing a dior shirt. you all know what im thinking??? ? pic.twitter.com/Jdj9SoZyXa

“for me, i don’t really have much interest in things other than BTS, my fans, and I” ㅡ 221020, Kim Seokjin Interview with Youngji https://t.co/d4MJgg4Pb0

?: i wanted to say thank you for contributing to the development of korean culture
?: it’s our members who did it, not me

KIM SEOKJIN YOU CONTRIBUTED A LOT AS WELL ??? pic.twitter.com/YpgsZGyEW1

BTS aka the Bangtan Boys announced that Jin would be enlisting by the end of 2022, or early 2023. He has decided to cancel the deferment. BTS has announced projects for ARMY for the period 2023 to 2025. Jin will be performing The Astronaut Live at Buenos Aires with Cold Play.