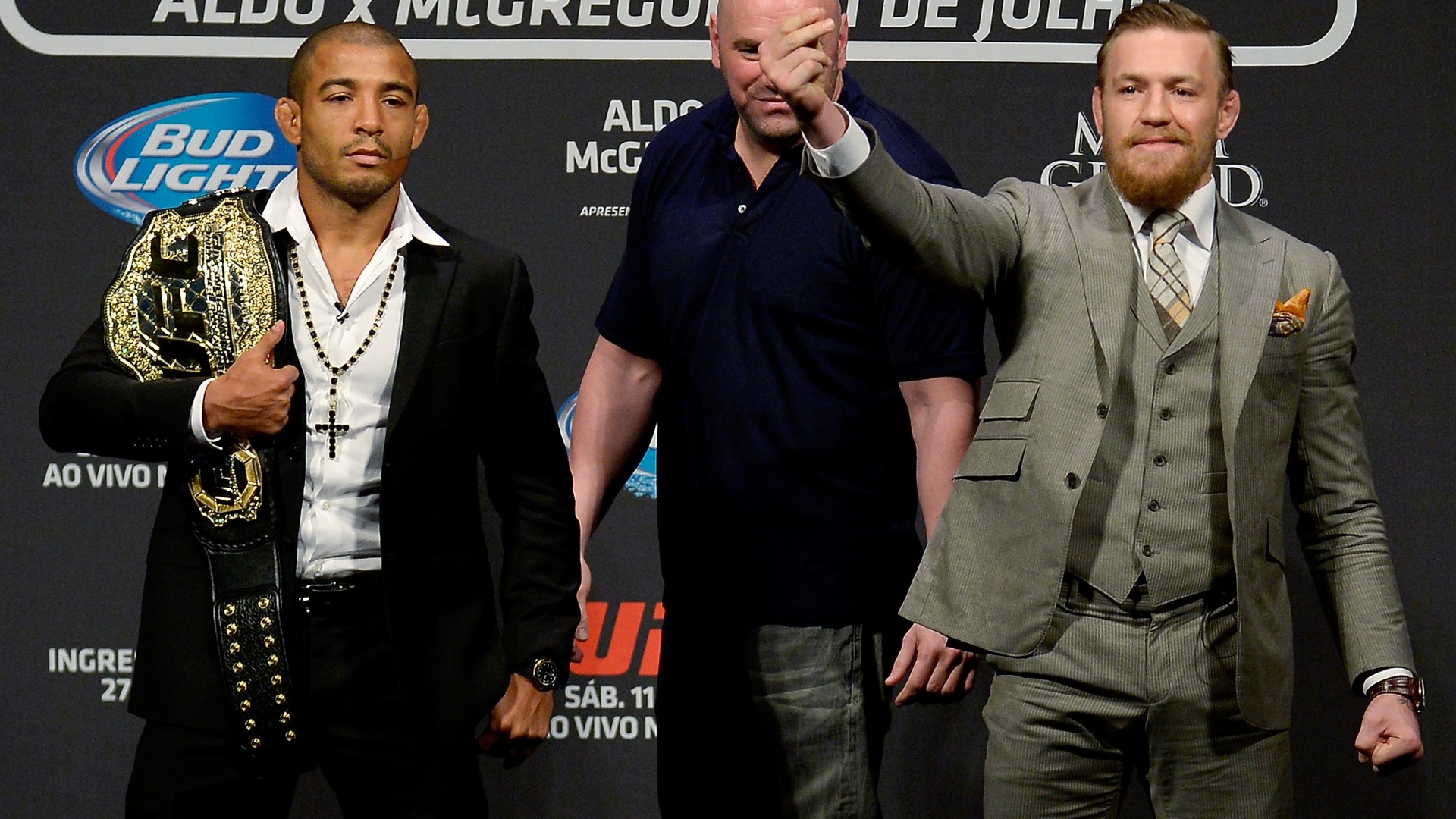 Jose Aldo has been reflecting on his intense rivalry with Conor McGregor after retiring from MMA.

Aldo confirmed to the UFC that he planned to hang up his gloves after losing to Merab Dvalishvili at UFC 278 in what was the Brazilian’s 20th fight under the promotion’s banner.

The 36-year-old walks away from the sport as one of the most decorated fighters of all time after making a record seven defences of the featherweight title.

Aldo beat the likes of Urijah Faber, Chad Mendes, and Frankie Edgar to set up the biggest fight of his career against Conor McGregor.

Bereft of challengers by this point, Aldo would’ve been glad to see McGregor come along but his happiness soon turned to a nightmare when the UFC decided to take the two men on a world tour ahead of their ill-fated fight at UFC 189.

Chaos ensued after the Brazilian referred to himself as the ‘King of Dublin’ in front of a raucous crowd and McGregor responded by insisting he is the King of Dublin before putting his feet on the desk.

Aldo then mimicked his rival and before he knew it ‘Mystic Mac’ had snatched the UFC title his opponent had brought with him and placed it proudly in front of him.

McGregor victoriously held the belt aloft for several seconds as almost everyone in attendance cheered him on. Aldo tried and failed to immediately get his belt back as Dana White intervened to stop things from getting any more out of hand.

After beating ‘Money’ at UFC 189, McGregor vs Aldo was booked again and this time it was even bigger.

When fight night came, Aldo looked nervous, and this was pointed out by UFC commentator Joe Rogan moments before he was brutally knocked out by the first punch McGregor landed.

Despite everything, McGregor and Aldo formed an unlikely friendship after their fight and ‘Scarface’ now looks back on their rivalry with a smile.

During a recent podcast appearance, ‘The King of Rio’ explained how he would receive drunk calls from McGregor in the lead-up to their UFC 194 clash.

“Bro, he would call our private jet completely drunk, just talking shit. F***, it was so funny.

“He’s a good person because he does understand the other side.

“He understands the other person. But he’s a guy with vision.”

McGregor hasn’t fought since suffering a catastrophic leg injured at UFC 264 in July 2021 and is currently healing up ahead of his eagerly anticipated 2023 comeback fight.

The former dual-weight UFC champion is currently at loggerheads with MMA legend Michael Bisping, who he took an unnecessary swipe at earlier this week.