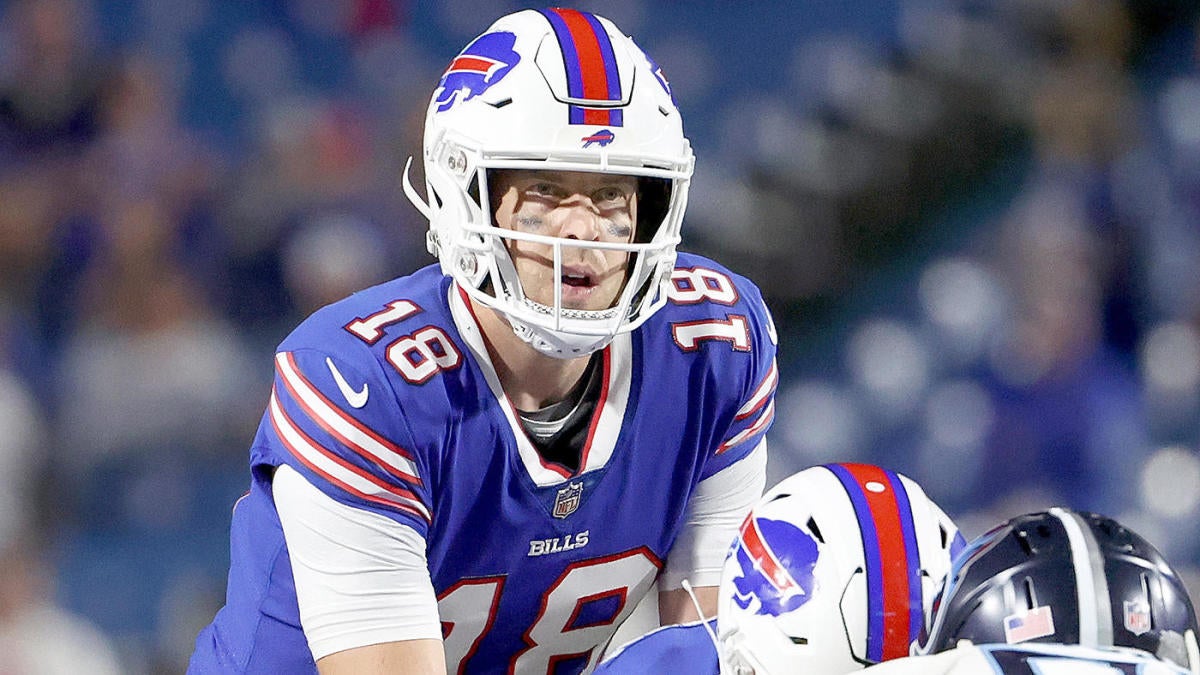 Bills quarterback Josh Allen missed practice on Thursday and got in a limited session Friday as he deals with a right elbow injury to the ulnar collateral ligament and related nerves. He’s listed as questionable for Week 10, and veteran backup Case Keenum would start on Sunday against the Minnesota Vikings if he’s unable to go.

There’s no replacing Allen if he misses any stretch of time. He’s been the MVP favorite for most of the season and epitomizes the phrase “one man band” better than anyone else in the league right now. He leads the Bills in rushing and has racked up the fifth-most total yards (passing and rushing) by any player through eight games since the 1970 AFL-NFL merger. He’s accounted for 23 of the Bills’ 25 touchdowns this season, the highest rate (92%) in the NFL.

Below is a look at the most total yards (pass and rush) through eight games — since 1970.

Bills head coach Sean McDermott has seen the best and worst of backup quarterback situations, and thankfully Case Keenum is a little more Jeff Garcia and a lot less Nathan Peterman. When Donovan McNabb got hurt in 2006 with McDermott as the Eagles’ defensive coordinator, Garcia took over and Philadelphia won their final five games to make the playoffs. A little bit different than 2017, when Peterman threw five first-half picks in his first career start. A year later, when Allen missed the only five games of his career, Buffalo started three different quarterbacks (Peterman, Derek Anderson, Matt Barkley) and went 1-4.

There’s reason for Bills Mafia to have confidence Keenum could keep the seat warm for Allen. This would be the best supporting cast Keenum has played with since 2017 with the Vikings, when Minnesota had capable wide receivers and the No. 1 scoring defense, just like this Buffalo team. Keenum went 11-3 that season, finished seventh in passer rating and helped lead Minnesota to the NFC Championship. He can hold down the fort, but he can’t be remotely close to Josh Allen.

Here are the three biggest changes you can expect:

Don’t expect a reenactment of the Minneapolis Miracle, even if Keenum would be reuniting with Stefon Diggs and facing his former team. Keenum didn’t have a single completion 20-plus yards downfield in two starts with the Browns last season. This underthrown ball to an open Odell Beckham Jr. on a double move showcases his limitations:

Allen is 14 of 24 for 618 yards and six touchdowns on throws 25-plus yards downfield this season — all the best marks in the league. He can make throws that only a small handful of people in the world can make, like the seed he threw in the smallest of windows to Dawson Knox for the game-winning touchdown against Kansas City earlier this year.

Keenum should be serviceable in the intermediate passing game. He ranks above the league average in completion percentage on throws 11-20 yards downfield since 2017, and below average on the short and deep throws.

This touchdown pass to Jarvis Landry last year is a good example of play design that works for Keenum — play action with a deep crosser that he hits in stride for a score:

2. Conservative on third down

The Bills might miss Allen most on third down. Buffalo leads the NFL in third-down conversion rate (52%) this year, and has the third-best rate on third-and-long (38%).

We know Keenum won’t be running over defenders on crucial downs like Allen, who is tied for second on third-down conversions on the ground this season. Allen has also embraced the gunslinger mentality on third down, where he has the longest average pass length in those situations this season (minimum 50 attempts).

Allen has a 127.0 passer rating on third-down passes to the first-down marker this season. Keenum has a 66.0 rating in those situations since 2017, one of the worst marks in the NFL.

That could mean more action for Bills punter Sam Martin. Buffalo has 15 punts this year, fewest in the NFL, a stat I’m sure they use like a badge of honor.

Buffalo won’t be able to rely on Allen’s improvisational skills to make big plays either. Allen leads the NFL with 9.0 yards per attempt when pressured this season. He has a better passer rating when pressured (96.0) than Tom Brady does on all plays (90.5).

His deep ball on the run to Diggs in Week 1 is one throw Keenum doesn’t have in the arsenal:

One thing Keenum will have at his disposal is the aforementioned Diggs. Keenum actually has similar numbers throwing to Diggs in his career as Allen. And Keenum was throwing to Diggs before he emerged as a superstar and was the No. 2 option to Adam Thielen in Minnesota.

It’d be easy to assume Buffalo will go to the ground game more without Allen, but I’m not so sure. The Bills have one of the worst run-blocking units in football and they rank fourth-worst in Rush EPA this year. The Bills throw at one of the highest rates in the league and sometimes a check-down pass is like a run. That’s why Buffalo traded for pass-catching back Nyheim Hines, who could stand to get more involved.

Either way, let’s hope Allen can play through an injury that could threaten an MVP campaign and Super Bowl run. Football wouldn’t be as fun without him.