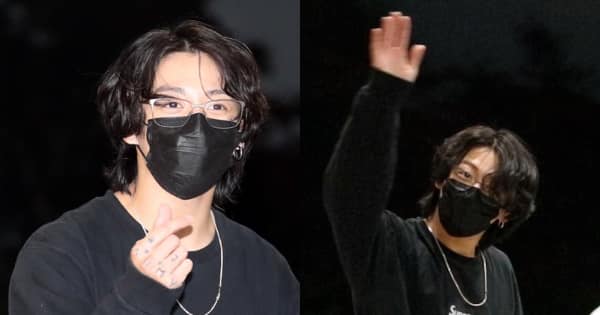 BTS‘ Golden Maknae Jungkook aka Jeon Jungkook was in Qatar due to his work schedule for FIFA World Cup. The youngest BTS member was all alone and had a jam-packed schedule of shooting it seems. He got to see a lot of ARMYs and was seen having a good time shooting all by himself. And just now, the Left and Right hitmaker has returned to his base, home country, South Korea. He was spotted at the airport by the media and Jungkook greeted all of them in the sweetest manner.

The Golden Maknae of Jungkook flew to Qatar on the same day as Kim Seokjin aka Jin flew to Argentina. Jungkook shot for promotional campaigns for the FIFA World Cup. He shot for two days in black and white outfits as per the videos that went viral. And now, he has returned home. Jungkook is wearing sweatpants and a loose shirt. He also wore the glasses he had on when he was flying to Qatar.

Jungkook greets the ARMY and media

As soon as Jungkook got out of the airport, he dropped the bag he was holding down to the ground and greeted the media and the ARMYs who had gathered to see him. He made a lot of deep bows and hearts, both, with finger and his hands. He waved enthusiastically at the loud and cheering ARMYs as well. After sitting in the car, he yet again waved at the ARMYs. The video is going to be a huge trend in Hollywood News now.

Jungkook stopped, dropped his bag and made that deep bow to all fans, he made a big heart & he just keep bowing to them ?. We didn’t deserve such humble .. sweet angel.

When he reached Qatar, Jungkook got a very warm welcome with flowers. The video quickly went viral online. Jungkook’s videos from the streets of Qatar also went viral. Meanwhile, Jungkook has been nominated in the People’s Choice Awards for Left and Right with Charlie Puth. His other projects are still under the wraps. On the other hand, Jungkook will enlist in the military after his schedule is over.