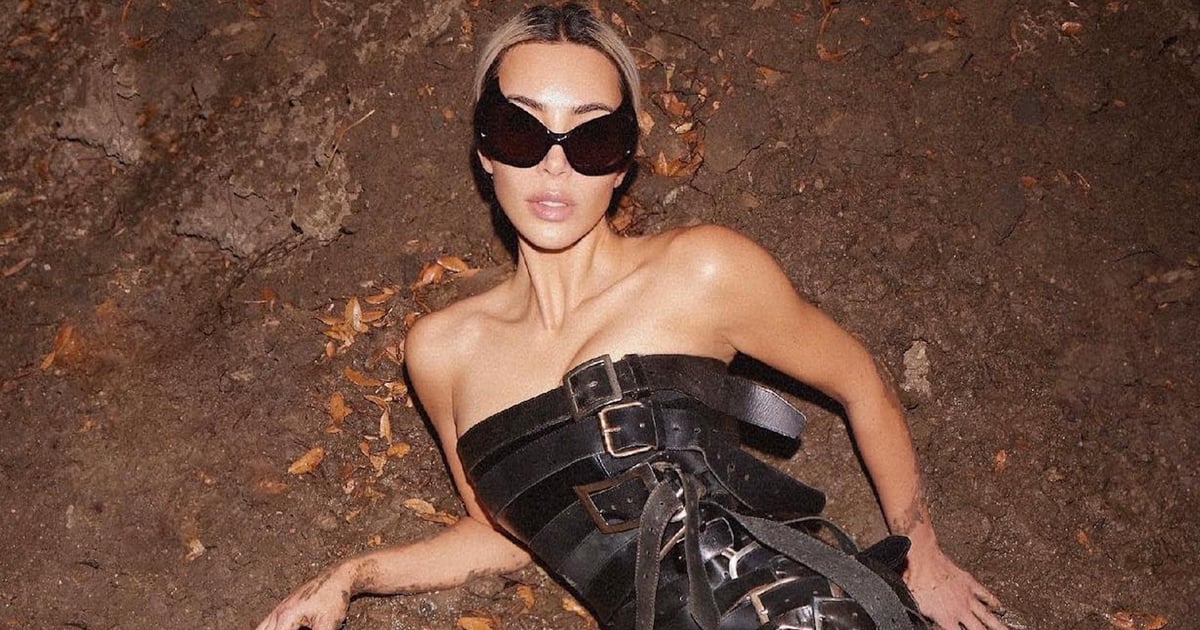 Kim Kardashian might have missed Paris Fashion Week, but that doesn’t mean she wasn’t in the loop on the day of Balenciaga’s spring/summer 2023 show. As official ambassador of the brand, the beauty mogul and Skims designer posed in a look inspired by the theme of the show, even going so far as to make the mud her backdrop. Demna, creative director of Balenciaga, staged his runway in the dirt to purposefully challenge the idea of luxury, and Kardashian’s shoot, taken by Betsy Johnson, followed suit.

Kardashian wrapped herself in a strapless, bandage-effect minidress made of thick leather belts, styled with shapely, futuristic mules and the brand’s new-season winged shield sunglasses. She used her own Skkn products to create a fresh-faced, dewy makeup look that was finished with a slight smoky eye and glossy pink lip. Kardashian pulled back her platinum-blond hair and opted for the most basic milk-bath manicure to allow for full focus on the outfit details. “When I couldn’t make it to the @balenciaga show @demna sent the show to me,” she captioned her Instagram post.

While Kardashian’s ex Kanye West (who is being widely criticized for his “White Lives Matter” shirt on the Yeezy Season 9 runway and attack on a fashion industry editor) opened Demna’s show on Oct. 2, Kardashian is meanwhile holding true to her campaign star title for Balenciaga virtually from home.

Shop a similar version of her sunglasses ahead, then see her appearance at Milan Fashion Week, where she struggled to walk up the stairs in her formfitting chain-mail gown.