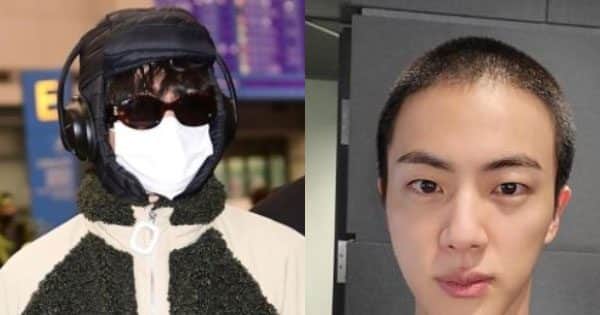 BTS and ARMY are having a heavy heart. Kim Seokjin aka Jin is going to the military. He will be joining the base tomorrow. The vocalist took to social media to share a picture of his in a buzz cut. The look of him as a young military recruit made ARMY shed tears and how. Everyone is heartbroken knowing that he will be away for 18 long months. Well, Kim Taehyung aka BTS V is back in Korea. He was in Mexico filming a cooking based show with his close friends Park Seo Joon and Choi Woo Shik. The filming happened in top secret. He is back a day before Jin aka Kim Seokjin leaves for the military. Kim Taehyung told the media that he is back to see off his Jin hyung to the military. Also Read – BTS: Jin aka Kim Seokjin takes us through the Super Tuna journey; his unbridled excitement on catching a real bluefish tuna is unmissable

Taehyung came back early to Korea to send Jin off. He is the sweetest, most kindest friend one can ever ask for pic.twitter.com/CRERf0svhA

Kmedia headlines this article of Taehyung’s arrival with emphasis on his loyalty:

BTS members are now busy with solo activities. Kim Seokjin gave ARMYs a song The Astronaut before he departed. He also filmed a lot of content for variety shows. Big Hit Music said that there is no programme of him meeting fans so no one should crowd at the base. Only he and his family members will come at the Yeonchan base where he will join 200 other new recruits. Also Read – BTS: Kim Taehyung and Jungkook hang out with Parasite star Choi Woo-Shik and his brother at a bowling alley [View Pics]

ARMY had a meltdown after Jin shared his pic in a buzz cut. He said the hairstyle is looking cuter than he thought it would. There was a lot of hope that they would get alternate service or a shorter tenure. BTS is the biggest cultural ambassadors of Korea. The Bangtan Boys have represented the country at the United Nations. BTS leader Kim Namjoon aka RM said he treats military like a passage of life. He has not thought much about it. After initial training, he will join the combat forces at the North and South Korea border. This is going to be the coldest winter in Korea. Also Read – BTS: Jin aka Kim Seokjin is the cutest drunk ever on Youngji’s show; The Astronaut singer makes surprising revelations