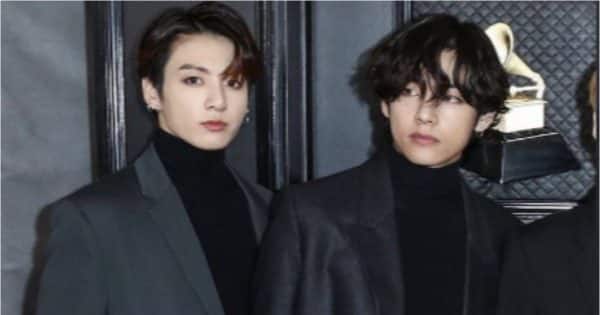 BTS members do not fail to surprise. Today, Kim Taehyung did a short VLive just out of the blue. He did it from his home. The vocalist said that he missed ARMY. He also said that Kim Seokjin aka Jin Hyung had contacted them from the military. He stated that he is doing good and working hard in the ARMY base. Fans became emotional hearing this. It seems Kim Taehyung had his friends over for an evening of gaming. He said that it would look rude if he had an extended V Live session while his friends were there. ARMY has got one more surprise. Also Read – BTS: Jimin departs Paris after the Dior show; France airport steps up security for the VIBE singer; ARMY super impressed with security team

They noticed that Jungkook was singing in the background. As we know, JK has been missing from social media ever since he returned home from FIFA 2022. He was the only big celeb to perform at the opening stage. He sang Dreamers with Qatari singer Fahad Al Kubaisi. Fans are thrilled to hear Jungkook in the background…Take a look at the tweets… Also Read – BTS: Jimin makes FIRST public appearance as Dior’s Global Ambassador at Paris Fashion Week; ARMY gathers in large numbers to cheer for Baby Mochi [Watch Videos]

Wait a damn second.. Taehyung is in his parents place if I’m not wrong and JUNGKOOK is there with HIM in his HOME and they celebrate LNY together (?)
Please say I’m wrong my delusional mind is buffering ?? #taekook pic.twitter.com/eZZ6rUqJ19

OMG JUNGKOOK WAS SINGING IN THE BG OF TAE’S LIVE ? pic.twitter.com/EblUf0LqoX

This reminded me of BT21 teaser when Chimmy was live and Kookie was singing his heart out on the background this case its Taetae ????

The privilege of having Jk hum in the bg live. Only Tae can relate???

my heart is full??

Tae most likely turned off the live to tell Jungkook to be quiet and then came back on after ?

nooooo i can’t process this he is in some hotel with his friends AND JUNGKOOK and they’re casually playing games like??? wbk taekook spending all of their time tgt outside bh and WBK JK IS CLOSE TO TAE’S FRIENDS IM SCREAMING