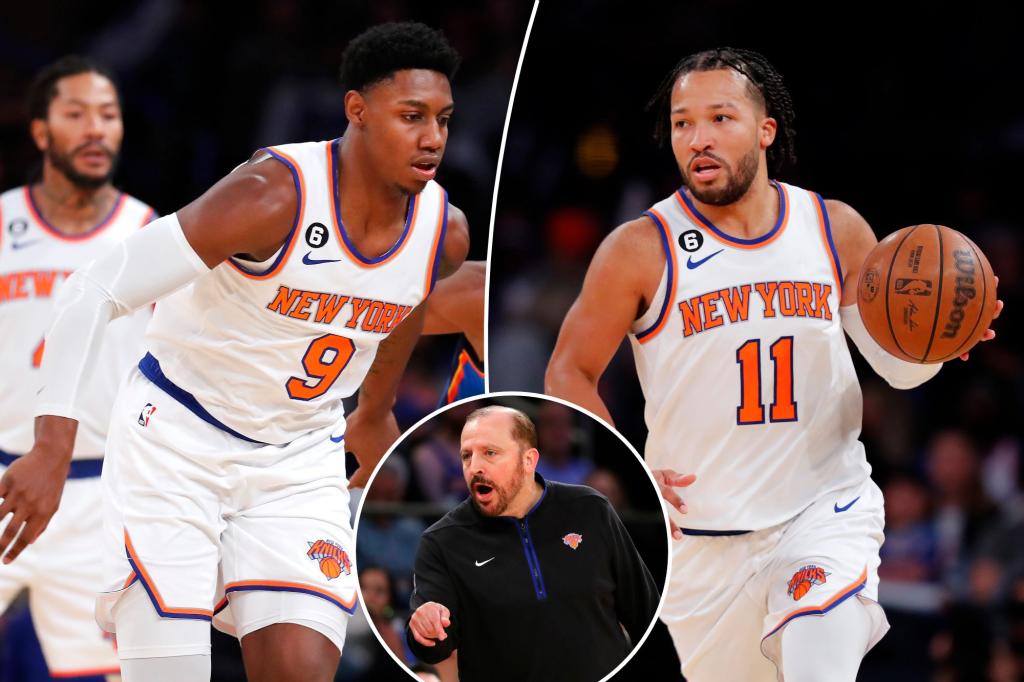 As the Knicks made a charge in the fourth quarter, a backcourt to which they have devoted hundreds of millions of dollars watched from the bench.

RJ Barrett and Jalen Brunson were benched for the entire period and much of the third quarter in Sunday’s embarrassing 145-135 loss to the Thunder at the Garden.

The Knicks, who allowed their most points in a game in 16 years, were gashed from the outside in. A dominant Shai Gilgeous-Alexander knifed his way through defenders en route to 37 points.

Barrett hung best with the long, tall, speedy wing, but too often was on his heels. Just before the first half ended, Gilgeous-Alexander juked his way to the elbow and faked Barrett into the air. SGA leaned in and got off his jumper as Barrett came down on him for the and-one.

Barrett picked up his fourth foul on Gilgeous-Alexander two minutes and two seconds into the third quarter, was subbed out and never returned.

“I think it’s time [to sit] when you’re fouling enough,” said Barrett, who added everyone has to play harder, but he accepted blame. “It falls on me for sure because I was guarding Shai, and he got me into some foul trouble. And that’s not good. I got to do a better job of not fouling.”

He was not alone. The Thunder shot 62.5 percent from the field and 54.8 percent from deep, getting huge games from shooting guard Josh Giddey (a triple-double with 24 points) and small forward Lu Dort (24 points).

As the Knicks’ starters had no answers and Giddey did some of everything, Brunson was replaced by Derrick Rose with 4:46 left in the third quarter and also never reentered.

“I mean, I wouldn’t have played myself either, the way I was playing defensively,” said Brunson, who finished with 17 points on 5-of-9 shooting.

The Knicks, who were down by as many as 19 points, outscored the Thunder by six in the fourth quarter without their starting backcourt. Immanuel Quickley (24 points) and Cam Reddish (26 points) sparked the offense and, in the late going, were flanked by Julius Randle, Evan Fournier and Jericho Sims.

“We just got behind by so much,” head coach Tom Thibodeau said of Barrett’s benching. “We were looking for life, and that group that was in there gave us a little bit of a spark, and so that’s what we went with.”

Quentin Grimes played 7:57 in his third game back from his foot injury. The second-year guard went 0-for-2 and was another defender who struggled to keep up with Gilgeous-Alexander.

Before the game, Thibodeau continued to call Grimes “situational,” only available in short bursts because he has missed so much time since training camp with a sore left foot.

Thibodeau called the center “day to day,” but said Robinson has not begun contact drills yet.