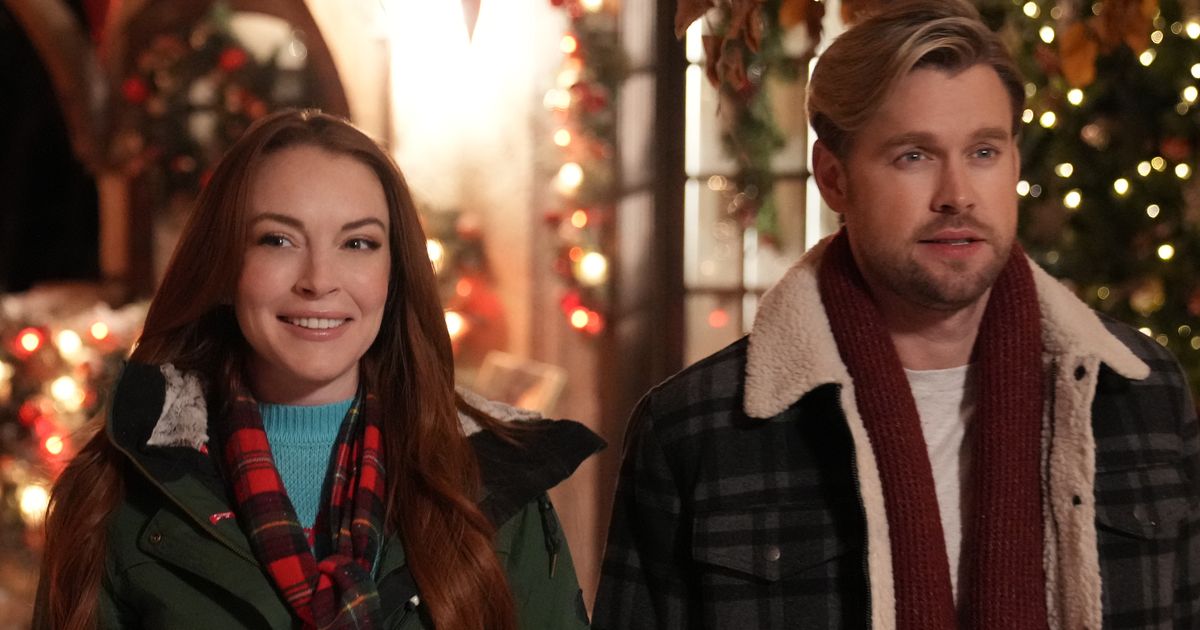 Lindsay Lohan kicked off the rollout of her new romantic comedy, “Falling for Christmas,” with a playful hit of Yuletide nostalgia.

Last week, Lohan unveiled a new rendition of “Jingle Bell Rock,” the same song she performed with co-stars Lacey Chabert, Rachel McAdams and Amanda Seyfried in 2004’s “Mean Girls.” Though “Jingle Bell Rock” is used in a critical “Falling for Christmas” scene and plays over the end credits, the actor and singer said the 2022 version began as “a joke that I made in a conversation,” and wasn’t part of the film’s original script.

“I was like, ‘Wouldn’t this be a good idea?’ It was one of those moments where it comes back and kicks you in the ass, and you’re like, ‘Oh my God, now I have to do it,’” Lohan told HuffPost. “It was originally going to be us all in the blooper reel, me and the cast doing a ‘Mean Girls’ dance together. I felt that was taking it too far, and we all agreed in the end.”

The new “Jingle Bell Rock” may be a playful wink at Lohan’s past, but these days, she’s looking to the future with optimism and a renewed sense of artistic purpose. “Falling for Christmas,” which hit Netflix on Thursday, marks her first starring role in a major movie in nearly a decade. She plays Sierra Belmont, a spoiled hotel heiress who is stricken with amnesia during an ill-fated skiing trip with her fiancé, Tad (George Young).

Directed by Janeen Damian, “Falling for Christmas” borrows heavily from 1987’s “Overboard,” starring Goldie Hawn and Kurt Russell, and its allusions to holiday-centric romantic comedies like 1998’s “You’ve Got Mail” and 2003’s “Love Actually” are no doubt deliberate. What makes the film so watchable is Lohan’s indelible screen presence, as well as her palpable chemistry with Overstreet.

“I love the character, I love the romance, I love a good rom-com,” Lohan said, when asked why she chose “Falling for Christmas” as her acting comeback. “This script had all of that in it. I love the arc that [Sierra] has — seeing somebody that has everything stripped away from them, and how that changes them as a person and brings out such a genuine side.”

Overstreet, best known for playing Sam Adams on “Glee,” said he and Lohan established a natural rapport early on through their shared sense of humor.

Both Lohan and Overstreet had high praise for Perez, whose credits include the 2021 movie musical “In the Heights,” among other films. “She was just the sweetest — really talented, smart, funny, very mature and professional,” Overstreet said. “She came in and showed up and always crushed it.”

Lohan, meanwhile, said working with Perez felt like a throwback to her own days as a child actor. “At this age, I’ve never worked with a kid who was my age when I was in ‘The Parent Trap,’” she said. “So it was really nostalgic for me to see a young girl who was so talented and so focused. I just wanted to hug her all the time.”

“Falling for Christmas” is the first movie in Lohan’s three-picture deal with Netflix, and fans and media outlets have already described the holiday flick as the start of a professional “renaissance.” She recently completed work on “Irish Wish,” a comedy co-starring Jane Seymour and due out next year.

Lohan is honored by the praise, even though she’s called such accolades “overwhelming.” Regardless of how “Falling for Christmas” fares, she sees the movie as a major step up for her in Hollywood. Besides starring in the film, she’s also one of its executive producers.

“I like having a bit more control of the process, which is why I wanted to be an executive producer on this — just being a bit more hands-on with the movie as it’s going, and the finished product,” she said. “It’s encouraging me to do more, do great films and give people what they deserve.”

“Falling for Christmas” is now streaming on Netflix. Watch the trailer below.